A reduction in the Federal Funds rate and corresponding commentary from Chairman Powell on Wednesday rattled stock traders as they grappled with the unexpected possibility of only one rate cut. Evidently, those fears have receded on Thursday with the major indices recovering somewhat before a new round of tariffs on China sent stocks diving. Nonetheless, ETF flows reveal the initial reaction hit a few sectors particularly hard and may continue to weigh if easing continues. 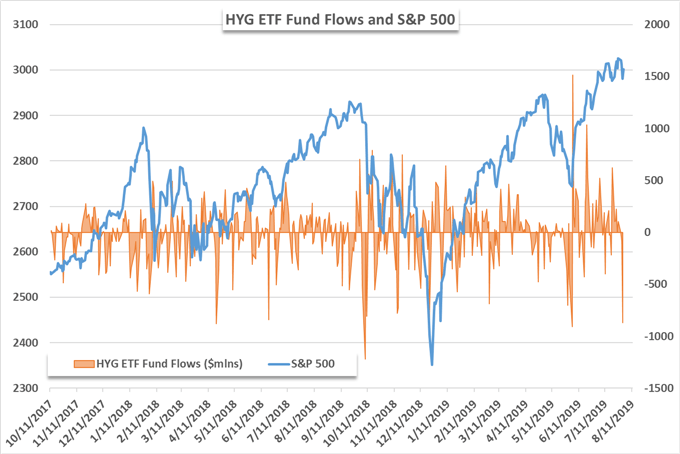 The high-yielding HYG ETF suffered its second largest intraday outflow in the year-to-date as the prospect of future rate cuts rattled risk appetite. Markets briefly believed commentary from Chairman Powell suggested Wednesday’s cut would be a one-and-done which would have fallen short of market expectations of further easing by a large margin. Upon further clarification, Mr. Powell alluded to possible future cuts, but the damage was already dealt as investors shied away from HYG and its reliance on an accommodating Fed. With Thursday’s price action, HYG will likely register a series of inflows as traders renew their search for yield. Still, Wednesday’s outflow put a dent in net flows in the year to date for HYG with the total slipping to $4.5 billion.

Financials and the Fed Funds Rate

Another fund that fell under pressure was the bank-tracking XLF ETF. As members of the financial sector come to terms with lower interest rates and therefore lower profit margins, the fund registered its largest intraday outflow in the year to date at -$588 million. Since the cut was widely expected, one could argue the outflow was due to general risk aversion and is not indicative of a deeper theme at play in the sector. 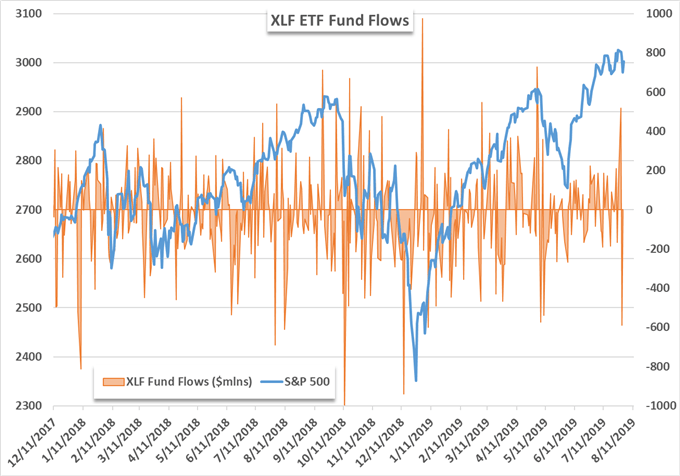 However, an underlying current is more readily apparent over the longer-term as the fund has witnessed year to date net outflows of -$1.7 billion whereas the broad-market tracking SPY, IVV and VOO ETFs have recorded nearly $7.5 billion in inflows. The divergent capital allocation suggests investors have been pricing in rate cuts throughout the year, shying away from a sector with particular sensitivity to lower rates while seeking exposure to broader equities and yield reflected by the demand for HYG.

Financial Sector has Underperformed in 2019 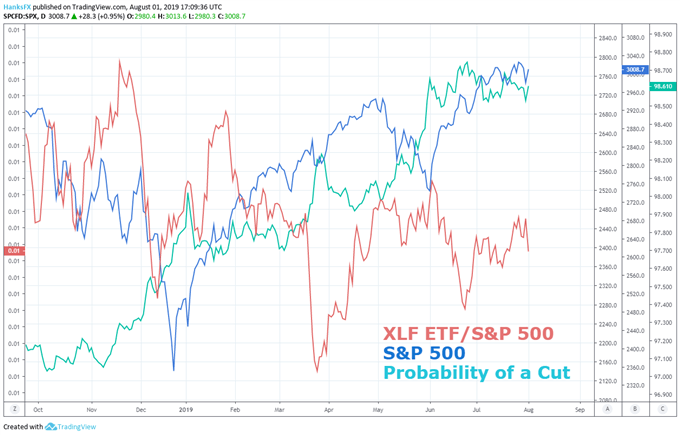 As market participants continue to hash out the probability of future cuts, the financial sector and XLF may see inflows if investors find the initial rate cut odds – three cuts of 25 basis points by year end - to be too optimistic. That sentiment was displayed in Wednesday’s selloff and if it reemerges, could pressure equities further while XLF enjoys relative strength.

That is not to say XLF will be undamaged by a broader-equity selloff, but it could result in a strengthening XLF to S&P 500 ratio which presents a trading opportunity if it emerges July’s cut was in fact a one-and-done. However, the decision to implement another rounf of tariffs on China has greatly increased the odds of further cuts, which threatens the premise of this trade. For more updates and analysis on these themes, follow @PeterHanksFX on Twitter.

Read more: Bitcoin Price Chart is Coiled like a Spring, will it Bounce or Break?