As expected, Asia Pacific benchmark stock indexes traded lower after Wednesday’s Federal Reserve rate decision. During the prior US session, the S&P 500 closed at its lowest in more than 15 months as the Fed offered more hawkish forecasts compared to what markets were anticipating. As a result, the shock translated into aggressive risk aversion as markets brace for what may be a rocky 2019.

In Japan, the Nikkei 225 gapped lower as it declined more than three percent heading into Thursday’s close. This would be its worst performance in a single day since late October. Australia’s ASX 200 fell roughly 1.34% as it aimed for its lowest close in more than two years. South Korea’s KOSPI declined about 1.36%, but it remained within its general trading range in recent weeks.

China’s Shanghai Composite was down about 0.82% as it aimed for its lowest close in two months. Lately, Chinese equities have been trading lower after tax cut bets were disappointed. Although today State Taxation Administrator’s Vice Head, Sun Ruibiao, noted that the country will study a new round of ‘substantial’ tax cuts.

Looking at FX, the pro-risk Australian and New Zealand Dollars traded lower as anticipated. I have re-entered short NZD/USD given the recent fundamental and technical backdrops. The former failed to hang on to minor gains on a mixed Australian jobs report. The anti-risk Japanese Yen traded higher as it focused on sentiment as opposed to a largely unchanged BoJ rate decision.

S&P 500 futures are down about 0.75% heading into European market open. With that, we may see the DAX and Euro Stoxx 50 trade lower which could further weaken AUD and NZD as JPY gains. The British Pound and FTSE 100 look to the last BoE rate decision of the year. A cautious tone from the central bank might support local stocks given that they have projected GDP slowing about 10% in a ‘disorderly Brexit’.

Given the hawkish Fed, emerging markets may find themselves back under pressure. The MSCI Emerging Markets Index closed Wednesday at its lowest since late October. Further declines may see it test the 2018 low at 37.58 which is also just above the February 2017 low. This is after failing on numerous occasions to overturn the dominant downtrend seen this year. A close under 37.39 may open the door to more weakness ahead. 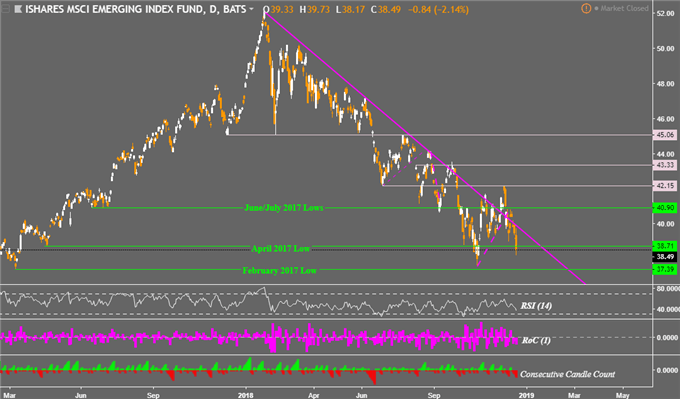