The Bank of Japan kept its monetary settings on hold yet again Thursday, but the Japanese Yen didn’t move much on the news. Market focus was firmly on another central bank- the US Federal Reserve.

The Fed raised interest rates on Wednesday, as had been widely expected, it also suggested that fewer rises could come in 2019, and that action from here could be more dependent on the economic data flow than it has been. At face value this looks like a relatively ‘dovish’ package, but the markets had clearly hoped for even more and the bout of risk aversion seen since has supported the Japanese Yen.

For its part the Bank of Japan left its key short-term policy balance rate at -0.1% and maintained its ten-year Japanese Government Bond yield target at 0.0%. It remains committed to its now-ancient policy of extreme monetary accommodation until such time as domestic inflation sustainably reaches an annualized rate of 2%. At last look it was well below that at 1.4%, with the 2% target rate now not achieved since early 2015.

USD/JPY had risen previously as markets judged the Fed at least less ‘dovish’ on interest rates than they had hoped. However, the pair made no further gains after the BoJ stuck to its guns. 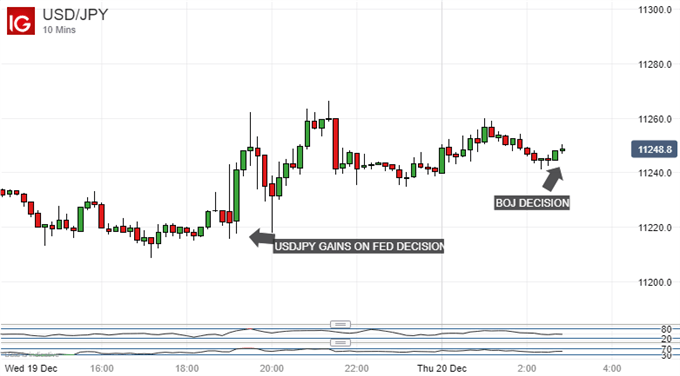 The US Dollar is still arguably winning the ‘battle of the havens’ with the Japanese Yen, with USD/JPY still quite close to its 2018 highs. 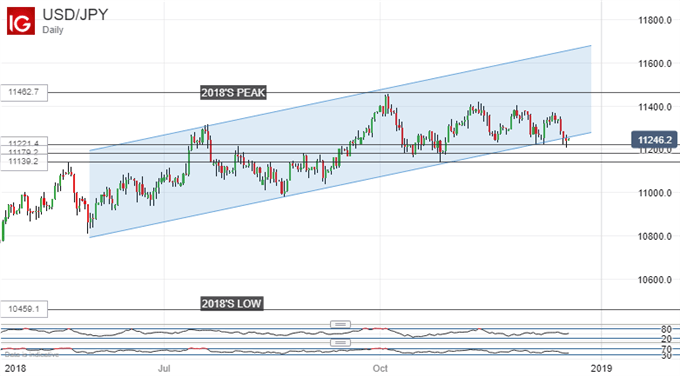 That said this week’s Federal Reserve interest rate rise has sparked an immediate ‘risk off’ reaction in the markets, which had clearly hoped for more 'dovishness' on interest rates than they got. Investors have decided that caution is warranted now, and USD/JPY has slipped below the uptrend channel which had previously been in place since June. Focus now is on a support zone between this month’s lows and the 113.29 low of October 26.

If Dollar bulls can defend this zone, then USD/JPY’s uptrend could yet get back on track. If they can’t look out for deeper falls, but the usual caveats about holiday-thinned trading will probably apply through next week.