What do ASEAN and Emerging Markets Face in Final Weeks of 2018?

Broadly speaking, the US Dollar outperformed this past week thanks to a combination of the following. First, Brexit fears sent the British Pound broadly lower to the benefit of the greenback. Second, 2019 Fed rate hike bets improved after weeks of fading. Finally, aggressive risk aversion on Friday benefited the US Dollar as key Chinese economic data underwhelmed, increasing global growth fears.

For most emerging market currencies, particularly in the Southern eastern Asia region, this spelled trouble. On the table below, the greenback outperformed against the Singapore Dollar, Indonesian Rupiah, Malaysian Ringgit and Philippine Peso. Given that their associated countries have key trading relationships with China, more weakness from the world’s second largest economy provided jitters as anticipated. 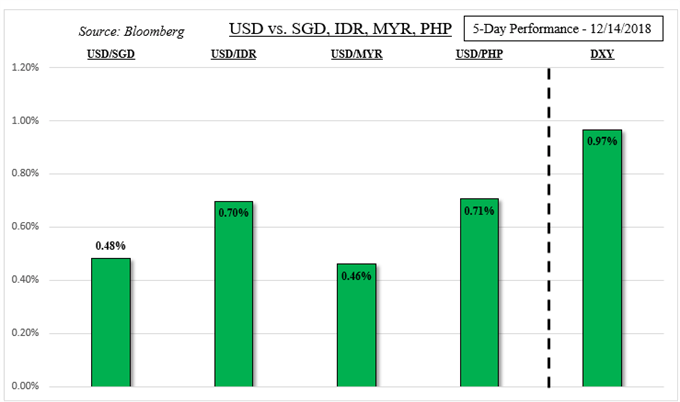 The Philippine Peso particularly underperformed, focusing more on trade developments than the central bank holding rates unchanged at 7.75%. Not only did the trade deficit widen to its largest on record, but estimates for the current account deficit in 2019 increased. Generally speaking, when imports outpace exports, a currency can depreciate as demand for it falls (see chart below). As a result, USD/PHP depreciated the most in a day in over seven months. 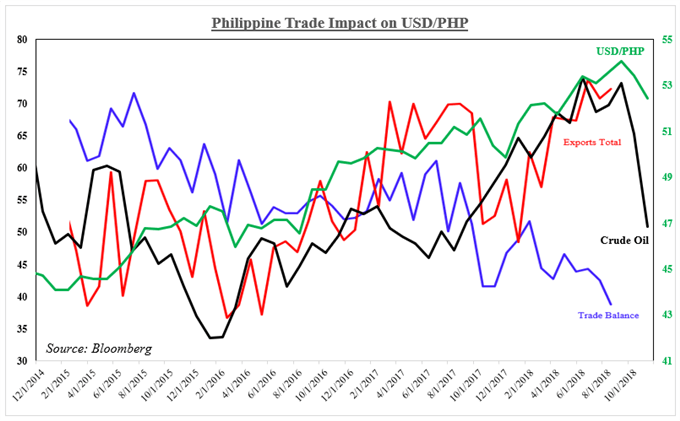 As we approach the final weeks of 2018, the regional economic calendar starts to thin out but there a couple of key events left. From Indonesia, we will get their trade balance report. Like the Philippines, Indonesia has seen net exports (another word for trade balance) in the deficit territory at multiple points this year. With the trade deficit still expected at -$790m in November, we may still see IDR downside pressures.

Then, we will get the Bank of Indonesia rate announcement on December 20, economists’ are anticipating a hold in the 7-day reverse repo rate at 6.00%. However, the central bank may signal that it is not done raising rates with a hawkish Fed and domestic core price pressures rising this past year. In addition, the central bank is still intervening in the markets to support its currency.

Whether or not the Indonesian Rupiah, or other emerging market currencies can find any support in the remaining weeks of 2018 will likely depend on the Fed and global growth jitters. This week, the Federal Reserve as anticipated to raise rates a fourth time this year. Expectations of hikes in 2019 have aggressively faded in recent weeks.

If the central bank still commits to hiking perhaps three times in 2019, the US Dollar could be in for an aggressive rally. A more cautious tone may do the opposite. In addition, the central bank is going to have a press conference for every meeting starting next year. This places more emphasis on how data performs between interest rate decisions.

In the US, this week also contains finalized third quarter GDP readings and the Fed’s preferred measure of inflation, PCE. Data has been tending to increasingly underperform relative to economists’ expectations as of late, opening the door to a downside surprise and weakness in the greenback. Finally, emerging markets could still be at risk to declines in global stock markets. The S&P 500 closed Friday at its lowest since April, this could insinuate downtrend resumption.

Read my ASEAN Technical Outlook to see what moves USD/MYR, USD/PHP, USD/IDR and USD/SGD could also make next!