Will China Add Fuel to Risk Aversion? PHP May Face Rate Hikes Next

This past week was ugly for global benchmark stock indexes, the S&P 500 fell about 3.82% which was its worst 5-day performance since March. The backdrop for market pessimism appeared to be a combination of disappointment in the G20 Leaders’ Summit and increased concerns about global growth slowing. The latter was fueled by perhaps unfounded fears about an inversion in the US yield curve on certain maturities.

The US Dollar was unable to capitalize on gains as a safe haven, rather it fell as 2019 Fed rate hike bets dwindled. For ASEAN FX, this resulted in a mixed week. While emerging markets can take a sigh of relief should the pace of interest rate hikes ease, fears of slowing global growth are not ideal. We saw the Indonesian Rupiah depreciate the most while the Malaysian Ringgit outperformed (see chart below).

USD/IDR aggressively rose as the Emerging Market shares resumed their dominant downtrend this year. But, the Bank of Indonesia stepped in to stem a selloff. The central bank set the spot rate on the currency pair to 14,507 on Thursday. Meanwhile, the Philippine Peso also performed rather poorly despite prospects of OPEC crude oil production cuts. The commodity is a key import for the nation and directly impacts inflation rates. 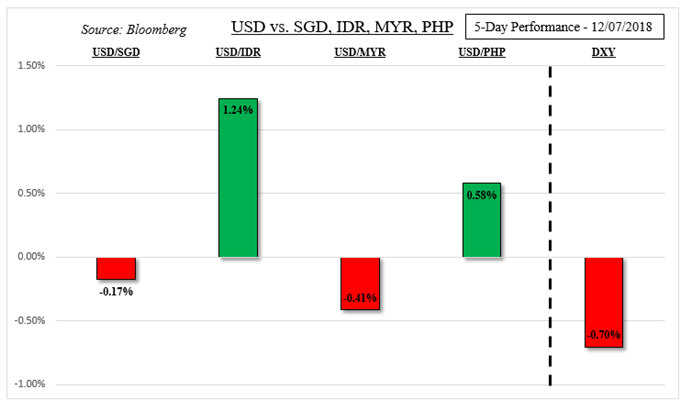 In the Asia Pacific region next week, investors will be watching a couple of economic statistics from the world’s second largest economy. At an unspecified time, Chinese aggregate financing will cross the wires and that is anticipated to increase by 1350.0b in November. This is after a very weak month in October. But, a rebound is expected as the government slowly pushes for stimulus to aid the economy to a certain extent.

Then towards the end of the week, we will receive Chinese industrial production and retail sales. These readings will give the world an idea of the economy’s activity as it slows towards a near-decade low. Recent manufacturing PMI outcomes continued to show signs of weakness. Should the data disappoint, China slowdown concerns could fuel more risk aversion and bode ill for regional ASEAN currencies.

With that in mind, traders should keep a close eye on how the MSCI Emerging Markets Index performs this week. The index once again struggled to push above the descending trend line from earlier this year. Prices are now eyeing the April 2017 lows around 38.71 before facing the current 2018 low just above 37.39. Should global growth fears continue reverberating, its downtrend may resume. 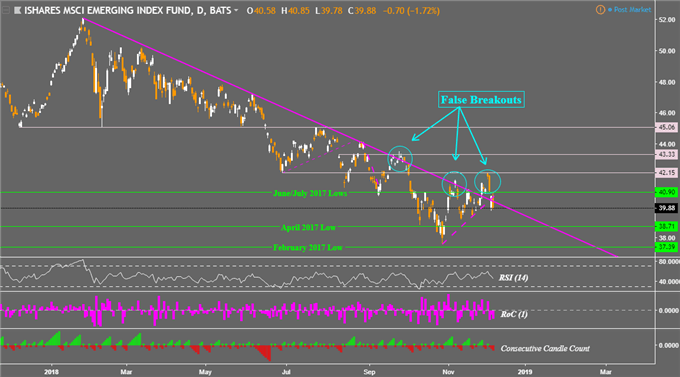 Within the Asia Pacific region, Philippine Peso looks to December’s BSP rate decision. The Philippine central bank is anticipated to leave overnight borrowing rates unchanged at 4.75%. Lower oil prices have aided to reduce headline inflation. However, the central bank has hinted before that it may not stop its tightening cycle. Reflation fears though could become an issue amidst announcements from OPEC to cut production. With that in mind, the BSP may keep the markets ready for more hikes down the road.

Outside of the region, keep a close eye on how the US Dollar performs in the week leading into the Fed rate announcement. This past week, Fed’s Lael Brainard hinted that gradual rate hikes remain appropriate in the near-term. Market could take hawkish bets ahead of the central bank rate decision (which is the week after this), boosting the US Dollar against its ASEAN counterparts such as the Indonesian Rupiah or Singapore Dollar.