1. This week saw considerable intra-day volatility across markets as equities continued to struggle in the wake of the FOMC’s hawkish-hold. In Ms. Janet Yellen’s speech yesterday, she laid out a detailed strategy for the Fed’s rate hike plans this year, trying to offer more clear communication after last week’s statement and press conference drove risk-off trends around-the-world.

The big takeaway from this speech was US Dollar strength against most currencies as the Greenback staged a run towards the September high. As the Fed moves closer to hiking rates in 2015, expect flows to continue moving into the Dollar as this is one of the few areas in which investors may be able to forecast higher rates in the not-too-distant future. This could also equate to additional weakness in EUR/USD and strength in USD/JPY as traders look to play the dichotomy in monetary policy between these economies. In Europe and Japan, inflation has been under-performing to the point that many have begun to anticipate additional stimulus from these Central Banks.

This leads to the alignment of risk-trends across asset classes in which equity strength under the presumption of American economic health brings higher stock prices, a stronger dollar, a weaker Euro and a weaker Yen. This may also bring GBP-strength, as many traders are expecting the UK to raise rates shortly after the US as this is one of the few other economies seeing actual inflationary pressures inside of their economies.

The under-side of this dollar strength is the fact that continued strength in the Greenback will eventually hit American exports (making American exports more expensive internationally, and making imports cheaper by comparison), which will eventually hit American corporate earnings (which are the closest things to a direct driver of stock prices). But those are issues for down-the-road, as the Fed is trying to divert a disaster here.

Should that disaster-like mentality envelop equity markets, and given next week’s slate of data, it could – traders can look to play risk aversion trends by looking at short stocks, and short-USD against the Euro and Yen as rate-hike and stimulus bets unwind previously well-established trends. This would be long EUR/USD and short USD/JPY as those longer-term, bigger-picture trends unwind should risk aversion continue to increase.

In the chart below, we’re looking at potential resistance levels on the US Dollar. We’ve just set a 5-month high, and after that we could see resistance at 12,149 (the March 2015 high) and just above at 12,162 (the 12-year high on the FXCM Dow Jones Dollar Index). 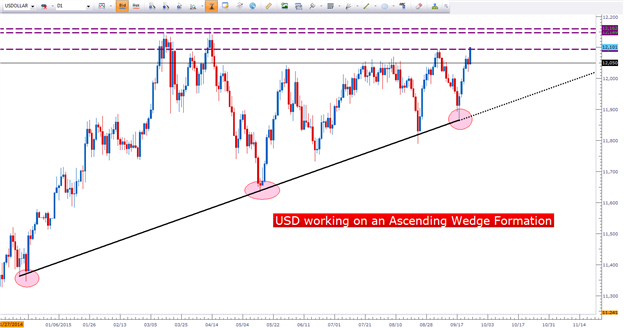 2. Japan deflates: Plunging oil prices have snared another victim, as the Bank of Japan reported negative inflation for the month of August, printing at -.1%. CPI less food and energy, printed at .8%, far below the bank’s 2% annual inflation target. The fact that Japan continues to miss inflation targets while the stimulus engines are running at close-to-full steam has created the theory in markets that Japan will roll out more stimulus in the future. The problem is that Japanese QE, in its current form, would be difficult to expand as the bank is monetizing every bond that they’re printing. The prevailing thought is that any additional QE-overtures would be directed at local government debt and projects bonds in an effort to revive the municipal economies within Japan, hoping that a collective revival of the smaller economies within Japan would spell a groundswell of growth for the larger economy as-a-whole.

This sets up the Yen to be an attractive way to play current ‘risk-on’ and ‘risk-off’ themes. As health returns to markets and as stocks stage higher, expect the USD/JPY to do the same as stimulus bets for Japan increase while rate-hike expectations continue to move higher for the American economy. And as ‘risk-off’ themes envelop markets, look for stocks to move lower along with USD/JPY as rate hike bets for the United States diminish along with stimulus bets for Japan. We discussed this theme in the article, the Yen as the Safe-Haven of Choice, and the same type of theme could be applied to the Nikkei, which set a new 8-month low intra-day during yesterday’s trading session. 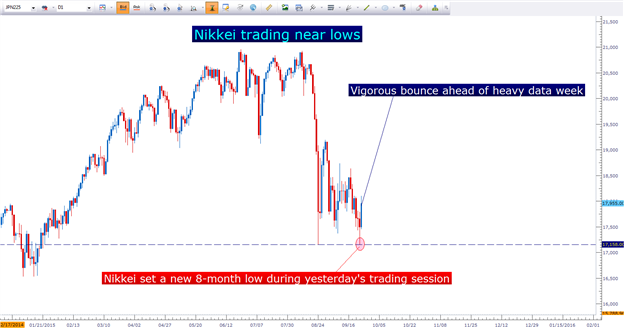 3. The Calendar is loaded for next week – expect volatility: Many headlines this morning are indicating that order has been restored after Yellen delivered a cleaner message from the Fed on rate hike plans for 2015. Be very careful with this logic…

Next week is loaded with high-impact data, and with the moves and volatility seen this week we are likely seeing traders square-up positions ahead of a heavy week of data. Rebounds and retracements will often take place in these environments, which is what makes day-trading on non-NFP Fridays complicated, as trends that define price action for the previous week give way reversing prices as traders protect profits.

There are high-impact announcements every day next week, and we’re seeing data out of the United States, Europe, Canada, and China: All economies that have been ‘pressure points’ across markets. Of specific note – we’re getting European inflation data next week, and this can be a big determinant for how traders price in future-stimulus hopes for the continent. Expect bad news to be good here (for risk trends), as under-performance in inflation would increase hopes for additional stimulus, which would likely drive the single currency lower. Positive prints would spell the opposite; or diminished hopes for future additions to the ECB’s stimulus campaign.

Canadian GDP comes out on Wednesday with Chinese Manufacturing PMI on Thursday. And on Friday – we get ‘the big one’ with Non-Farm Payrolls with an expectation of 200,000 jobs to have been added to American payrolls during the month of September.

And for the United States, we have plenty of data. We may finally be in a space where ‘good is good’ on the US data front, as positive data prints would equate to strong rate-hike expectations, which should drive USD-strength.

Below, we’re looking at the high-impact announcements scheduled for next week. With markets on edge and after many fits and starts to volatility this week there is a large amount of uncertainty out there. Be extremely careful navigating through the next weeks’ worth of data. 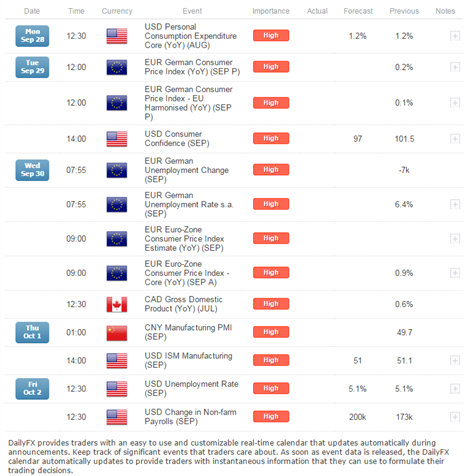