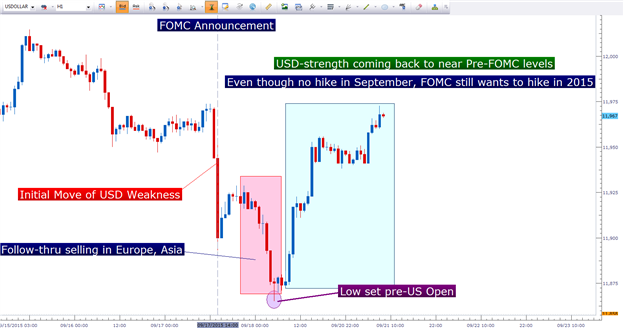 Setups Abundant in the Wake of FOMC

1. Last week was big: We heard from the Fed, and we received the ‘no hike’ announcement that many were hoping for, and then we saw stocks around-the-world sell-off. This is the exact opposite of what many were expecting, as word of additional ‘especially accommodative’ policy has been the fuel for strength in stocks and risk-markets for the past six years.

The big takeaway from last week’s FOMC announcement is that rate hikes are coming. As Ms. Yellen said during the press conference, the bank wants ‘just a little more time.’ We’ve heard from three different Fed officials since Thursday’s FOMC announcement indicating as such. San Francisco Fed President John Williams, St. Louis Fed President James Bullard and Richmond Fed President Jeffrey Lacker all spoke with a hawkish tint towards the additional Fed meetings on the calendar for this year, with numerous statements from each that indicate a hike in 2015 is in the cards. Those meetings are in October (no press conference scheduled) and December, and as Ms. Yellen had said on Thursday, all meetings are ‘live meetings,’ and can bring a change in rates.

The US Dollar has moved along with this news. The initial reaction was aggressive USD weakness, as rate expectations were hit almost immediately with this dovish tone taken on by the Fed. The selling in the greenback continued through Asia and into Europe, but by 5AM EDT the following morning, the US Dollar had found a bottom and began ascending higher. This strength has continued all the way into this morning, and now the US Dollar is almost as high as before FOMC, shown on the chart below:

2. Higher rates from the US (and strong rate expectations for coming quarters) could bring back one of the most attractive themes in markets: The Carry Trade.

We’ve already heard from Goldman Sachs on this theme: After the hawkish hold last week, Goldman came out with a forecast built around additional European weakness. At the last ECB meeting, Mario Draghi indicated that the European Central Bank could ratchet up European QE to offset weakness in the economy, and with the Fed taking on a hawkish stance and looking to begin tightening policy in the coming months, a strong deviation could develop between the Euro and the US Dollar. Goldman made a call that the Euro may drop up to ten cents (1,000 pips) against the US dollar as the ECB looks to ratchet up their stimulus to try to meet inflation targets. This means that the ECB would need to extend their current €60 Billion/month program through the end of 2016, and perhaps even running the program into mid-2017.

More-to-the-point, this divergence in monetary policy (ECB loosening policy while the Fed tightens) could open up an extremely attractive long-term position on the short side of the Euro. This could mean resumption in the down-trend that started with the announcement of European QE in May of 2014 and ran for over 3500 pips into March of this year. Since then, EUR/USD has been channeling higher (in a ‘big picture’ bear flag formation, indicated with a red label on the below chart: 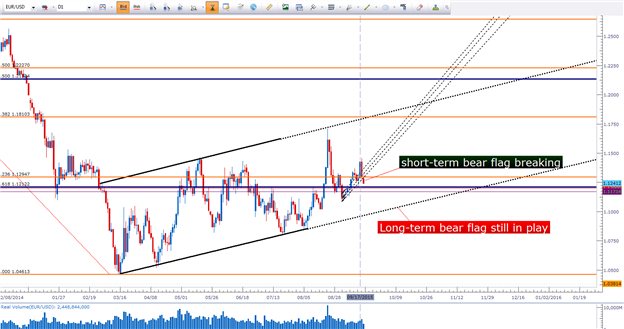 Notice that within the ‘bigger picture’ bear flag is a shorter-term, more abbreviated bear flag formation that had been setting in since the beginning of September (as indicated by the green label). That shorter-term bear-flag is in the process of breaking as the support line of the channel is beginning to give way. We caught support on the bottom of this channel to close out last week, and this week opened with a test of resistance off of previous support as sellers drove prices lower.

In the scenario in which risk-trends return as normalcy finds its way back into markets, the short EUR/USD trade could become one of the most attractive as this clear dichotomy in monetary policy between Europe and the United States would be expected to continue as the US looks to continue rate hikes into 2016 while Europe looks to improve inflation by embarking on currency-weakening policies.

3. Similar themes on the Yen, but with slightly more fear: Another bank faced with the dire prospect of weak inflation is in Japan. Three years of Abe-nomics and Japan is still unable to come anywhere near the 2% inflation target that they’ve set. The Long USD/JPY trade was one of the most attractive markets to be in from Q4 2012 as Shinzo Abe ushered in his ‘three legs’ approach to shoring up the Japanese economy. The only leg of the three that seemed to work out was QE, and with a contracting economy facing even more pressure from a Chinese slowdown, it’s rational to assume that the bank might look at even more Yen-intervention in the not-too-distant future.

This has set up a fairly strong correlation between US Stocks and USD/JPY. The ‘Risk-Off’ or ‘panic’ type of environment has brought on significant Yen strength as US stocks have sold off. We discussed this topic at more length in the article, The Yen as the Safe-Haven Vehicle of Choice. And when calm does return, stocks have shown a tendency to drift higher along with the Dollar-Yen. The theme behind each of these moves is fairly aligned; as a growing and healthy economy that would denote higher stock prices would see rate hikes from the US before Japan, with perhaps even another round of Japanese QE as their economy attempts to turn the corner. While on the flip side, a ‘risk-off’ type of market that would see stock weakness would likely spell an unwind of the carry trade in the USD/JPY that’s seen the currency pair move up by more than 50% in the past three years. The chart below highlights the pair with recent levels of interest. The lines-in-the-sand on the pair are 121.50 for ‘risk-on’ or strength, with prices below 119.00 indicative of ‘risk-off’ or ‘panic,’ in the USD/JPY market. 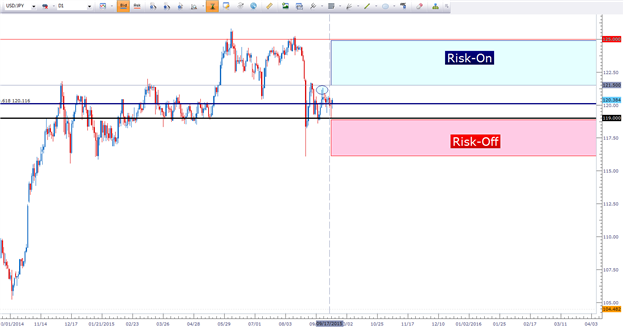 4. One bank that may be set and ready to hike is in the UK: While much of the financial world was watching the Federal Reserve last week, the Bank of England did a beautiful job of positioning itself for rate hikes in early 2016. On Friday of the previous week, Ms. Kristin Forbes of the MPC made mention that rate hikes for the UK ‘may be coming sooner rather than later.’ And last week, UK wage growth printed at a six-year high followed by comments from BOE president Mr. Mark Carney that hikes were looking likely in early 2016. We discussed this theme in more depth last week in the article, Long Sterling as the Most Attractive Way to Trade FOMC.

Like the United States, the UK is one of the few economies seeing signs of growth. And also like the United States, the UK has been sitting on near-flat rates for years while instituting Asset Purchase programs with the design of bringing inflation into their respective economies. It seems like all of that work is beginning to pay off, as the initial signs of inflation (and hopefully growth) are beginning to show in the data prints (this is why such a heavy focus has been on wage growth – the precursor to inflation).

And while the UK (or the US for that matter) might not be ready to hike rates tomorrow, there is a clear divergence between these economies and those in Europe, China or Japan where lackluster growth and meager inflation will likely need to be offset with even more ‘extraordinarily accommodative’ monetary policy.

From a technical perspective – GBP/USD is at an interesting place. The bullishness in the Sterling last week and the strong pop higher after FOMC has created a new short-term up-trend with higher highs and higher lows; and the projected trend-line connecting the lows of May to the lows of August is functioning as near-term resistance in the Cable. We’re currently supported on the 50% Fibonacci retracement of the most recent ‘major move.’ Traders can look for support to develop at the early portion of this week at or above the 1.5450-1.5515 zone before triggering long. 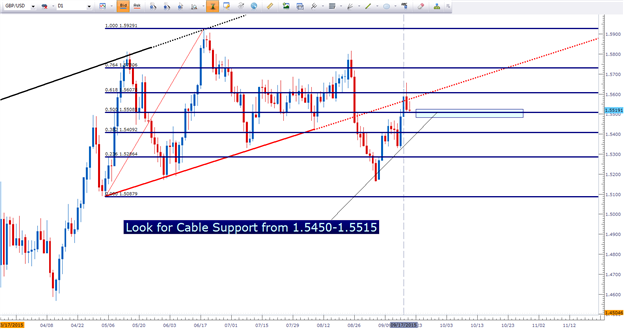 Alternatively, traders can look for a ‘cleaner’ way of trading GBP-strength by avoiding the US Dollar altogether. For this theme, long GBP/CAD, GBP/AUD, GBP/NZD and short EUR/GBP could prove attractive, as monetary policy divergence could be expected to continue between the UK, Europe and Commodity-bloc currencies.