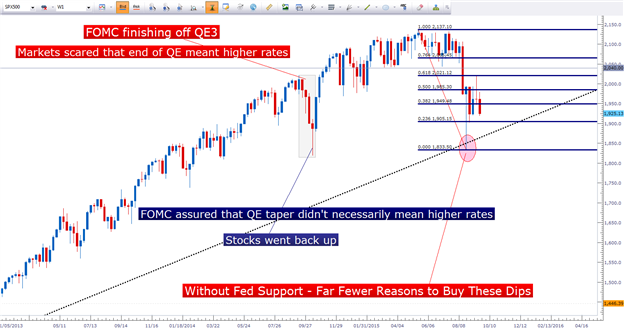 1. One of the surest strategies across markets over the past 6 years has been ‘buy the dip.’ As in, whenever stocks sell-off, simply wait for support to show via price action, and then buy with a stop below the lows. With Central Banks around-the-world providing stimulus to keep markets afloat/drive prices higher, investors had the biggest forces in the economic world behind their backs, like a cool trade wind pushing a ship through the sea.

But with the Fed taking on a hawkish tone on rate hikes with targets cast towards the October or December meetings, that trade wind appears to be dying – and the ‘buy the dip’ strategy that’s been so relevant since the lows of the financial collapse appears to be bringing diminishing marginal returns.

While the Fed raising interest rates a meager 25 basis points to control inflationary pressures in the US economy shouldn’t bring on market chaos and mayhem; with this clear shift in Fed policy from dovish support, investors no longer have the same confidence that stocks will continue to go up because the biggest Central Bank in the World is behind their backs and supporting the market with fast and loose monetary policy. This is a clear shift in the environment, and its taking place right in front of us.

This puts the Fed in a tough spot: Price action since the hawkish-hold of last Thursday has been risk-averse in nature, with global stocks selling off and many safe-haven currencies (such as the Yen) seeing strength.

The notable exception to the global equity sell-off has been China, with the Shanghai Composite in positive territory since last Thursday. This just further highlights that the big ‘problem’ in the global economy right now isn’t China, but more likely the Fed’s stance on monetary policy and the lack of communication that’s being delivered to markets.

We had a similar such scenario in October of 2014… This is when the Fed was coming to a close of QE3 and was finishing off bond purchases. Investors were freaking out that the finalization of QE purchases was opening the door to rate hikes. US Stocks sold off en masse, wiping out $1.5 Trillion dollars in market value in a couple of weeks (shown with a red box in the below chart). This is also when the Ebola scare was increasing in the United States, corporate earnings were coming in weakly, Oil had begun its precipitous slide and Germany began seeing slowing growth. But the real trigger here was Fed policy as opposed to any of those other things, because as long as the Fed was supporting markets, bad news could (and was) easily shrugged off. Six years of higher stock prices in the face of numerous bad data points should be proof enough that Fed support was enough to drive prices higher in the face of even the most daunting data points.

What finally gave us relief was Fed reassurance that the tapering of QE did not mean that rate hikes were imminent. And here we are, a year later, battling the same problem with even fewer solutions.

So, while the convergence of current factors of a slowdown in China, continued weakness in Oil and commodities, and a brisk slowdown in Emerging Markets are all adding pressure on global equity markets, the bigger issue right now is the Fed.

Central bank support has driven US stocks to all-time-highs. The S&P bottomed out at 666 in the Financial Collapse, and TARP, QE1, QE2 and QE3 provided support to investors in an extremely low-yield environment (with a dearth of available investment options) that continually drove stock prices higher.

2. Many markets are aligning with ‘risk on’ and ‘risk off’ themes: With this brutal amount of uncertainty in the environment we’ve seen risk-aversion increase as investors duck for cover as the Fed walks towards higher rates. One of the benefits of this to the trader is that it brings in many correlations that could make positioning slightly more simplified than a regular trading environment. As in – if investors are selling out of risky investments, that’s the type of behavior we can see across asset classes in various markets. Things like the Yen strengthening while the Nikkei and S&P 500 sell-off, as investors unwind short-Yen carry trades (risk aversion) while also selling stocks (also risk aversion).

Some of the more attractive markets for these themes are in FX for a few reasons. 1) The market is open 24 hours, so as ‘big items’ take place during the Asian or European session, traders can actually manage their positions 2) The two-sided nature of currency pairs can act like an accelerant in a trend. Take GBP/JPY as an example, as risk aversion would not only likely bring Yen strength but Sterling weakness. 3) Flexibility with how aggressively you want to trade a move.

For the risk-off theme, we would likely see unwind of all of those risky trades over the past six years. Stocks are an obvious target as they’ve been essentially getting pushed higher by global QE, but more to the point the Yen and the Euro could be susceptible candidates. Huge QE outlays by the European Central Bank and the Bank of Japan has gotten investors to use these currencies as ‘funding currencies’ for carry trades. As in – if rates are negative in Europe, but positive in the US – why wouldn’t an investor borrow funds in Europe (and make money since yields are negative) and invest it in the United States? Or if rates are negative (or close to it) in Japan, why wouldn’t an investor borrow in Japan and invest in the US or Australia where rates are positive?

The only reason not to do so would be the threat of losing principal, or risk aversion, which is what we are seeing now. So those carry trades in the Yen and the Euro are unwinding as fear continues to permeate the environment, and investors choose to sit on cash rather than low-yielding investments that risks their principal.

So, in this theme of risk aversion, Long Yen, Long Euro and Short Stocks could be the more attractive markets to be looking at.

On the other hand, should risk-on return, the opposite would hold true as the dichotomy in monetary policy would likely spell reversals for these themes. As in, if risk-off returns, investors feel safe enough to go back into those carry trades. We’d likely see prices follow rate dichotomies as carry trades return, so this could bring on Euro weakness, Yen weakness, and strength in equities around-the-world.

The bigger question is what might help this return. Each time in the past that the Fed has walked towards higher rates, markets haven’t shown much affinity for it. With the Fed and Janet Yellen taking a stern stance towards rate hikes that the global economy doesn’t seem to be able to absorb, we’re likely looking at continued risk-aversion until something from the Fed changes.

In the below chart, we’re looking at USD/JPY and the S&P 500. Notice how these risk themes have correlated between these markets, and as risk-aversion continues these correlations will likely tighten further. 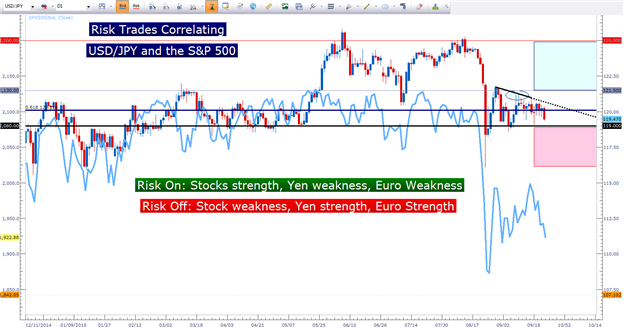