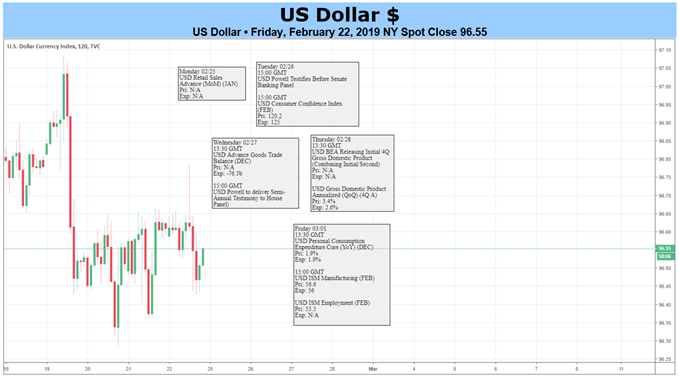 The US Dollar edged lower last week, trimming gains scored in the first half of February but ultimately settling near the middle of the choppy range persisting since mid-2018 yet again. Minutes from January’s FOMC meeting were hardly groundbreaking but the “wait-and-see” tone clashed with the markets’ more overtly dovish disposition, giving USD a lift. Risk trends would undo these gains however.

Optimism about the course of US-China trade negotiations ultimately translated into a cautious risk-on bias for financial markets (albeit not without disruptions). The two sides were reported to be working out six broad memorandums of understanding (MOUs) outlining how to proceed key points of friction. A meeting between US President Trump and Chinese Vice Premier Liu is still pending at the time of writing.

This sets the stage for what is to come ahead. A key risk is the March 1 deadline that Mr Trump and his Chinese counterpart President Xi Jinping set for this round of trade talks at a G20 meeting last year in Argentina. If it lapses, the US may increase tariffs on $200 billion in Chinese imports. If Trump and Liu agree to an extension, the markets will start next week in a chipper mood. If they do not, a risk-off tilt is likely.

The upbeat scenario bodes ill for the Greenback, sapping haven demand. The same logic means the alternative is likely to be supportive. Whatever happens, follow-through will depend on consistency in sentiment – a tall order as global slowdown worries simmer and UK lawmakers hold another decisive Brexit vote – as well as a deluge of event risk informing the outlook on Fed monetary policy.

On the latter front, the spotlight will be on semi-annual Congressional testimony from Fed Chair Jerome Powell. If last week’s FOMC minutes documents proves indicative, he is likely to push back against the markets’ dovish overreach with a more balanced stance. That might nudge 2019 rate hike expectations upward, boosting the Dollar in the process.

From the data side of the story, the fourth-quarter GDP report takes top billing. It is expected to show the annualized growth rate slowed to 2.5 percent. That would be a retreat from the prior period’s 3.2 percent rise but hardly a sign of outright weakness. Retail sales, trade balance and consumer confidence numbers as well as the manufacturing ISM survey are also due. Upbeat results may encourage rates-based USD support.