The Euro faces a difficult session in the final hours of the trading week. A revised set of German GDP figures comes first. Expectations envision confirmation of flash estimates showing growth stalledin the fourth quarter. A steady stream of disappointments on recent data outcomes makes a downward revision into negative territory appear quite plausible however.

Germany’s IFO survey of business confidence is up next. The precipitous drop started in mid-2018 is projected to continue, with the headline sentiment gauge falling to the lowest in over four years. Shortly thereafter, revised Eurozone CPI data is seen matching early projections putting the on-year inflation rate at 1.4 percent, the lowest since April.

Finally, ECB President Mario Draghi is due to speak at the University of Bologna. The remarks are to be made at a ceremony in Mr Draghi’s honor, so it is quite possible that they will not contain significant policy insights. In the event that they do however, the tenor of recent pronouncements form ECB officials broadly suggests a dovish bias is likely to prevail.

Later in the day, the spotlight will turn to a meeting between US President Donald Trump and Chinese Vice Premier Liu He. The latter is in Washington for the latest round of trade negotiations. The markets have been hoping for a breakthrough following reports that officials on both sides are working out six broad memorandums of understanding (MOUs) addressing all their friction points.

The clock is ticking. The March 1 deadline for this round of talks is just a week away. Mr Liu’s visit presents an opportunity to reassure markets by announcing an extension. Sentiment-geared commodity currencies may rise in such a scenario while the anti-risk Yen and US Dollar backpedal. The absence of clear signs of progress might trigger the precisely opposite result however. 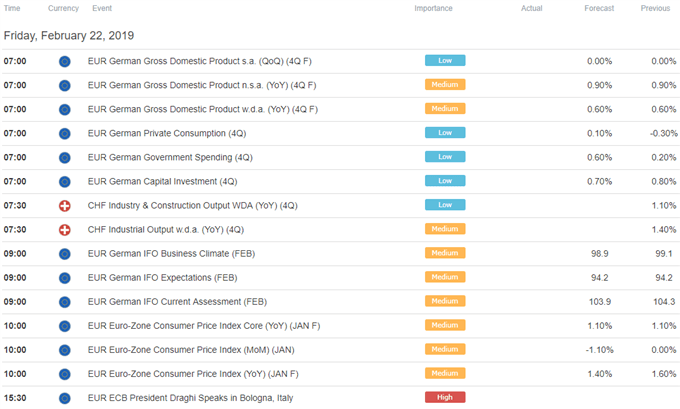