Earnings season will continue this week as the nations largest financial institutions pass the baton to some of the most influential companies in other sectors. As January approaches its end, risk appetite has become rather brittle and the upcoming quarterly reports will likely play a crucial role in either repairing damaged sentiment, or shattering it altogether.

Earnings to be Released January 25 – January 27 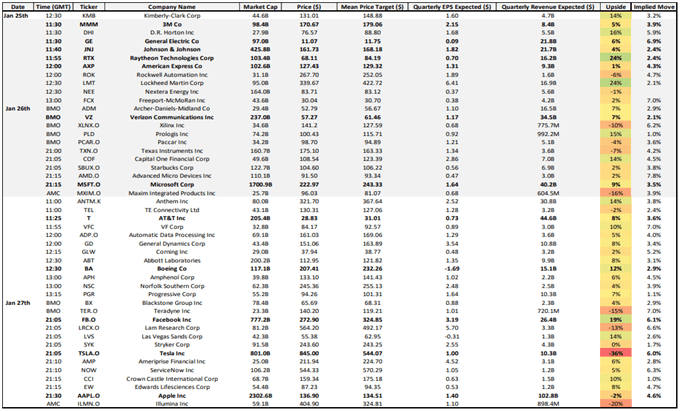 As for the Dow Jones specifically, names like 3M, Johnson & Johnson and Boeing will offer key insight into sectors vital to the economy outside of technology. Boeing was recently included in our list of three stocks to watch in the week ahead due to its recovery efforts and a strong earnings performance could help revive what was once the highest-weighted member of the Industrial Average. Should Boeing reclaim its former place, it would account for more than 10% of the index and could help close the gap between the Nasdaq 100 and Dow. 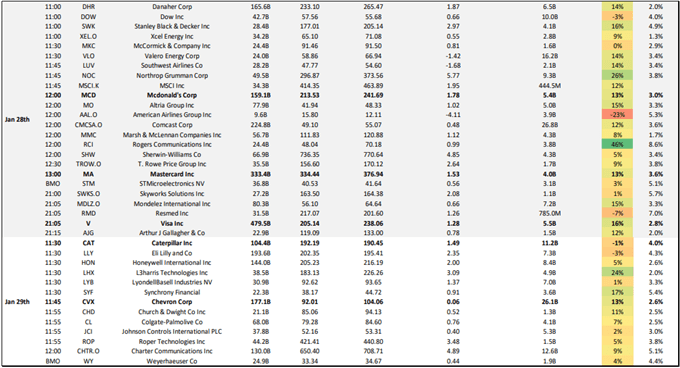 The Nasdaq 100 will also face implications from upcoming reports as technology giants Apple, Facebook, Microsoft and Tesla are set to report next week. They are joined by a plethora of other Nasdaq members, but the four companies alone account for nearly 30% of the entire index. A strong quarter from Netflix offered a kickstart to sentiment surrounding tech earnings, but the behemoths will have to deliver on lofty expectations if risk appetite is to remain intact.

While undoubtedly important, the corporate findings will have to jostle for influence over the market as investors also await a midweek Federal Open Market Committee meeting at which no change to the interest rate range is expected.

Dow Jones Forecast: Three Dow Stocks to Watch in the Week Ahead

Aside from interest rates, market participants will likely parse through commentary on yields and the Fed’s view of inflation. Any indication the Fed will raise rates sooner than expected or will begin to scale back its balance sheet expansion could overshadow earnings and undermine the Nasdaq 100, Dow Jones and S&P 500.With a laundry list of event risk the outlook for US equities in the week ahead is neutral, but the implications that will soon be derived could set the trend for weeks to come.

While the US indices juggle central bank commentary and reports from companies on the ground, the DAX 30 will look to broader economic data. GDP and employment figures are the headliners and are joined by a series of other readings on the economy. That said, DAX 30 volatility might lag that of the US indices and it could track its US counterparts as a result. In the meantime, follow @PeterHanksFX on Twitter for updates and analysis.