The Dow Jones clawed higher to start the trading week as the Industrial Average looked to recoup losses suffered in the last three sessions. In the larger picture, however, the Dow Jones remains within reach of record levels with considerable technical support nearby so concern in regards to the recent turbulence may be overdone. That said, market participants will receive a fresh string of earnings reports this week from key Dow components that could help to smooth dented sentiment – or damage it further.

As the coronavirus pandemic rages and corporations continue to grapple with its effects on commerce and everyday life, many companies have wisely revised earnings estimates. While understandable given the incredibly unusual threat to business activity, these revisions have allowed corporations to effectively move the goalposts of what investors might expect when it comes time to report.

The change in expectations has seen some companies outperform their revised figures – sometimes by considerable margins – which is often followed by an optimistic outlook and therefore admirable quarter for the company in question, viewed as an “earnings beat.” The encouraging report can be met with an increase in the stock’s share price and boost to sentiment while the market totally disregards earnings and profitability compared to just twelve months ago.

To illustrate this point, here is a hypothetical: Where a company may have previously expected to rake in $50 billion in quarterly revenue, revised estimates have created an environment in which traders could rejoice a quarterly revenue haul of only $30 billion because it outperformed the expected $25 billion target the company set itself when it revised its outlook in March. 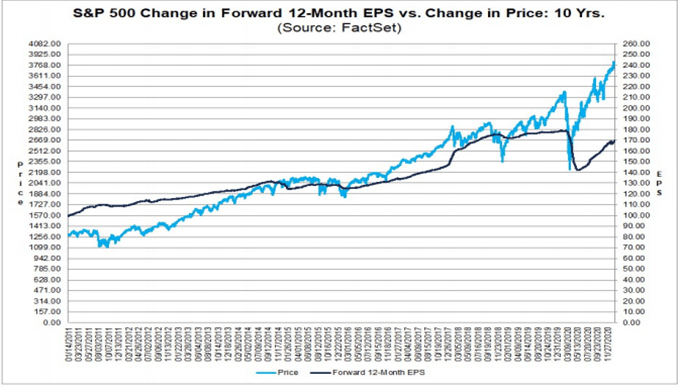 This is not to say revising earnings estimates is wrong or unnecessary because undoubtedly factors have changed, but it does change the way traders and investors should view whether a company “beats” or “misses” in their quarterly report as a “beat” in Q3 2020 could be a historic drawdown in their revenue in the broader picture. 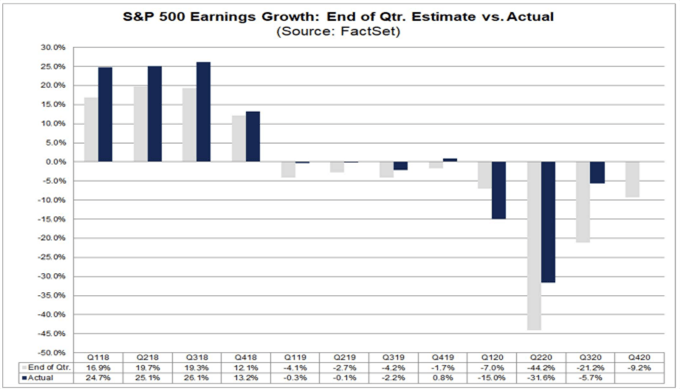 This relationship is evident in the charts above where earnings-per-share of the S&P 500 has not yet recovered to pre-pandemic levels but price has soared higher. Further still, more companies are “outperforming” their targets but those targets still denote negative earnings growth. This phenomenon raises questions of longer-term market health and sustainability of current valuations.

Either way, the upcoming reports possess an innate ability to influence market sentiment. Netflix offered the technology sector a strong start Tuesday afternoon when it popped more than 10% following the release of its report. Still, the report was a prime example of modest financial metrics being supplanted by a vanity figure, in this case subscriber count, which smashed expectations. Follow @PeterHanksFX on Twitter for updates and analysis.