US Dollar Forecast: US Dollar Turns to FOMC Rate Decision, Q2'17 US GDP to Stop the Bleeding

The US Dollar (via DXY Index) finds itself back at fresh yearly lows, but two major events over the coming days – the FOMC rate decision and the US GDP report – could finally offer the greenback a chance to slow its descent and stabilize.

Euro Forecast: Can the Euro Continue to Defy a Dovish ECB and Soft Data Flow?

The Euro faces a telltale period ahead as the bulls’ defiance of a dovish ECB is tested with the passage of top-tier economic data and official commentary.

The British Pound came into this week with legitimate prospects for bullish continuation. But with inflation printing below expectations, that bullish move may be on pause for the foreseeable future.

The Japanese Yen may continue to appreciate against its U.S. counterpart next week should the Federal Open Market Committee (FOMC) soften its hawkish outlook for monetary policy.

The Australian Dollar market can look forward to a US monetary policy call and official local consumer price data, but the RBA may now be a more obvious focus than either.

The Canadian Dollar has been strengthening against its US cousin since early May and that trend will most likely continue as long as further interest rate hikes remain probable.

Chinese Yuan Forecast: To Retrace or to Advance, That is a Question around the Yuan

Looking forward, Chinese regulators’ guidance, July FOMC decision, as well as U.S. data prints are more likely to add mixed moves into the pair; both retracement and breakout are possible for the pair next week.

Prices posted the largest weekly rally since May with the advance now eyeing slope resistance. Here are the updated targets & invalidation levels that matter next week.

This coming week market eyes will be on the FOMC; the DAX looking to follow-through on post-ECB downdraft, while the Nikkei searches for direction.

Crude Oil is pushing away from price resistance as the market anticipates the OPEC review in St. Petersburg will not lead to further supply cuts. 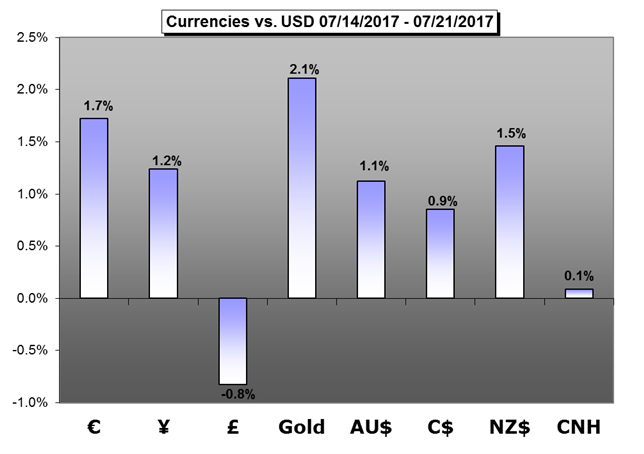