Though the event risk this past week was varied, the effective fundamental motivation was once again derived from trade and competitive policies. Details of these programs are not scheduled, but evaluations by domestic and foreign sources may decide the market’s conviction.

The Dollar was one of this past week’s best performers – and not just relative to other currencies. An ambitious rally from recent congestion was impressive, but its momentum is dubious. Motivation behind the drive was clear in unilateral improvement in US financial conditions via policy change.

The Euro may fall as underlying monetary policy trends reassert themselves, highlighting the contrast between a dovish ECB and most of its G10 FX counterparts.

The British Pound continues to be evidence of the growth that can be had when a currency aggressively depreciates.

The Australian Dollar has lacked the will to rise meaningfully despite supportive economic and political news. That means rates still dominate, which could spell trouble ahead.

The Japanese Yen continues to trend higher (USD/JPY lower) through 2017, but JPY traders may see an important test and notable volatility out of major currencies in the days ahead.

The offshore Yuan (USD/CNH) remained stronger than PBOC’s guided levels as well as the onshore Yuan (USD/CNY) this week, though the spreads against both have narrowed to around 100 pips on Friday from more than 600 pips on Monday.

Gold prices rallied higher again this week with the precious metal up 0.87% to trade at 1230 ahead of the New York close on Friday.

The bid for global equities continues, led by the United States on the back of renewed strength in the ‘Trump Trade’. 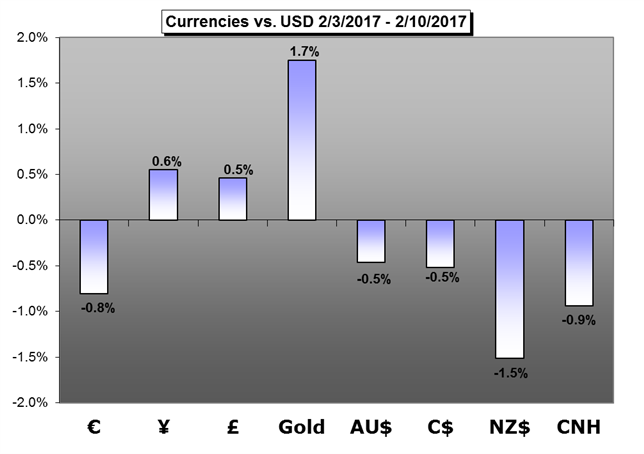