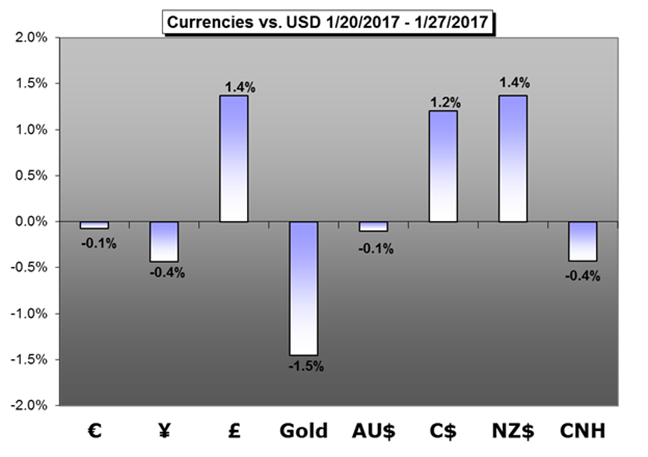 Economic event risk makes a dramatic return in the week ahead as central banks in Japan, the UK and the US offer rate decisions all while top-tier data flows across the wires.

The US Dollar might have been encouraged to rise by supportive data flow and an optimistic Fed but lingering fiscal policy uncertainty severely complicates things.

Despite important data due out over the coming week, there’s not much reason to think that the Euro, broadly speaking, will be able to find much direction. Much like last week, when the Euro’s performance was largely dictated by movements in other currencies – the rally in the British Pound, the ongoing erosion of the US Dollar – the supersaturated calendar over the coming days means the Euro’s own incoming data may take a back seat.

The Bank of England’s (BoE) ‘Super Thursday’ event may shake up the near-term outlook for GBP/USD should Governor Mark Carney and Co. show a greater willingness to gradually move away from its easing-cycle.

Japanese Yen Forecast: How Much Confidence Does the BoJ Have in the Trump Trade?

Next week brings the Bank of Japan to global markets, and while little by way of ‘new information’ is expected, the context with which the bank is communicating to markets makes for an extremely interesting opportunity to gauge what the BoJ might be looking to do in the remainder of the year.

The Canadian Dollar has almost completely retraced the jawboning on January 18 from BoC Governor, Stephen Poloz against the US Dollar.

China will release the Caixin PMI manufacturing print for January on Thursday, which is expected to drop slightly to 51.8 from 51.9, yet still in the expansion territory.