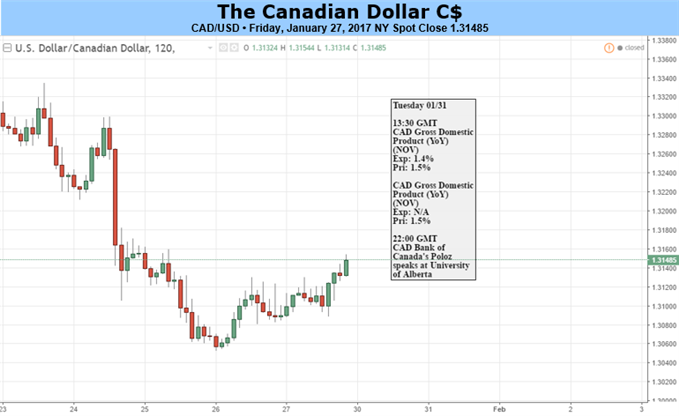 Canada May Win the Trump Trade Game At Other’s Expense

The Canadian Dollar has almost completely retraced the jawboning on January 18 from BoC Governor, Stephen Poloz against the US Dollar. For traders that hoped the Canadian Dollar would begin a renewed run of weakness, the closing final full trading week of January was likely a painful week that could lead to a continuation of the strong-CAD run that began almost exactly a year ago. The chart below highlights the lower high in USD-CAD that was created off Poloz’s remarks.

On January 20, 2016, there was the culmination of the perfect storm of a strong USD in the light of a Federal Reserve that had just predicted four rate hikes in 2016 at the same time Oil was in a free-fall. USD/CAD traded at an intraday high of 1.4689 on January 20 and eventually moved down to 1.2460 in early May. The free fall in Oil ended up finishing out in early February, but there were views that oil-dependent economies had been oversold and it was time to cover short positions. The short covering in the Canadian Dollar vs. the USD led to the Canadian Dollar ending 2016 as the strongest major currency compared to the USD on a relative basis, gaining nearly 3%. In 2017, we continue to see bursts of Canadian Dollar strength that consistently fail to push USD/CAD below 1.3000 or 1.3800 on EUR/CAD. However, the developing trade rhetoric may pave the path for a rather surprising resumption of economic strength.

The economic calendar over the previous week lacked significant traditional economic announcements, but the trade talks rightfully caught the market’s attention and delight. First, there was a discussion of trade negotiations between the US and NAFTA trade partners being redrafted and focus shifted to the disagreement between US President Trump and Mexican President Pena Nieto over the funding of the proposed border wall of the US-MX Border. In this scenario, it is being perceived that any weakening of Mexico’s economic relationship with the US would likely be Canada’s gain. Recently, we heard the following words from a Trump advisor: When Pena Nieto refused to pay for the wall, President Trump sent this string of fateful tweets:

The meeting eventually was canceled. A Friday morning Tweet followed these tweets:

Mexico’s potential economic loss from redirected U.S. trade deficit funds could be Canada’s gain, and the positive shift in Canadian trade relations aligned with new a push through of the long-sought, but Obama-fought Keystone XL Pipeline due to environmental protectionists. However, the Keystone Pipelines new proposal would help Canada’s hard-to-export Oil to the market. To get a sense of how impactful the Pipeline is presumed to be when President Obama struck down the Keystone XL Project in 2015, TransCanada came out with a $15 Billion lawsuit over Obama’s decision to cancel the project and sued NAFTA for an “arbitrary and unjustified,” decision.

Arguably, the reinstatement of the Keystone Pipeline alongside the stability inOil Prices despite rising supplywith the “unusually positive view of Canada,” statement from Trump’s business advisor Schwarzman could provide a sustainable economic boost for Canada.

Next week provides YoY GDP data from November on Tuesday where we’ll look for an improvement on the prior reading of 1.5%. One of the clearer markers for a potential relative gain of the Canadian Dollar to the USD is the spread tightening between US and CA Government 2Yr yields. From July to November, we saw the spread between US & CA Government 2 Yr yields widen from .0591 on July 5 to a high of .4788 between the two on December 28. The US 10-year premium more than doubled from last springs low of 32 bp to 81 bp high in late-November. On December 28, USD/CAD traded to 1.3598 as a widening spread favors USD strength in the current environment and a narrowing or stabilization of yield spreads leads to a stronger CAD and relatively weaker USD.

If the yield continues to narrow, we may see further CAD strength from a combination of positive economic surprises. When looking at the chart, a break below 1.3000 would help validate that we’re seeing a resumption of CAD strength through a long-term barrier of support on USD/CAD and resistance on CAD. The spreads are always worth watching because a widening of the spreads again could mean the USD strength that has been dormant in January is resuming. 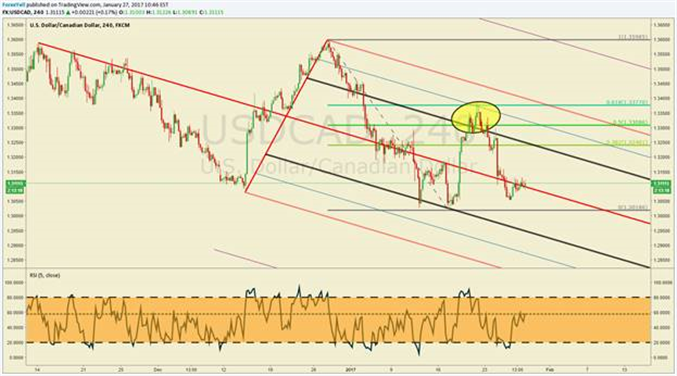