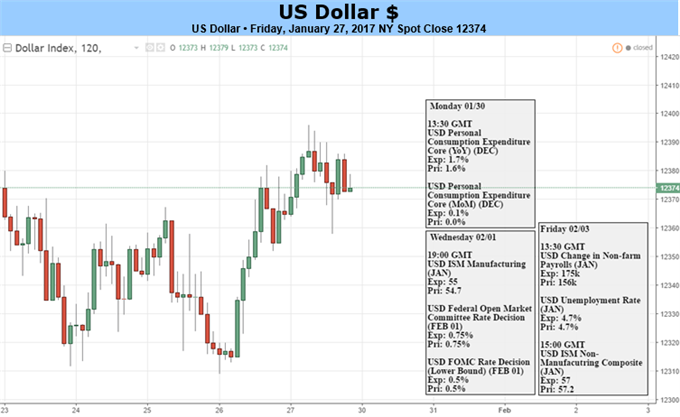 Has the US Dollar matched our forecast so far in the first quarter of 2017? Find out here!

The week ahead brings with it the return of heavy-duty economic event risk. The Fed’s favored PCE inflation data, the ISM manufacturing activity survey and January’s jobs report are just the standouts on the data front. In the midst of all this, the rate-setting FOMC committee will deliver an update on its policy stance.

If economists’ expectations are broadly borne out, the statistics round-up will be relatively flattering. The core price growth rate will inch closer to the 2 percent target, the pace of manufacturing activity growth will quicken, and payrolls will swell by a larger number than in December.

This would fall broadly in line with the trend in US economic data outcomes, which have tended to outperform consensus forecasts in recent weeks. Against such a backdrop, it seems likely that the Fed will stick to a cautiously hawkish message in its policy statement.

At face value, this seems like a healthy recipe for US Dollar gains. The landscape is severely complicated by lingering uncertainty about US fiscal policy however. Indeed, “Trump-watching” has seemingly become an all-consuming activity for the financial markets.

This makes sense. Prickly rhetoric on trade relations, for example – even if it is swiftly walked back – can spook traders and stoke kneejerk volatility that affects the real economy. For its part, the Fed has said that its policy path depends on the impact of the US President’s lofty plans.

The fundamental evidence seemingly points to a steady US economy that is broadly in the same place as the last time Janet Yellen and company sat down for policy meeting. Confirming as much may do little to assuage concerns that this relatively rosy status quo will not be shattered by a sharp pivot on the fiscal side.

With that in mind, the threat posed by headline risk remains acute and the near-term outlook for the US Dollar continues to be clouded. On balance, this makes the currency asymmetrically more responsive to negative versus positive surprises on the news-flow front.

Upbeat data and a gently optimistic Fed may be just enough to counterbalance leery investors’ itch to scale back exposure to the so-called “Trump trade”. Speculative net-long USD bets fell to the lowest in three months last week. A soft patch on the data docket may amplify existing outflow pressure however.