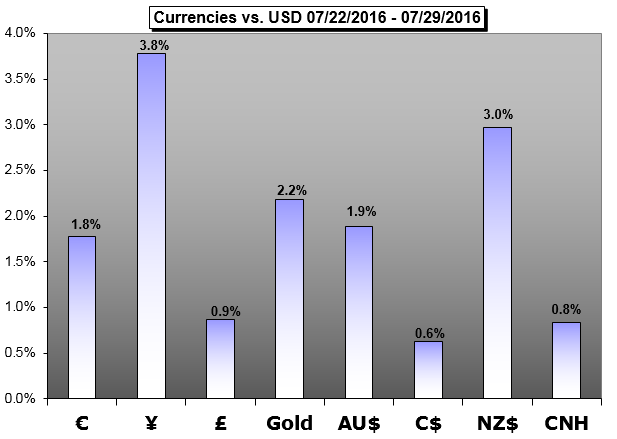 The Dollar and Yen experienced sharp change in trend this past week motivated by event risk. Will these trends find momentum, and will key UK and Australian event risk ahead motivate the same for the Pound and Aussie?

The USDollar dropped every day this past week resulting in a 1.4 percent slide and the longest series of daily losses in 15 months. That said, despite the steady tumble – punctuated by Friday’s sharp drop – the Greenback’s fundamentals still confer it a considerable air of authority.

This time last week, markets were pricing in a rate cut by the European Central Bank this year and for the Federal Reserve to raise rates by June 2017. Now, markets are no longer pricing in an ECB rate cut this year, and the Fed isn’t expected to raise rates until at least January 2018. How quickly market sentiment has changed, and with it, the winds blowing EUR/USD.

USD/JPY may continue to give back the rebound from the June low (98.78) amid waning expectations for a 2016 Fed rate-hike, while the Bank of Japan (BoJ) continues to endorse a wait-and-see approach for monetary policy.

The British Pound finished the week marginally higher versus the US Dollar on the heels of stronger-than-expected economic growth numbers. Yet the small rally keeps the Sterling within a tight trading range, and the true test for the GBP will likely come on a highly-anticipated Bank of England interest rate decision due in the coming week.

The onshore Yuan (USD/CNY) strengthened against the US Dollar for all five trading days this week, rising by +0.76% during that span of time.

Last week we discussed the move-lower in the Australian Dollar after RBA minutes were released from the meeting in earlier July; showing that the bank may be more amenable to cutting rates should data continue to flag signs of weakness in the Australian economy.

The price of USD/CAD fell back toward the Weekly Pivot Support near 1.31/3000 on Friday when Canada released Support Raw Material Prices, but underwhelming May GDP.

Gold prices snapped a two-week losing streak with the previous metal rallying more than 1.7% to trade at 1346 ahead of the New York close on Friday.

Canadian Dollar May Lose Ground Even as the BOC Delivers
Advertisement