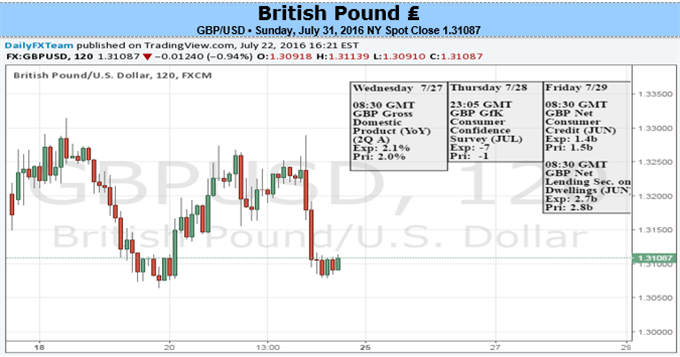 The British Pound finished the week marginally higher versus the US Dollar on the heels of stronger-than-expected economic growth numbers. Yet the small rally keeps the Sterling within a tight trading range, and the true test for the GBP will likely come on a highly-anticipated Bank of England interest rate decision due in the coming week.

The weight of expectations is significant as interest rate markets point to a 100% probability the Bank of England will cut interest rates by 25 basis points at their August 4 meeting. This strong conviction ostensibly eliminates much of the guesswork, but there is nonetheless clear uncertainty given the potential for unconventional monetary policy easing. Bank of England Governor Mark Carney has strongly suggested the bank would look to loosen monetary conditions following the UK electorate’s vote to leave the European Union. How the Bank of England ultimately responds to economic headwinds is of critical importance and will almost certainly act as a key driver for on the British Pound.

Economic data heading into the critical Bank of England meeting paints a decidedly mixed picture. On the one hand, UK Gross Domestic Product numbers for the second quarter handily beat expectations and showed the economy headed into the EU Referendum on solid footing. Yet recent consumer confidence numbers showed the largest single-month drop in headline figures since 1981, and the previous week’s industrial survey figures painted a similarly gloomy picture for domestic producers.

The key question becomes whether the Bank of England will proactively produce monetary policy stimulus or wait until hard data confirms a slowdown. Some claim BoE Governor could take a cue from his European Central Bank counterpart who famously said the ECB would do “whatever it takes” to save the Euro in the midst of the Greek debt crisis. Market reactions to the “whatever it takes” speech were significant—the Euro instantly recovered as did regional financial markets. BoE Governor Mark Carney obviously does not have remit nor clear direct interest in the Euro as the UK has never been part of the single currency zone. And yet any statement to this effect on protecting the British economy from “Brexit” fears would likely force a significant reaction.

Hints at aggressive interest rate cuts and/or similarly substantive Quantitative Easing policies would quite likely hurt the GBP but benefit UK financial markets. The threat of inaction is significant, however; the British Pound would likely rally sharply if no new easing measures are introduced.

Broader price trends favor continued GBP weakness and current trader sentiment remains dour. We need only look at recent CFTC Commitment of Traders data as confirmation; large speculative traders are their most net-short GBP/USD futures in over three years. Yet this in itself creates clear risk as any unexpected news could force a significant short-covering rally. This dynamic likely explains a significant jump in the Sterling on Friday afternoon in otherwise quiet market conditions.

That risk of fear-driven GBP strength is only magnified on truly market-moving news; traders should be wary of the potential for outsized reactions to the upcoming Bank of England policy meeting. - DR