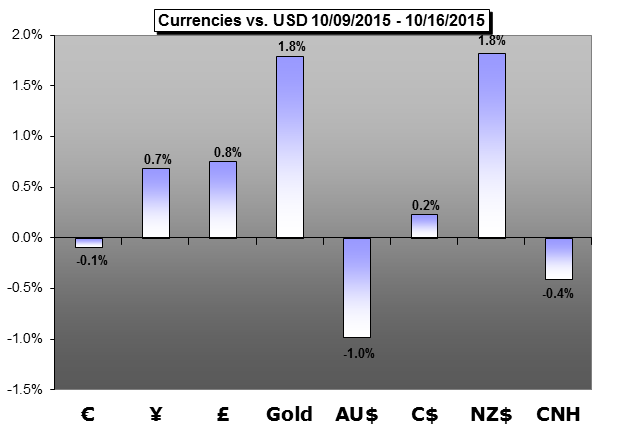 Volatility continues to settle from the extraordinary activity of the previous two months. Confidence is finding a foothold, but will it hold out given the backdrop and key event risk like Chinese 3Q GDP?

The Dow Jones FXCM Dollar Index (ticker = USDollar) suffered a distinctive and bearish technical break of 2015’s carefully contained congestion this past week. Yet, the speculative bait wasn’t taken by the market.

The European Central Bank isn’t too keen on a strong EUR/USD, and in light of recent economic data and financial market developments, may seek to enhance its dovish policy intentions.

Last week the Bank of England struck a cautious tone as global growth concerns raised enough red flags for the Monetary Policy Committee to vote 8-1 in favor of keeping rates flat at .5%.

The key event risks due out next week may heighten the appeal of the Japanese Yen and fuel a further decline in USD/JPY should the developments undermine speculation for a further expansion in the Bank of Japan’s (BoJ) asset-purchase program.

Gold prices are higher for a second consecutive week with the precious metal up 2.33% to trade at 1183 ahead of the New York close on Friday.