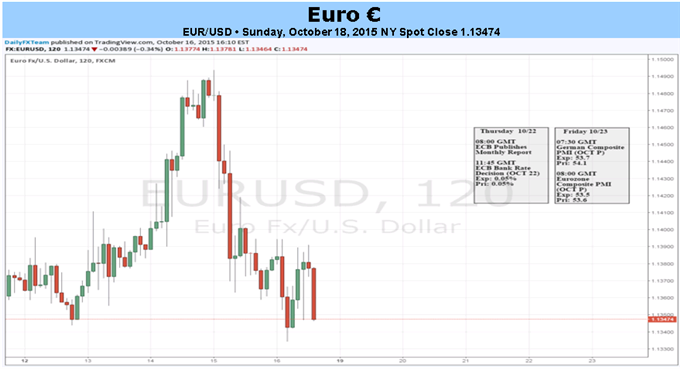 EUR/USD Rallies May Be Capped with ECB Meeting This Week

- The evolution of ECB policy will be the most important theme for the Euro in Q4’15.

The Euro declined versus all but one of its major counterparts last week, led by EUR/NZD (-1.91%) and EUR/GBP (-0.85%). While EUR/USD rates ended mostly unchanged on the week (-0.09%), closing levels don’t tell nearly the whole story: EUR/USD traded as high as $1.1495 on Wednesday, before collapsing into the end of the week.

For the past several weeks – including the most recent one – the prevailing winds in the market originated from the Federal Reserve’s decision to keep rates on hold in September (a decision that now looks like it will be delayed until March 2016). However, by the end of the week, the entire EUR-complex was under pressure as market attention realigned to the upcoming European Central Bank policy meeting on Thursday, October 22.

The upcoming period for EUR/USD (and the Euro more broadly) may be more difficult than what was seemingly a one-way street in October. Indeed, many other EUR-crosses have already started to price in the increasing probability that the ECB will have to enhance its current QE program or unveil new easing measures altogether (EUR/AUD is down by -7.50% since the September FOMC meeting).

The simple fact of the matter is that the ECB is still falling well-short of its main policy initiative, to boost inflation back towards +2% over the medium-term. The latest Euro-Zone Consumer Price Index data showed headline inflation slipped to -0.1% y/y while core inflation was only a meager +0.9% y/y. Inflation expectations remain muted, with the 5-year, 5-year inflation swaps only at 1.695% (although with oil prices rising the past few weeks, this is a marked improvement from yearly low set on September 30 at 1.560%.

For now, markets seem content in pricing in the ECB maintaining its dovish policy stance for a significant period of time, especially since the September ECB meeting when the Governing Council downgraded its growth and inflation forecasts for the next several years. Morgan Stanley’s “Months to First Rate Hike Index,” which provides a numerical representation of when the central bank would raise rates from present day, currently registers July 2018 as when the ECB will move away from its NIRP/ZIRP policies. In early-September, the index was forecasting February 2018 as when the ECB would make its rate move. Over the course of five weeks, markets have priced in an additional five months of easy monetary policy from the ECB. German bund yields are negative out to 5-years (-0.038%), reflecting the sentiment that rates will remain low for the next several years.

Reflexively, any prolonged period of EUR/USD strength going forward probably raises the probability that the ECB will ease in the coming months, as a stronger trade-weighted Euro will only hurt exporters and dampen inflation. The CFTC’s most recent COT report showed that speculators held 80.6K net-short contracts at the end of the week of October 13, 2015, meaning there is some more room for positioning to build if the ECB signals its intention to ease in the future. Positioning is not in the way of a further short build-up:traders were much more short in August (115.2K contracts) and in March (226.6K contracts). –CV