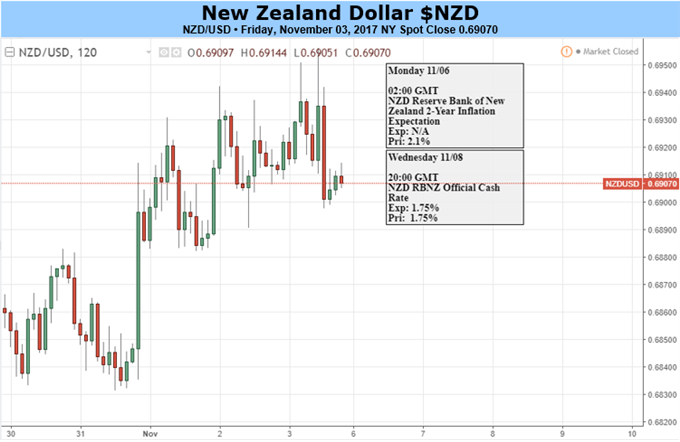 The New Zealand Dollar spent much of this week clawing back losses that had very much dominated the currency’s price action over the past few weeks. Bigger picture, we can really draw back to July to focus in on when the pain really started to show for the Kiwi. This is when NZD/USD was trading over the psychological level of .7500, and this came on the heels of an aggressive rally that took two-and-a-half months to build-in over 700 pips on the pair. But in the three months since, the entirety of those gains have been eradicated. This bearish move in the New Zealand Dollar saw another fresh wave of selling on last month’s news around New Zealand elections, and after catching a bounce at the 2017 low last week, prices spent most of this week trudging-higher.

NZD/USD Daily: Corrective Gains for the Kiwi After Last Week’s Bounce at 2017 Low 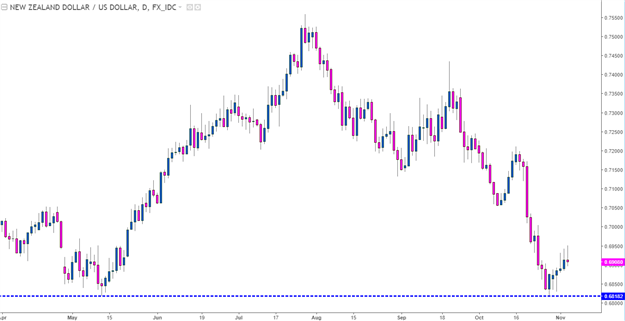 After newly-installed Prime Minister Jacinda Ardern’s Labour party crafted a coalition with the NZ First Parties, a blip of strength had temporarily showed-up in the Kiwi spot rate. This was very much driven by the prospect of an increase in the minimum wage; with the hope being that higher wages as brought upon by legislation could force stronger rates of inflation which, eventually, can put the Reserve Bank of New Zealand in a spot where they have to hike rates. But – that strength was short-lived, as Ms. Ardern is also promoting a modification to the Reserve Bank Act, and this can radically change the way that the RBNZ does business.

The proposed change would make the RBNZ also accountable for full-employment. This would be the incorporation of an additional mandate, on top of the RBNZ’s current focus of inflation. The change would effectively put the RBNZ in a spot where they have to try to balance the forces of inflation and employment, similar to the Federal Reserve utilizing a dual mandate versus the single mandate of Central Banks like the ECB. This is also happening while lawmakers consider an additional committee to manage the cash rate, and this invites a whole host of uncertainty around the future of the Kiwi-Dollar spot rate, along with that of the RBNZ itself.

On top of all of that potential change, next week sees Interim RBNZ Governor Grant Spencer conduct his first full monetary policy statement, and this also happens to be the first RBNZ rate decision under the new Labour-led government. There are no expectations for any moves on rates, and for the next expected adjustment, markets are currently looking out to Q4 of 2018 for a potential hike. The one possible area for change at next week’s rate decision is an adjustment to inflation expectations in order to account for the weaker currency. In Graeme Wheeler’s final press conference as the head of the bank in August, the RBNZ said that they anticipate rates staying on hold until at least September of 2019. Since then, we’ve seen inflation come-in at 1.9% versus the RBNZ’s projection of 1.6%, and the additional slide in NZD will likely necessitate a small adjustment for forward-looking inflation figures.

While stronger rates of inflation could eventually drive rates-higher, the prospect of change within the Reserve Bank Act will likely continue to dampen demand for NZD, at least in the near-term, as the rest of the world becomes more familiar with what a Jacinda Ardern-led New Zealand will end up looking like. The one thing that does appear certain is that Ms. Ardern is not satisfied with business as usual, and this can lead to further change. Markets, generally speaking, abhor change as this presents risk; and while the potential around those changes remain uncertain, we will likely see some element of risk aversion until market participants can gain more clarity. The forecast for next week will be set to bearish on the New Zealand Dollar.