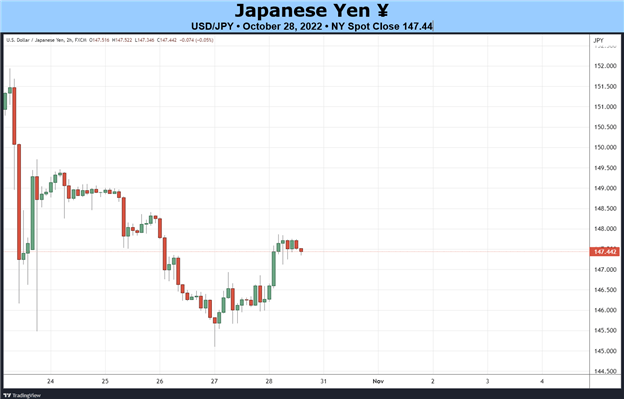 Buffeted by another intervention at the onset of trading last week, the Japanese Yen was able to secure a positive finish versus the US Dollar, supported by a retracement in US Treasury yields. USD/JPY rates fell back by -0.14%; the pair oscillated between a +1.4% gain and a -1.72% loss.

Yen weakness was flush everywhere else, though. Unlike the September intervention by the Japanese Ministry of Finance, the combined efforts between October 21 and October 24 did little to turn the tide for the Japanese Yen against most of its major peers. GBP/JPY rates surged by +2.72% as new UK Prime Minister Rishi Sunak took power; EUR/JPY rates gained +0.89% as the European Central Bank hiked rates by 75-bps; and CAD/JPY rates still clawed out a +0.19% gain even though the Bank of Canada disappointed market expectations by delivering a 50-bps rate hike.

The turn lower, if only briefly in USD/JPY rates, highlights the significant obstacles the Japanese Yen still faces. If anything, it remains the case that the Ministry of Finance’s efforts are a clear sign that the Bank of Japan won’t be relenting anytime soon, as discussed in the late-September Japanese Yen weekly fundamental forecast, which the Bank of Japan confirmed this week at its October policy meeting.

The fact remains: with all other major central banks raising rates to combat inflation while the Bank of Japan continues to pursue its QQE with yield curve control policy, the interest rate gap between the Yen and other major currencies will persist. As such, the Ministry of Finance’s intervention efforts will be akin to Sisyphus pushing his boulder uphill. 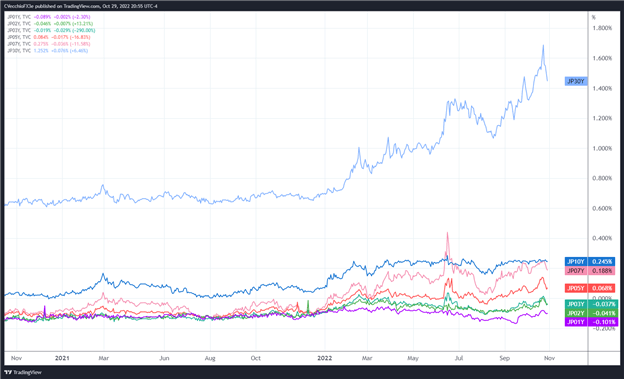 The Bank of Japan has made clear that it will continue efforts to keep Japanese government bond yields capped. Accordingly, this remains the prime reason for why it is hard to believe that the Ministry of Finance’s efforts to support the Yen will succeed beyond a short-term timeframe. The singular way to increase the likelihood of a sustained reversal in the Japanese Yen is if the Bank of Japan ends its QQE with yield curve control policy, which does not seem likely any time soon. 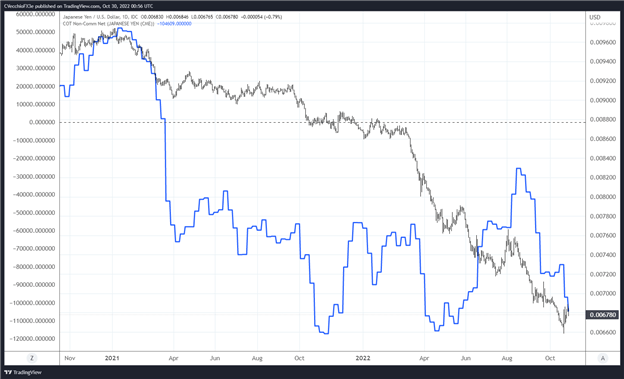 Finally, looking at positioning, according to the CFTC’s COT for the week ended October 25, speculators slightly decreased their net-shortJapanese Yen positions to 104,609 contracts from 96,944 contracts. Japanese Yen positioning is now the most net-short since mid-May 2022, a sign that traders don’t think that recent intervention efforts are likely to be significant enough to alter the longer-term trend of weakness.