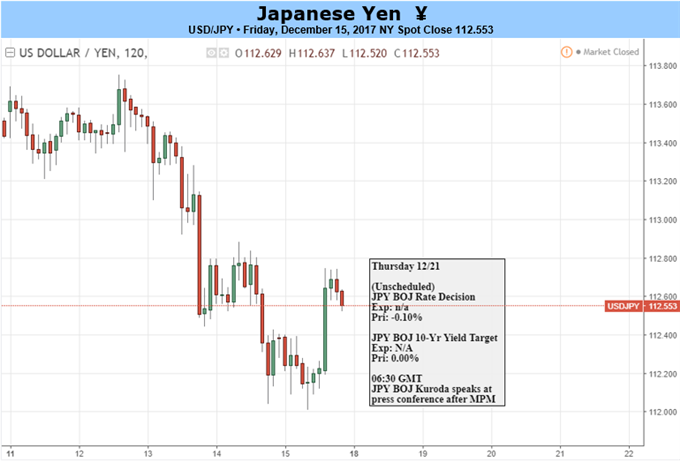 Next week brings the final Bank of Japan rate decision for 2017. It’s been a rather quiet year for the BoJ, all factors considered; and quite the respite from the past few years when their very own policies were very much in the spotlight. Last year saw the stealth move to negative rates in January, catching many by surprise and leading to a troubling five-month period that saw USD/JPY drop all the way from above 121.50 to below 100.00. The oncoming ‘reflation trade’ that started around the U.S. Presidential Election in November pushed prices back towards that 120.00 level, falling just short as a double-top was set at 118.67 in December/January. After a pullback in the first quarter of the year, USD/JPY sank into a range that’s lasted ever since, now going on for seven full months. 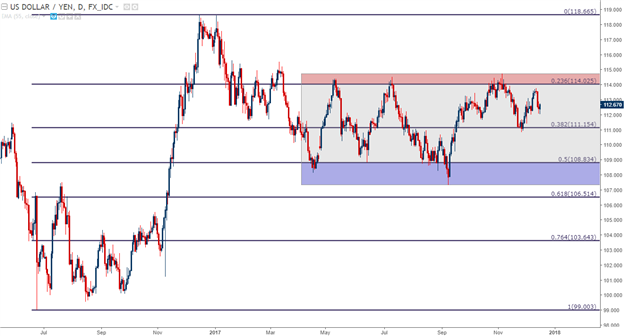 The big item of pertinence circling around the Bank of Japan, and likely to be on full display next week is the bank’s outlook towards stimulus. The stimulus program that came into markets around the election of Prime Minister Shinzo Abe has continued to drive into Japanese markets going on five years now. And while inflation initially showed a promising response, eclipsing the BoJ’s 2% target temporarily in 2014; those hopes have fizzled in the years since as the Japanese economy has moved back towards the deflationary cycle that defined the economy for much of the past thirty years.

For the past year, inflation has remained between .2 and .7% in Japan, and this is with an outsized stimulus program in effect. After four consecutive months at .4% this summer, a quick visit to .7% in August and September led into a drop back-down to .2% in October. So, it would appear that we remain very, very far away from attaining the BoJ’s goal, with little hope in the immediate sights.

In September, we started to hear machinations around a potential increase in stimulus. This is when incoming BoJ member, Gouishi Kataoka, dissented at the BoJ’s rate decision. Dissent within the BoJ isn’t necessarily new, as we regularly heard prior board members Takahide Kuichi and Takehiro Sato dissent at meetings in the past. But their dissent was largely looking for an end to stimulus, or at least less of it; and the thought was that we’d seen more unanimity when their terms ended in July of this year. But, with Mr. Kataoka coming into the BoJ in July, the dissent continued, and this time in the opposite direction as the proposition was to see even more stimulus in the effort of driving the Japanese economy towards the 2% inflation target.

This theme saw a twist last month. BoJ Governor Haruhiko Kuroda mentioned the ‘reversal rate’ in a speech, and questions began to populate as to whether the head of the BoJ was dropping hints towards an eventual stimulus exit. Reversal rate is the rate at which rate cuts become detrimental for an economy, and given how loose policy has been for so long in Japan, this could be denoting a higher bar for future stimulus endeavors. This was initially interpreted as Gov. Kuroda noting that additional rate cuts may actually do damage to the Japanese economy, and this put market participants on high alert for a potential announcement moving the bank away from their gargantuan stimulus program in the coming months. But – in a clarification after the fact, we learned that ‘reversal rate’ entered the conversation at the prompting of Mr. Kataoka, in order to flag risks around additional easing; and now it seems as though this inclusion of the term ‘reversal rate’ is actually in order to lay the groundwork for even more stimulus in the future.

The BoJ appears committed here, and given the Japanese economy’s continued struggle to attain the elusive 2% inflation target, it would appear as though we’re nowhere near the conversation of stimulus exit.

The forecast for the Japanese Yen will be set to bearish through the end of 2017.