Weekly Performance: GBP/USD had gotten off to a strong start to the week following a breakthrough on the vaccine front with Pfizer announcing positive results. However, the move above 1.33 had been short-lived with yet another soft Brexit deadline set to be missed as both UK and EU negotiating teams reiterated that significant differences remain on key areas, namely fisheries and level playing field. That said, with talks resuming in Brussels next week, GBP will remain on Brexit watch.

PM Adviser Departure aids GBP: In a week of political power struggles at No. 10, news broke out that Dominic Cummings, who was among the key influential figures behind the vote to leave campaign in the EU referendum, has handed in his resignation. The market interpretation appears to be one of reduced Brexit risks with the PM perhaps able to provide compromises in order to reach a deal without the pushback from more anti-EU advisers. In turn, GBP has been among the better performers against its counterparts to close out the week.

No-Deal Brexit Risks are Being Priced Out: Using a ratio of the CBOE Brexit 50 Low and CBOE Brexit 50 High indices, markets appear to be pricing in a lower premium for Brexit risks, a factor that has helped push EUR/GBP lower. With a rejection of the 0.90 handle, focus is back towards 0.8910-20, in which a break below opens up a move towards 0.8850-60.

No Deal Brexit Indicator vs EUR/GBP 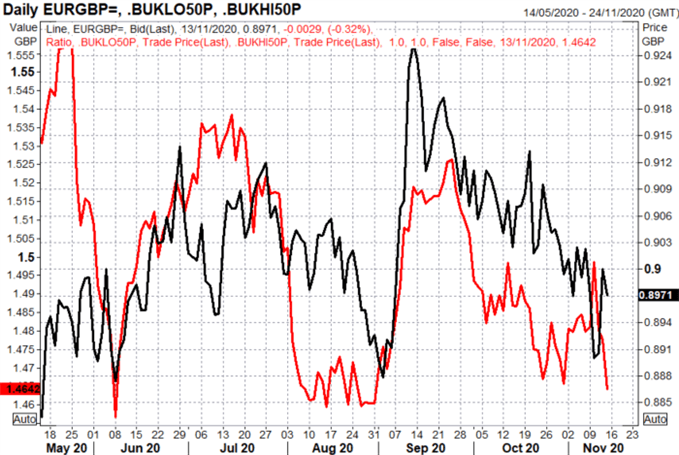 GBP/NZD: Once again the 200WMA has remained firm with the cross failing to holding below. While a less dovish RBNZ has prompted a strong NZD as rates markets price out the OCR going negative next year, the most looks to be somewhat overdone. Therefore with an EU-UK trade deal more likely than not in my view, GBP/NZD has upside potential towards 1.96. 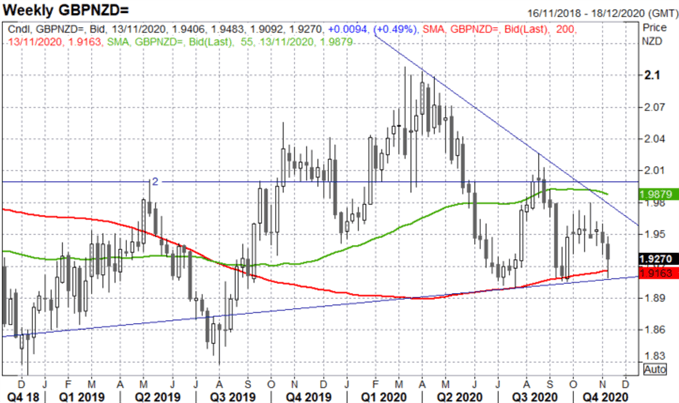 US Dollar Roars to New Highs Since 2002 in a Crushing Winning Streak, Where to?
Advertisement