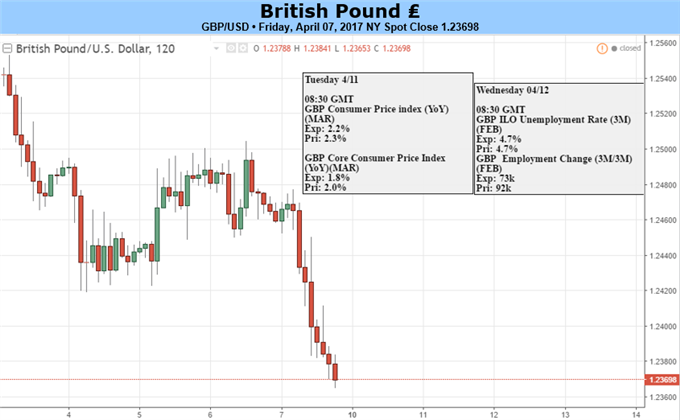 •GBP/USD: Fret Not, a Resolution is at Hand- Critical Support 1.23

The broader outlook for GBP/USD remains tilted to the downside amid the deviating paths for monetary policy, and the British Pound may struggle to preserve the advance from March as the economic docket is anticipated to show a downtick in U.K. price & wage growth.

Despite the mixed market reaction to the U.S. Non-Farm Payrolls (NFP) report, GBP/USD stands at risk of facing further losses as the headline and core U.K. Consumer Price Index (CPI) are expected to narrow in March, while Average Hourly Earnings are projected to slow to an annualized 2.1% from 2.2% in January. Even though the Bank of England (BoE) warns ‘there are limits to the extent that above-target inflation can be tolerated,’ signs of easing inflation may encourage the central bank to retain the current policy at the next meeting on May 11, and Governor Mark Carney and Co. may boost their efforts to buy more time as ‘Brexit’ clouds the long-term outlook for growth and inflation. With that said, the Monetary Policy Committee (MPC) may continue to tame interest-rate expectations for the foreseeable future as officials warn ‘monetary policy can respond, in either direction,’ and GBP/USD may continue to track the downward trend carried over from late-2016 as the Federal Reserve appears to be on course to implement additional rate-hikes in 2017.

Fed Fund Futures are now highlighting a greater than 60% probability for a June rate-hike as the FOMC Minutes showed a growing discussion to adjust the balance sheet later this year, and the data prints on tap for the week ahead may put increased pressure on the committee to raise the benchmark interest rate sooner rather than later as the core U.S. Consumer Price Index (CPI) is anticipated to rise an annualized 2.3% following a 2.2% expansion in February. Even though the FOMC argues ‘recent increases in consumer energy prices could cause inflation to temporarily reach or even rise a bit above 2 percent in the near term,’ a pickup in underlying price growth may push the committee to adopt a more hawkish tone at the next meeting on May 3, and the dollar may continue to benefit from the deviating paths for monetary policy as Fed officials continue to forecast three to four rate-hikes for 2017. With that said, market participants may put increased emphasis on the fresh rhetoric coming out of the FOMC with Chair Janet Yellen scheduled speak next week, and the greenback may stage a larger advance over the days ahead should the central bank head show a greater willingness to implement higher borrowing-costs over the coming months. 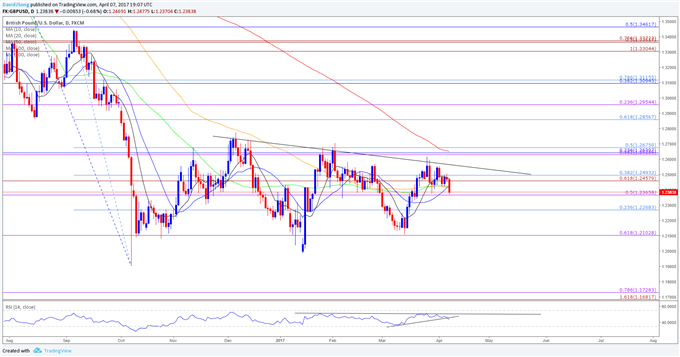 The failed attempt to test the Fibonacci overlap around 1.2630 (38.2% expansion) to 1.2680 (50% retracement) keeps the broader outlook for GBP/USD tilted to the downside, with the pair at risk of facing further losses as it comes off of trendline support. Indeed, the Relative Strength Index (RSI) appears to be highlight a similar dynamic as it breaks the bullish formation carried over from the previous month, with a break/close below 1.2370 (50% expansion) opens up the next downside region of interest around 1.2270 (23.6% retracement) followed by 1.2100 (61.8% expansion). - DS