The Euro gained cautiously against its major counterparts this past week on a very close US presidential election race. Most of its strength was against haven-linked currencies like the US Dollar and similarly-behaving Japanese Yen. Where it suffered was against growth-oriented ones like the New Zealand Dollar and Australian Dollar. The latter two appreciated alongside the Dow Jones, S&P 500 and Nasdaq Composite.

Global market sentiment improved as Democratic nominee Joe Biden pulled ahead against incumbent Donald Trump as it became slowly more certain who could take charge of the White House. On Friday, Mr Biden overtook Trump in key swing states Georgia and Pennsylvania. Though unconfirmed, this would set him on course to take the presidency. However, market mood tapered as Trump filed lawsuits on election results.

Recommended by Daniel Dubrovsky
What is the road ahead for the Euro this quarter?
Get My Guide

Still, it seems that the country is heading for a divided government. Due to a runoff in Georgia, the composition of the Senate likely won’t be known until at least early January. That could mean smaller-than-expected fiscal aid. Senate majority leader Mitch McConnell, referencing October’s rosy jobs report, said that the data ought to affect the size of any additional stimulus package. This could come back to haunt financial markets.

Data next week like German ZEW sentiment and third-quarter Eurozone GDP may do little to drive near-term ECB policy expectations. What will be more interesting to watch is how the European Union approaches the November 10th target date for imposing WTO-approved $4 billion retaliatory tariffs against the US over local aid to Boeing Co. This is part of a 16-year old dispute which Trump has threatened to strike back if imposed.

If the EU imposes tariffs, that may dent sentiment, sinking EUR/USD, EUR/JPY as EUR/AUD and EUR/NZD rise. But, with Joe Biden on course to take the White House, shifting the nation’s foreign policy approach, the road ahead seems a bit muddy for now. ECB President Christine Lagarde, Fed Chair Jerome Powell and BoE’s Andrew Bailey may underscore the need for lose policy at the former’s forum, improving sentiment. 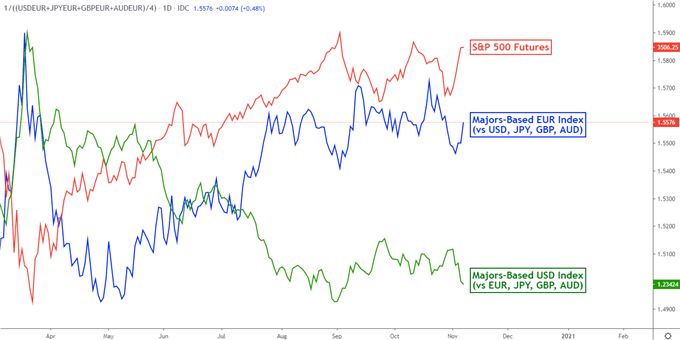