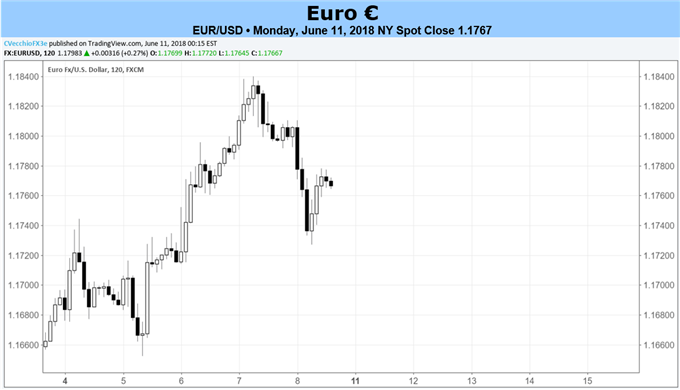 - The Euro rallied to the top spot among the major currencies after rumors emerged that the ECB would use its June policy meeting to make a tweak to its QE program.

- At a minimum, it would seem that the ECB will pave the runway for an announcement about its QE program in July, that way it can make the change in September to ensure a smooth step down in the taper.

- The IG Client Sentiment Index continues to suggest a mixed outlook for EUR/USD as price continues its rebound.

Despite a weak close on Friday, the Euro emerged as the top performing currency last week buoyed by rumors of a potential change to the European Central Bank’s QE policy at its upcoming June meeting. Concurrently, political tension around the Euro dropped as the new populist Italian government appeared to soothe concerns about its budgetary plans. EUR/JPY and EUR/USD were the top performing pairs, up by +0.94% and +0.93%, respectively, while EUR/NZD was laggard, up by a meager +0.20%.

With the ECB’s June meeting scheduled for this coming Thursday, the Euro’s rumor-driven rebound faces a make-or-break moment. With the latest inflation readings having exhibited a surprising rebound in price pressures – the preliminary May Eurozone CPI reading came in at +1.9% y/y and is expected to remain there at the final release this Friday – signs are pointing to the ECB’s Governing Council making an announcement with respect to their QE program (as rumors would have it).

Logically, if the ECB’s QE program is set to run at a pace of €30 billion per month into September, then an announcement would need to be made before the current end date if the QE program is to continue. After the meeting this week, there are only two meetings left – July and September – before the QE program runs its course.

Accordingly, if the ECB under President Mario Draghi is following its usual playbook, it will use the June meeting and the new set of Staff Economic Projections to serve as the foundation for an announcement by the meeting in July about their intention to run the QE program at a taper pace of either €10 or €15 billion per month for three months through December, and the technical details of the new pace being released in September.

Ultimately, the ECB meeting this week simply serves as an appetizer to a forthcoming change. The forward guidance aspect of the ECB policy will prove to be the most important factor when all is said and done, as the majority of market participants at this point in time aren’t expecting the ECB to cull their QE program cold turkey in September when the current leg winds down. Along these lines, because a rate hike by the ECB is still at least a year away, traders may walk away from Thursday’s meeting disappointed, and the Euro rebound may soon fizzle.

Finally, as we’ve pointed out in recent weeks, positioning is no longer the significant factor it was earlier this year – really, less than two months ago. Speculators held +89.2K net-long Euro contracts through the week ended June 5, a -41% decline from the all-time high set during the week ended April 17 (+151.5K contracts). A major move by the Euro predicated on a saturated market position is unlikely in the short-term.