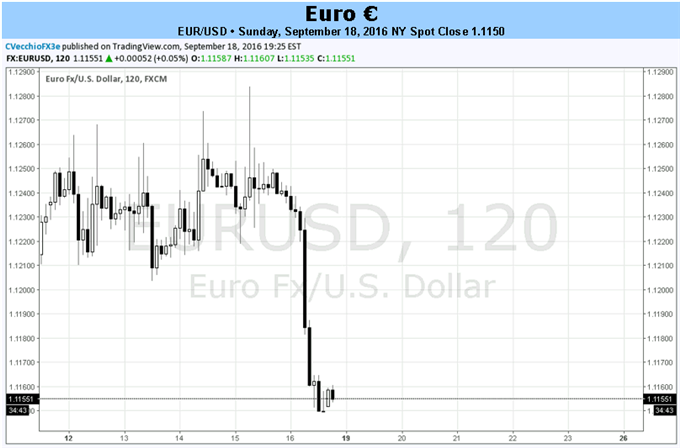 - Two-way action in EUR/JPY, EUR/USD very possible this week thanks to BOJ and FOMC.

A second tough week in a row for global equity markets after the summer volatility slumber, and the Euro continues to act like a safe haven dealing with rising central bank stimulus odds. With the Japanese Yen and US Dollar leading the way, the Euro found itself outpacing the riskier commodity currencies and the British Pound, as Brexit headlines moved back to the forefront. Overall, though, there was little by way of meaningful economic data or information that has shifted the Euro’s or EUR/USD expected direction – more sideways trading – over the past week.

There aren’t many meaningful Euro-Zone data due out over the coming days either, so traders’ collective attention shouldn’t be trained on the economic calendar. Instead, EUR-crosses are likely to prove highly volatile throughout the week thanks to central bank interference: there are five ECB speakers between Monday and Friday; and the Federal Reserve and Bank of Japan both meet from September 20-21.

Among the ECB speakers due out over the coming days, President Mario Draghi’s remarks on Thursday should carry the most weight. If you recall, at the September ECB policy meeting, ECB President Draghi made clear that the effectiveness of the QE program may be challenged given the constraints the capital key now poses. “We tasked the relevant committees to work on the smooth implementation and the changes that are needed to ensure the smooth implementation,” he said. In other words, the ECB is not focused on the size of the QE program right now, but rather, whether or not it’s functioning properly.

If a shift in ECB policy is coming soon, President Draghi is the person to convince markets of its forthcoming nature. While we don’t expect the ECB to do anything substantial before the next round of SEPs are released at the December meeting, we do expect to hear greater discussion regarding the finer points of the QE program. Ultimately, the ECB will have to choose to remove the -0.40% deposit rate threshold for conducting bond purchases (as it’s running out of eligible German debt) or to remove the capital key ratio purchasing parameters (thereby allowing the ECB to purchase more peripheral debt).

Otherwise, for the Euro, there’s not many positive developments occurring right now. Economic data has continued to deteriorate relative to analysts’ expectations, as measured by the Citi Economic Surprise Index. The Euro-Zone CESI fell to -21.7 at the end of the week from as high as +31.8 on August 3. Market measures of inflation remained subdued as well, despite their short-term rebounds. The 5-year, 5-year inflation swap forwards, a measure of medium-term inflation (and one of ECB President Draghi’s preferred gauges) closed last week at 1.328%, slightly higher from 1.314% on August 19. Measured back three-months and it’s clear that inflation expectations are in a rut: on June 17, the market was pricing 1.357%.

While the outlook for the week ahead may otherwise be bearish for the Euro, in context of it serving as a safe haven and low-yielding funding currency, exogenous forces may light a spark under volatility this week. While a relatively dovish BOJ and a relatively dovish Fed may cater to a stronger EUR/JPY and EUR/USD, such signaling would likely mean risk appetite was improving, reducing the demand for the Euro elsewhere.

On the other end of the spectrum would be a relatively hawkish BOJ and a relatively hawkish Fed, and they may cater to weaker EUR/JPY and EUR/USD trades mid-week. Yet capital flows are key: if the BOJ and Fed take stances that lead to EUR/JPY and EUR/USD falling, it probably means that risk appetite will be reduced, and the Euro could gain against the commodity currencies.

In either case, regardless of what the BOJ and the Fed do after their respective September 20-21 meetings, don’t look for all EUR-crosses to move in the same direction: capital flows resulting from shifts in risk sentiment will prove to be the most important factor over the week. –CV