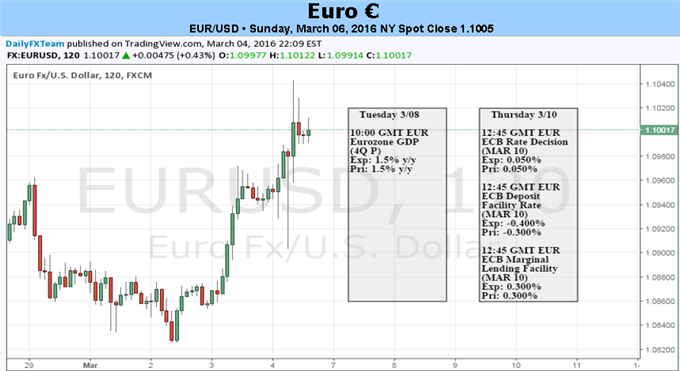 - EUR/USD was able to rally despite a strong headline February NFP figure.

After a rough February, the Euro settled during the first week of March, as market participants prepared for what should be a defining moment in the negative interest rate policy (NIRP) era: will the European Central Banks lower rates further into negative territory as otherwise conventional policy tools prove ineffective? Certainly, over the past three- to four-weeks, as the Euro has receded, risk assets (particularly commodities and equity markets) have rebounded amid hopes that the ECB will introduce new easing measures on March 10, and that the Federal Reserve will keep rates unchanged on March 16 – thereby derailing its forecast for four rate hikes this year in a more dovish direction.

While ECB and Fed policy is moving in opposite directions at current time, both face the same issue, an issue that central banks are facing globally: they are running out of policy tools thanks to years of restrictive fiscal policy, leaving central banks as the only game left in town (save Canada – and just look at how the Canadian Dollar has performed since the Bank of Canada’s January meeting). For the ECB this week, it is desperately in the need to surprise short-term traders and longer-term investors alike.

In some regards, the market has effectively priced in the first half of expected easing from the ECB: a cut to the deposit rate. This may have been priced in starting right after the January ECB meeting, when President Mario Draghi suggested that the central bank would reassess its policy in March. So, if a deposit rate cut is coming on Thursday, the market has already priced it in: 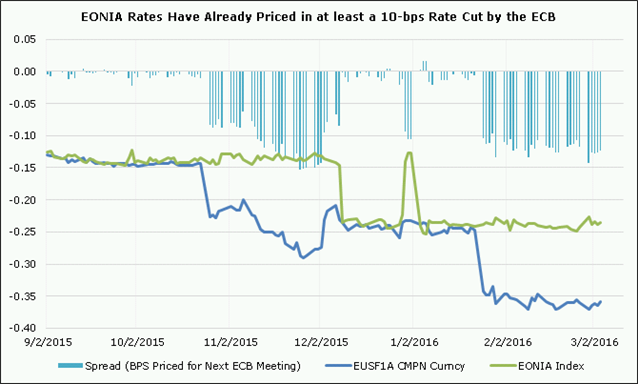 The 10-bps rate cut that’s currently being priced into markets is increasingly looking like the only major policy change that should be expected. Sure, there may be some improvements on the margins – another six-month extension to the QE program or a variation on the collateral eligible under the purchase program – but it’s unlikely that we’ll see an increase in the run rate of the program beyond €10 billion, if at all (currently €60 billion per month). Additional steps like a tiered deposit system or a new asset purchase program seems like too big a hurdle to clear given the political discord wracking Europe currently, but would certainly constitute a surprise - and therefore a new, not-yet-priced dovish influence for the Euro.

Another factor to consider is that the EUR/USD exchange rate has depreciated so quickly over the past three- to four-weeks. It’s worth noting that EUR/USD closed as high as +3.87% higher the week of our report, “Further Euro Strength Suspect as Data Deteriorates; ECB Very Likely to Act,” and at the closing rate of $1.1005, EUR/USD closed last week just +0.96% above the ECB’s 2016 technical assumption for EUR/USD ($1.0900). The ECB needs to surprise market participants – unveil a new monetary policy bazooka – if it’s going to prevent another kick up in Euro rates.

There is one factor limiting the Euro’s potential to the topside should the ECB disappoint: market positioning. As of the week of March 1, there were 68.5K net-short contracts held by speculators in the futures market. The week of the ECB’s December 2015 meeting, there were 182.9K net-short contracts held. Put simply, the fuel for a short covering rally is there, but the fuel for such a move is a lot more limited than it was in December.

If we’re in the middle of a late-November/early-December déjà vu, then sideways trading this week followed by another Euro rally after the ECB meeting seems like the course of action. This could very well be a “buy the rumor, sell the news” situation. Though, in the event that the Euro rallies, traders may not want to get too comfortable: the Fed’s March 16 meeting is around the corner; and the eventuality of the ‘Brexit’ referendum poses a greater threat to the existence of the European Union – and thus the Euro – than it will to the UK over the long term. –CV