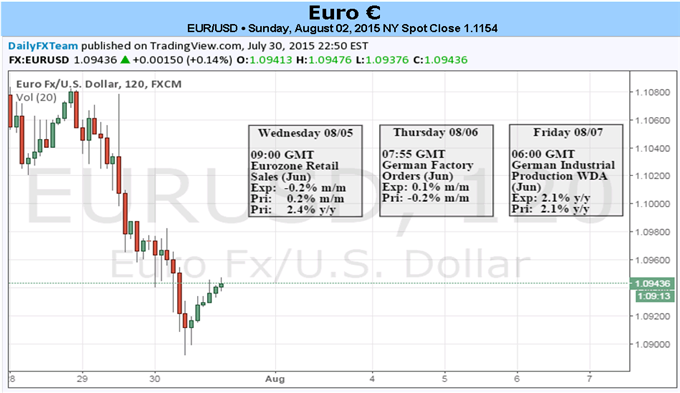 - EURUSD took a spill post-FOMC, and the USDOLLAR Index has remained in its consolidation state ever since.

- Speculation around the timing of the Fed’s first rate hike is proving to be a persistent, significant catalyst for EURUSD.

Despite all of the intraweek volatility, when the chips settled, the Euro ended the week lower against most of its major counterparts. Depreciating by just under one-half of one percent against the US Dollar, EURUSD saw price oscillate between $1.0892 and $1.1128 amid a flurry of headlines around Greece, whether or not the Federal Reserve would raise rates in September 2015, and further signs of volatility in Chinese financial markets.

While each of these factors may have played some part in getting EURUSD to trade back under $1.1000 by week’s close, it’s evident that the market right now is highly sensitive to specuatlion unfolding around the timing of the Fed’s first rate hike more than anything. Ahead of the Fed last week, markets were pricing in January 2016 as the most likely period for the first rate hike. After the Fed, markets began aggressively pricing in December and even October 2015 as the most likely periods.

Traders saw just how tightly wound the market is right now with respect to the Fed raising rates, given the reaction in EURUSD to a typically-low level economic report – the US Employment Cost Index on Friday. With Fed officials saying that, despite low levels inflation, hopes for sustained higher consumption on the back of rising wages should pave the way for action later this year. As the US ECI showed the slowed wage growth since 1982, markets quickly took it was a sign that the Fed’s prognosis was misguided: per the fed funds futures contracts derived implied probabilities, there was a 48% chance of a rate hike in September ahead of the US ECI release; afterwards the probability dropped to 40%. Around the data, EURUSD jumped over 1% before fading back throughout the day on Friday.

Friday’s violent topside price action in EURUSD is indicative of a market that has too many chips on the table: the market was too aggressive in pulling forward expectations of a Fed rate hike; and there were still too many traders short Euro in the market. Indeed, per the CFTC’s COT report, there were still 104.0K net-short Euro positions held by speculators for the week ended July 28, 2015; likewise, FXCM’s SSI has indicated that the retail crowd has been net-short EURUSD since the end of March. Both of these conditions may have fed into the short covering move amid unwinding rate hike expectations on Friday.

With several significant Euro-Zone and US economic data release due over the coming days – the calendar is quite saturated with central bank activity between Tuesday and Thursday, and the July US Nonfarm Payrolls report will be released on Friday – it’s very likely that the coming five days bring about the same burst of volatility that the past week wrought. –CV