Weakest Wage Growth Since 1982 Shocks USD Out of Intraday Rally

- US Employment Cost Index (ECI) decelerates to slowest pace since 1982.

For all the optimism and hawkishness about the US economy and the Federal Reserve that was stirred up this week, data released today has provoked traders into an abrupt about face in recent US Dollar long positions. The US Employment Cost Index (ECI), not typically a market mover but rather a peripheral data point that only more serious fundamental-leaning traders watch, proved to be a seismic powder keg. Wage growth in the US – something Fed policymakers have said they expect to increase and are watching to increase before rates are raised – just plummeted to its weakest pace of growth since 1982.

Given how the market was primed ahead of the data – a range in the USDOLLAR Index holding amid end-of-month rebalancing flows – seeing a weak print take its toll on the greenback might not be that surprising. However, in context of what we’ve learned this week, there is a bit more innuendo than otherwise might appear on the surface.

Ahead of the Fed this week, markets were pricing in January 2016 as the most likely period for the first rate hike. After the Fed, markets began aggressively pricing in December and even October 2015 as the most likely periods. Per the fed funds futures contracts derived implied probabilities, there was a 48% chance of a rate hike in September ahead of the US ECI release; afterwards the probability dropped to 40%. Evidently, markets are discounting the optimism and hawkishness this week rather quickly, proving to be a major weight on the US Dollar this morning.

Considering the importance of the ECI relative to other upcoming data prints, namely the US ISM Manufacturing and Services reports and the US Nonfarm Payrolls report, the holding power of the wage data over the US Dollar will probably be short. When viewed from the yearly perspective (opposed to the quarterly benchmarking reported in the headline), wage growth in the US is still up +2% - nothing impressive by any means, but around the same rates seen the past two years. 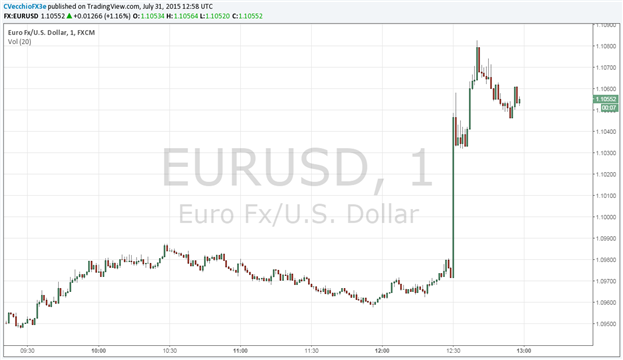