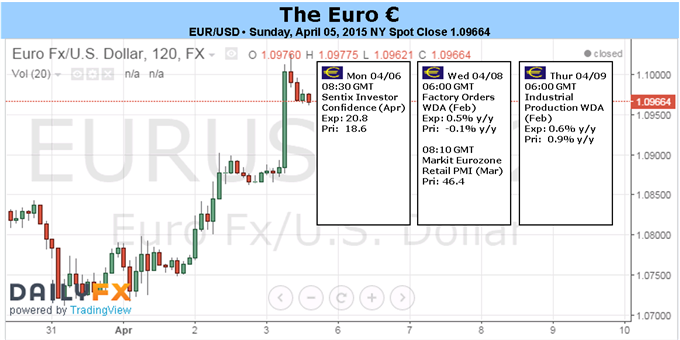 - April has typically been a poor month for the US Dollar, which in turn may benefit EURUSD amid stretched positioning.

- EURUSD surged higher on Friday in illiquid conditions after a dismal March US Nonfarm Payrolls report.

The Euro steadied at the start of April and Q2, posting gains against five of its seven major counterparts, mainly due to concerns about growth and inflation proliferating abroad. EURAUD climbed +2.25% and EURUSD closed up by +0.73%, as speculation about a new wave of dovish policy leanings from the Reserve Bank of Australia and the Federal Reserve dominated investor sentiment. With respect to the latter, there has been a noteworthy increase in volatility the past several days thanks to weak US jobs data and heightened concern about Greece’s ability to pay its upcoming loan reimbursement, with EURUSD trading above $1.1000 and below $1.0750 over the course of the past week.

With respect to Greece, there is a €458 million payment due to the IMF on April 9, as well as an €80 million interest payment due to the ECB on April 20. Concerns about Greece running out of cash are elevated, even as reports circulate that the national government will be able to raise the cash by borrowing from local governments. Liquidity concerns have made themselves abundantly clear in debt markets, where the Greek 3Y yield is nearly double the Greek 10Y yield, at 23.865% and 12.062%, respectively. In normal times, investors should receive higher compensation for holding debt over a longer period; evidently the market is worried about Greece’s ability to make good on its financial obligations in the near-future.

Should Greece dodge yet another bullet and write the next chapter in ‘kick the can down the road,’ focus for EURUSD could immediately swing back to the economic data environment in the Euro-Zone relative to the US – a gap that is certainly closing. The Citi Economic Surprise Index for the Euro-Zone rose to +63.0 at the end of the past week, up from +52.1 from a week earlier. Euro-Zone data has been outpacing US data at its best clip in nearly four and a half years, and looks much better in context of Friday’s March US labor market report.

As markets have stabilized their estimate for ECB policy (Morgan Stanley’s ‘months to first rate hike’ index (MSM1KEEU) resides at 44.9, suggesting a December 2018 or January 2019 rate hike), they’ve started to price out the possibility of the Fed raising rates in 2015 altogether. The implied probability derived from the federal funds futures contract suggests that the Fed will keep its main rate at 0.25% or lower in December 2015, with January 2016 being the most likely period for the first rate move.

If investors are repricing the Fed’s rate hike timeline, then there is amble tinder to fuel a EURUSD short covering rally, especially in context of Greece not going under. The number of net-short contracts held by futures markets speculators rose to a new all-time high for the week ended March 31, to 226.6K contracts, eclipsing the previous all-time high set a week earlier at 221.0K contracts. Similarly, per FXCM’s execution desk data, the retail crowd is holding short EURUSD positions at a clip of over 2:1 over long positions (SSI ratio at -2.08), suggesting that the pair may rally in the days ahead. Now that the one pillar of US growth has destabilized – the labor market – if existential concerns about the Euro-Zone remain on the sidelines, the quantitative perspective for EURUSD is quite bullish in the periods ahead. –CV