- British Pound has been best performer in April since 2009.

For April, we continue to focus on the period of 2009 to 2014. The small sample size is not ideal, and we recognize that there is increased statistical stability with using longer time periods. However, because of the specific uniqueness of the past six years relative to any other time period in market history - the era of quantitative easing - we've elected to attempt to increase the stability of the estimates with the shorter time period. 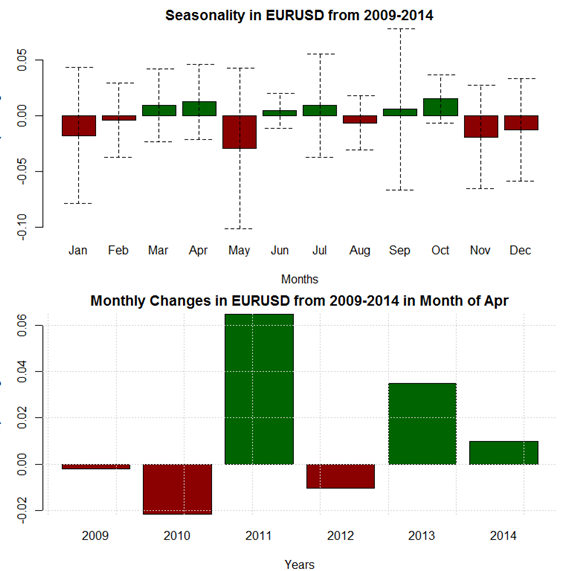 While EURUSD’s performance in April has been split evenly between gains and losses since 2009, the average move has been skewed positive to the tune of +126-pips. In light of the fact that EURUSD underperformed its March seasonality expectation – capping off the worst quarter (-11.2%) in the Euro’s short existence (since 1999) – a more neutral tone may be appropriate over the coming weeks. 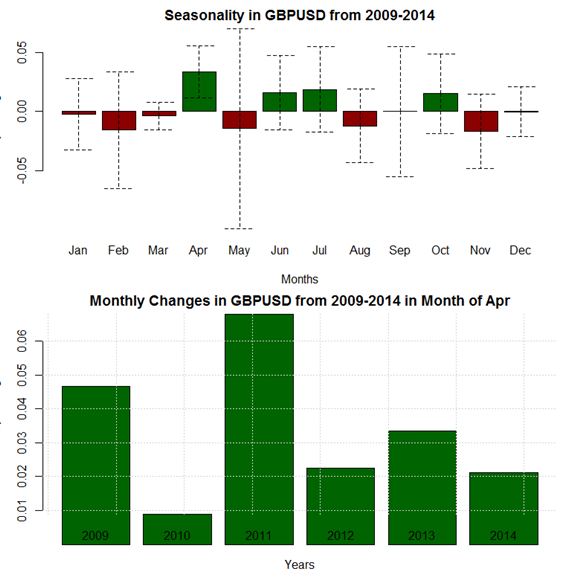 April has consistently produced gains in GBPUSD over the past six years, with an average gain of +335-pips in the QE era. Although much of this positive skew can be attributed to an outsized performance in 2011, the seasonal tendency is clear cut. The one asterisk to attach to GBPUSD this April is the May 7 general election around the corner; the last time there was a general election was in May 2010. April 2010 was the weakest performing April over the past six years, so it might be best to temper expectations to GBPUSD despite the otherwise positive quantitative outlook. 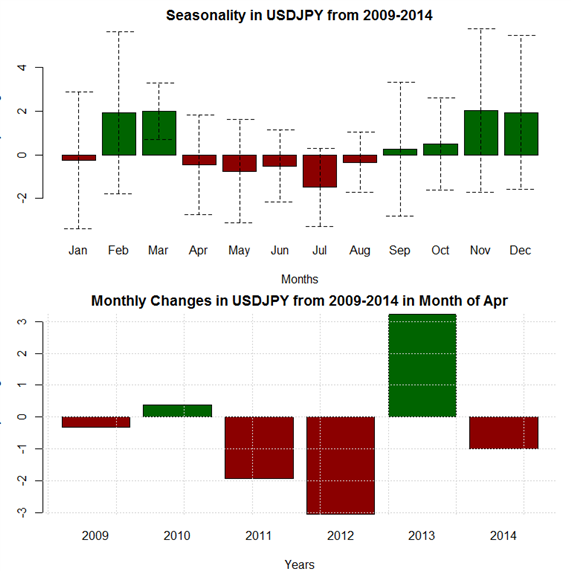 Although the Japanese Yen has fared poorly over the course of the past two and a half years, it’s difficult to ignore the mid-year consolidation that has occurred across many of the JPY-crosses. Accordingly, we’re watching the dawn of the most bullish stretch of the year for the Yen, with USDJPY having lost ground from April to August on average since 2009. Losses have developed in three of the last four years, with April 2013 standing out as an outlier gain due to intervention by the Bank of Japan. Without BoJ intervention, USDJPY appears primed for a weaker month. 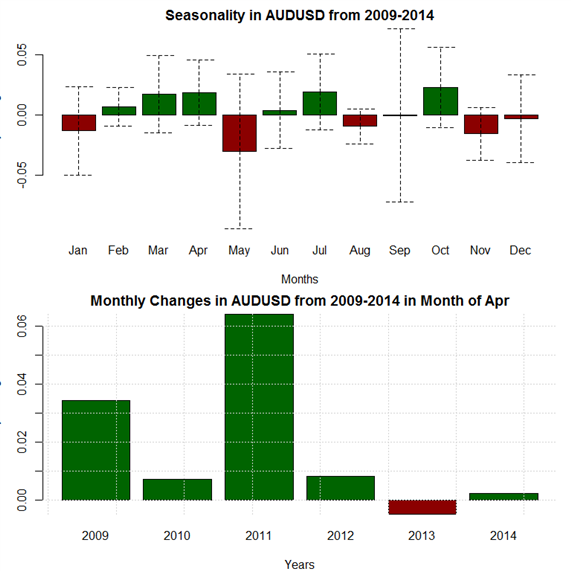 AUDUSD has typically seen higher prices in April, but the average gain of +186-pips during the QE era is a bit misleading. The average gain the past three years is a meager +19-pips, with increasingly narrow trading conditions over the same time. What might help propel AUDUSD higher is the large short position held by speculators in futures markets. 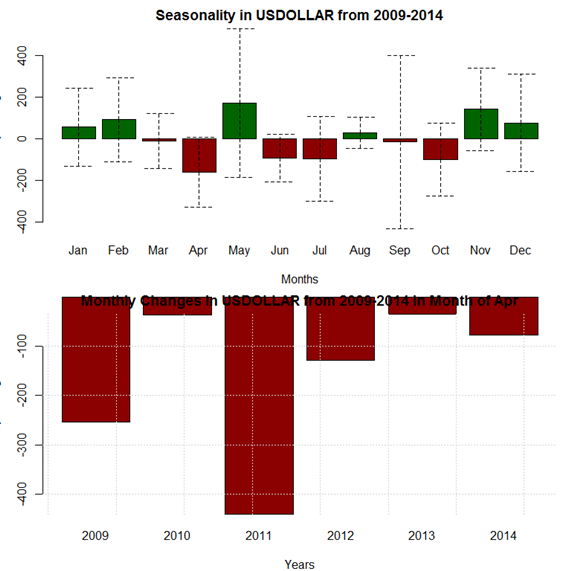 April has been the worst month of the year for the USDOLLAR Index during the QE era, with losses having materialized in each of the past six years. In consideration that the market is still heavily long the US Dollar (71.2K net-long contracts among speculators), there is a strong possibility that market forces are geared towards a disappointing start to Q2’15 for the greenback. 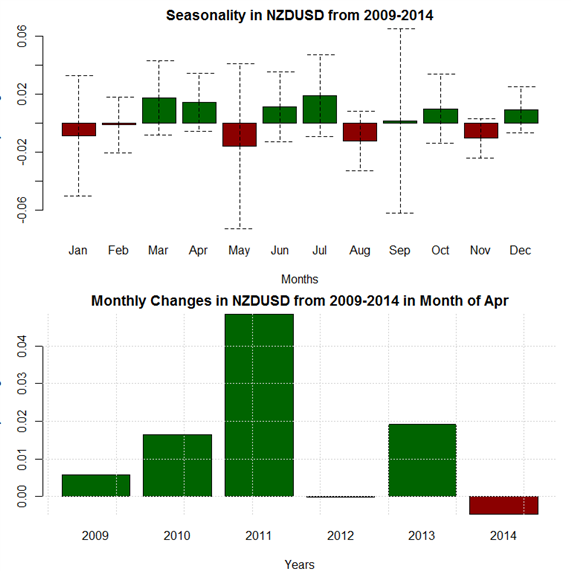 The New Zealand Dollar has usually found success against the US Dollar in April, having posted gains in five of the past six-years – although the only loss came last April, bucking the predominant trend. Overall, April has been the best month of Q2 and the third-best month of the year overall for NZDUSD.NZDUSD might present one of the more appealing opportunities if the US Dollar declines in April. 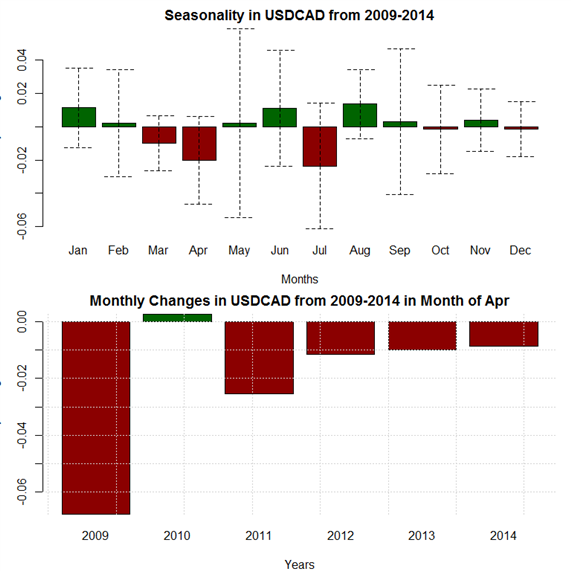 April has been the second worst month of the year for USDCAD, trailing only July in terms of underperformance. Losses have materialized for four consecutive years and five of the last six overall, leaving USDCAD’s sharp rally in Q1’15 very much in question. 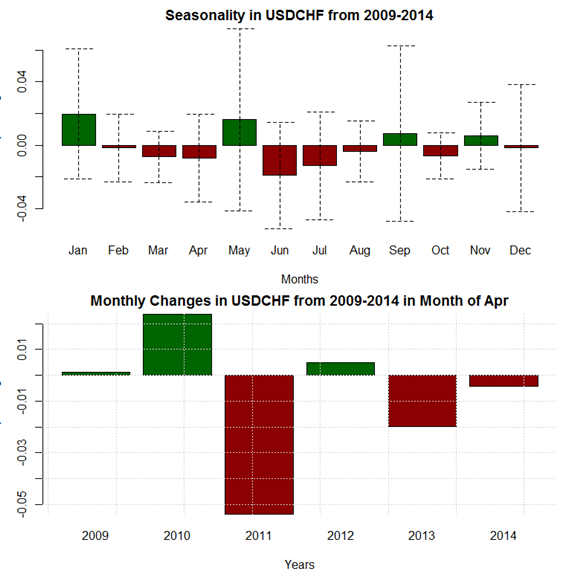 While USDCHF’s average performance during the QE era has been negative, losses have only developed in half of the time. April barely cracks the top three worst monthly performances of the year, but it’s worth noting that much of this data is rooted in the period when the SNB was holding up the EURCHF floor. A more concerted ‘risk-off’ environment would be necessary in order to provoke a meaningful USDCHF pullback. Otherwise, a buoyant US Dollar could see a minor outperformance here. 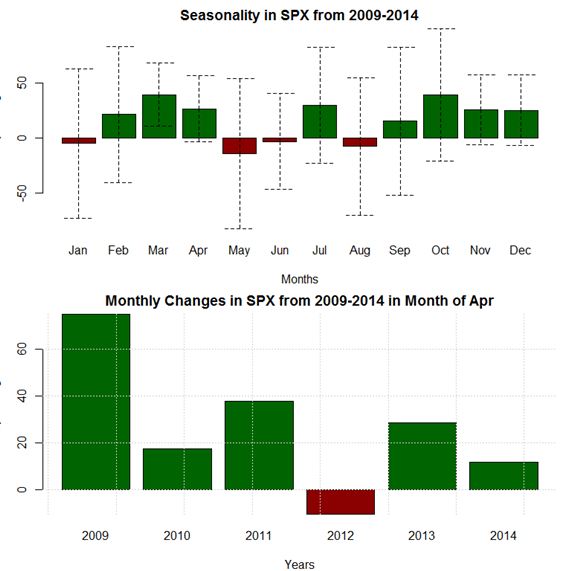 We’re close to exiting the bullish part of the year for the S&P 500,* but not just yet. April has been the only positive month of Q2 during the QE era, with the adage ‘sell in May and go away’ dictating a mid-year selloff. The odds seem to favor further general sideways action in Q2’15: five of the past six years have produced gains. A miss on the seasonal performance this April could be a warning sign that a deeper trough is due over the rest of the quarter. 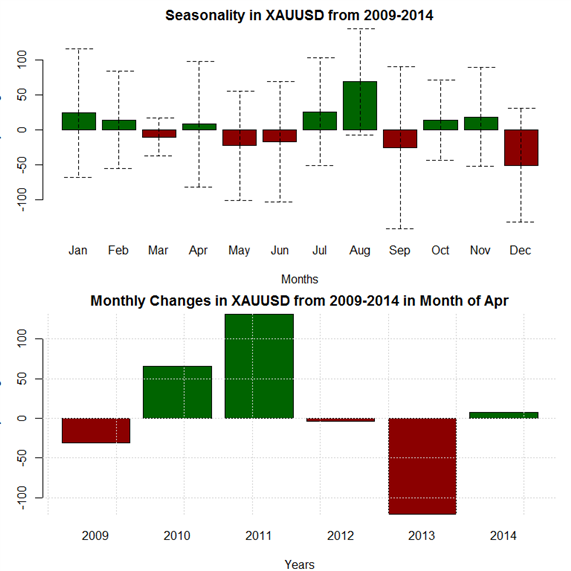 Gold has had a weak start to 2015, but April may offer reprieve. Of all the seasonality outlooks, Gold is actually the least clear: gains and losses are split evenly during the QE era, with both outsized gains and losses having been seen alongside minor moves. What the quantitative study might reveal to us is not an expectation of direction, but rather of volatility: April has offered up one of the widest performance ranges of any month (next to January and September) all year long.