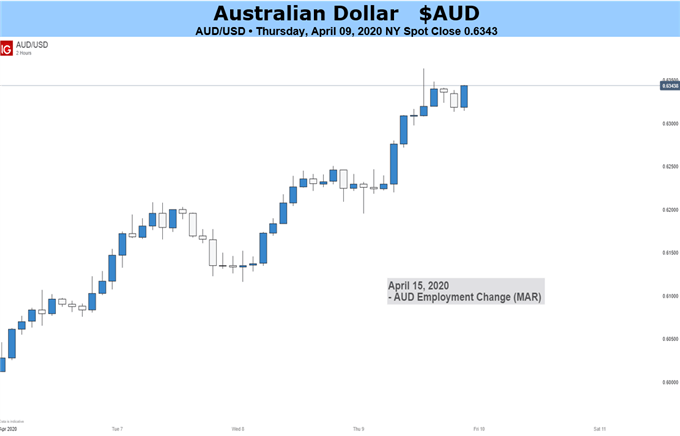 The Australian Dollar heads into a new trading week very close to one-month highs against its US cousin and well above the March lows which have marked, so far, the currency’s coronavirus-panic nadir.

The Aussie has been lifted by forthright global efforts to shield economies from the pandemic’s worst effects, but also by its own central bank’s reluctance to cut interest rates to zero for the first time. Futures markets had narrowly tipped such a reduction but the Official Cash Rate stayed at 0.25% on April 7. Oil price rises have offered support to the broader commodity complex too and, with Australia a major raw material exporter, that’s likely good news for the currency. Signs of better economic activity in China have also helped. 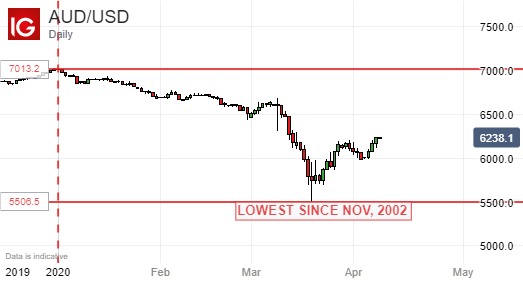 However, Australia’s country’s prized, rare triple-A credit rating has been placed on negative watch by the S&P Global agency. While this is clearly worse news it may not prove too damaging for the Australian Dollar as most of Australia’s peers have become accustomed to downgrades already, their national debts swelling as the cost of fighting the last financial crisis.

Still, the Aussie’s current relative vigor is surprising by most counts. Of course the coronavirus remains in charge of global markets, with shutdowns widespread and forecasts of global recession not hard to find. This is hardly an environment in which a growth-correlated currency can be expected to thrive for very long.

The coming week will bring news of domestic business and consumer confidence, with neither likely to hold up. The big release, however, will be official employment numbers which are due on April 16. Australian job creation has been formidable for years, and has offered the country’s currency support even when it was scarce elsewhere.

The Australian government has just voted to subsidize the wages of six million workers for at least the next six months. That may well cushion some of the prospective blow but unemployment is still expected to rise very sharply from its current 5.2%.

Moreover, the market’s reaction to the latest Financial Stability Review from the RBA suggests that there is some appetite to take profit on the Aussie’s recent gains. The review was realistic and clearly concerned about prospects for the Australian economy. But it was arguably no more so than might have been expected and, perhaps, even a little more upbeat on the likely resilience of domestic finance.

That the Aussie should have fallen quite hard after its release suggests that demand is not very solid at current levels. With this in mind it’s another bearish call this week.