The Australian Dollar fell on Thursday as the Reserve Bank of Australia’s Financial Stability Review painted an admittedly predictable gloomy picture of the coronavirus’ impact.

However, the report was perhaps no less downbeat than might have been expected at this point, and it looks as though its importance as an excuse to sell the currency may have been exaggerated by those who want to take profit on recent gains. 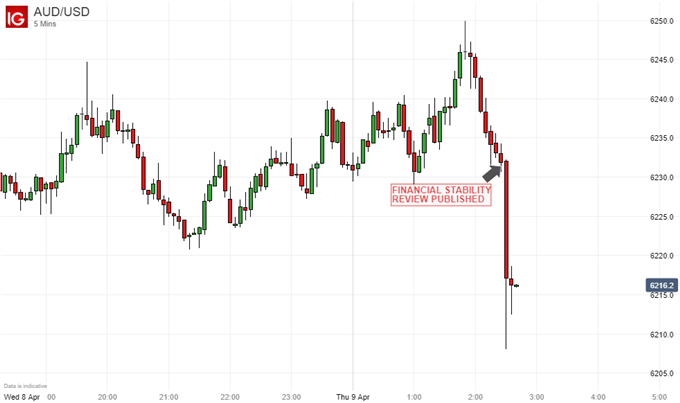 The RBA said that heightened uncertainty related to the pandemic was ‘compounding the usual volatility in financial markets.’ It also pointed out that monetary policy can’t address the issue that was driving economic contraction, but that it could serve as a bridge, while fiscal stimulus offsets some of the worst affects and health authorities try to contain the virus’ spread.

The RBA also said that the financial system in Australia enters this period in a strong position, with banks showing high profitability and good asset performance, even as their ability to take on and manage risk may diminish.

The central bank also noted that a range of risky assets had been priced at high levels before the outbreak, but that the sudden outbreak of the virus had materially changed the comparatively rosy outlook for these.

As perhaps the most obviously growth-correlated, widely traded currency the Australian Dollar was hit especially hard by the collapse in risk appetite which accompanied the coronavirus’ global spread.

However, having plumbed near-eighteen-year lows last month, AUD/USD has staged a remarkable revival. This has come about as various, massive remediation has been unleashed across developed economies, crowned by the US’ $2 trillion dollar effort.

The currency got a little domestic support this week too when the Reserve Bank of Australia declined to cut interest rates to zero. Futures markets had narrowly expected it to do so.

Still, the global growth prognosis remains abysmal this year with joblessness soaring across the world. Risk appetite must still be regarded as on a hair trigger and, this week, Australia’s prized, rare triple-A credit rating was put on negative watch by the S&P Global agency.

The Australian Dollar market has clearly found some reasons to buy as March moved into April, but 2020’s clear downward trajectory has yet to break.