The Australian Dollar got a modest lift on Tuesday after the Reserve Bank of Australia left interest rates alone at their record low, despite expectations that they might reduce them again.

Futures markets had attached a probability of nearly 60% to another reduction according to index provider ASX, with expectations having grown markedly in the last week as more and more governments had stepped up their economic response to the coronavirus.

The RBA conceded in a statement that the year’s second quarter is likely to see a ‘very large’ contraction in the Australian economy with unemployment up sharply. However, the central bank said that it would keep managing bond markets to keep 3-year yields at 0.25% and that co-ordinated monetary and fiscal response would soften the economic blow.

It’s clear that the central bank considers yield curve control to be a more effective easing measure and, after years of record low interest rates already, that’s a valid argument.

It also said that current policy settings will remain in place until progress is made on the inflation and employment fronts. 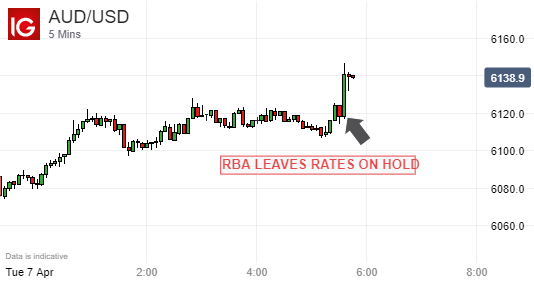 AUD/USD was higher after the RBA showed its hand, but not to a huge extent, suggesting that this was always perhaps a closer call than futures market indications might have suggested.

The RBA has in the recent past been realistic about the likely benefits of further monetary loosening after such a long period of accommodation and is clearly reluctant to pursue the sort of zero-rate policies seen elsewhere.

The Australian Dollar has been hit hard this year as the coronavirus spread puts the global economy into deep freeze. The currency is perhaps the premier growth-correlated foreign exchange market play, with its home nation hard-wired to so many areas where the contagion has wreaked havoc, from China’s slowdown through tourism and energy exports. 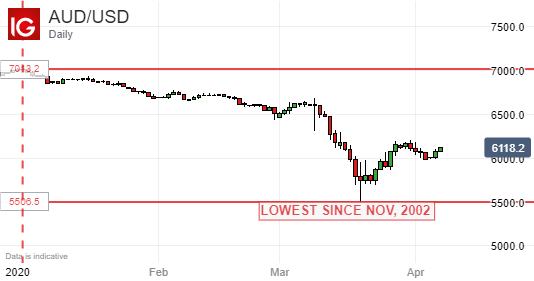 AUD/USD has risen appreciably from the near eighteen-year lows plumbed in March as concerted global efforts to offset the virus’ dreadful human and economic consequences have reassured investors.

However the currency is likely to remain on the back-foot, even if it will retain a small yield advantage over some currencies, including the US Dollar. Its growth correlation means it will likely stay vulnerable until there are clear signs that the coronavirus has been defeated and that inflation is rising again in Australia.

That will not be soon.