The Australian Dollar didn’t move far Thursday as the Reserve Bank of Australia cut a quarter percentage point from its benchmark lending rate in a widely expected move, part of that country’s economic response to the ravages of coronavirus.

The Official Cash Rate target had already been cut this month, but Thursday’s action takes it down to 0.25%. That’s a level which the RBA has previously suggested might be some sort of effective lower bound, although it may now be safer to assume that any such bets are off until the contagion has been defeated.

In a statement the RBA acknowledged that the disease has caused ‘major disruptions to economic activity’ worldwide, and that both monetary and fiscal policy will have key rolls to play in mitigating the impact.

The central bank said that the OCR target will not increase until progress is made towards full employment, and is confident that inflation will be sustainably within the 2-3% target band. This may be a veiled hint that the bar to still-lower rates is now very high, and that fiscal policy must also bear some stimulus load,

The RBA will also target a yield on three-year government bonds of around 0.25% via secondary market purchases, while offering easier funding terms to banks and other businesses.

The Australian Dollar market was as close to completely certain as these things ever get that rates would go lower on Thursday, and AUD/USD didn’t really have much scope to move on confirmation. The news also broke as the US Federal Reserve widened its own monetary support with the announcement of a Market Mutual Fund Liquidity Facility (MMLF) to help the flow of credit to households and businesses. 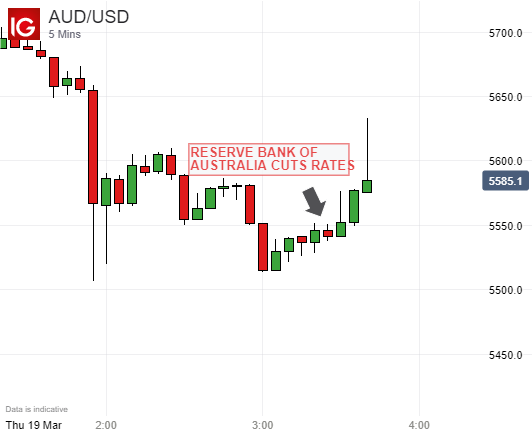 However, as perhaps the pre-eminent growth-correlated currency the Australian Dollar has been hit especially hard by the spread of coronavirus and its attendant broad retreat from all such assets. 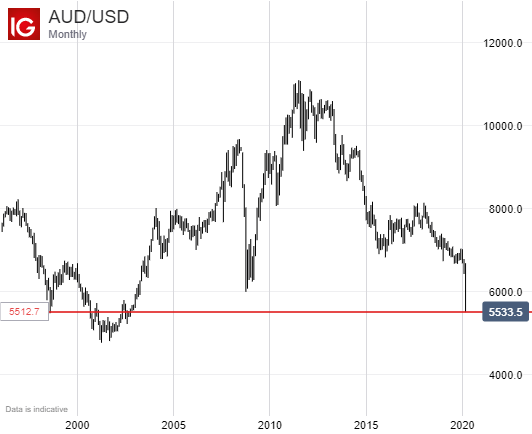 While the US Dollar has retained and burnished its haven status in the wake of the outbreak, taking AUD/USD down to lows not seen since the fall of 2002. It’s highly unlikely that any major rebound will be seen for the currency while coronavirus dominates the headlines, but signs of a growing, coordinated global fiscal response may slow its fall.