US Dollar Primed for CPI, FOMC as GBP/USD Rally Continues

US Dollar Holds Resistance Ahead of Big Day of Drivers

The final FOMC rate decision for 2019 is on the economic calendar for tomorrow at 2PM ET and before that, we get November CPI results that are set to be released tomorrow morning. There are minimal expectations for any actual moves from the Federal Reserve and CPI is expected to come in right at 2%, with the expectation for Core CPI to print at a familiar 2.3%. 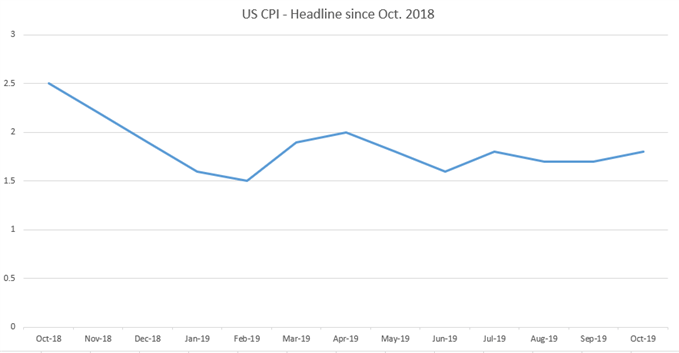 But, as has become usual, the importance of tomorrow’s rate decision will be nested within the details, specifically around the FOMC’s dot plot matrix as well as the accompanying press conference with Chair Powell. At the most recent rate decision, the FOMC cut rates for the third time in as many meetings in an aggressive change-of-pace from last year’s four hikes. But, at the press conference around that rate decision Chair Powell framed that as the last such move unless or until something changed, pledging that the Fed wasn’t looking to hike rates again unless there was a ‘really significant’ rise in inflation. Well, that hasn’t happened yet so the fear of rate hikes appear to be off-the-table. More interesting, however, is the expectation for future cuts. As looked at yesterday, going out to next December brings up a considerable number of questions as there’s a current 65.6% probability of getting at least one more cut from the FOMC by December of 2020.

Rate Expectations Around the FOMC (Per CME Fedwatch) 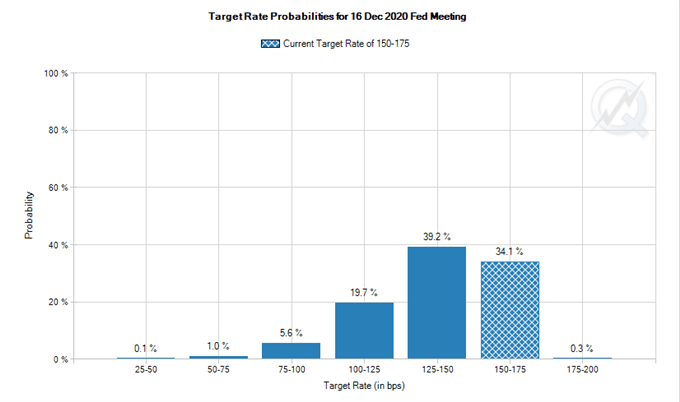 US Dollar Holds Resistance Ahead of the Fed

The fourth quarter of this year has been of interest for USD price action. The Greenback gained through the first three quarters of this year even despite the dovish flip at the Fed and the two rate cuts that were seen ahead of the October open.

But all was not well in that bullish trend as buyers were much more shy at or around highs than they were at lows or around support, leading to the build of a rising wedge pattern that was looked at coming into Q4. The month of October is when that broke and sellers made a re-appearance, driving price action in the currency for most of the month as a fresh low was set at the November open. November brought a range, as prices retraced 50% of that October sell-off, finding resistance at a key area on the chart running from 98.33-98.50.

Sellers showed up again around the December open and pushed-lower for most of last week. A quick counter-trend move showed around last week’s blowout NFP report, and price action pushed up to another area of resistance running around the familiar level of 97.70.

At this point, the battle lines are somewhat defined as there are two resistance areas lurking above current price action to go along with a key zone of support that currently marks the four-month-lows in DXY.

Going along with that theme around the Fed in 2019 has been a very pronounced theme in Gold prices. After bottoming-out below the 1280 level in June, buyers rushed back in to push prices above 1550 in early-September. But since then, that big picture bullish trend has been on hold as price action has digested a chunk of that prior breakout.

At this stage, support has held around the 38.2% retracement of that prior move and a bullish trendline has recently come back into play. I had looked into this yesterday and the potential for Gold strength around USD-weakness scenarios remains of interest ahead of tomorrow’s FOMC.

Recommended by James Stanley
For a Longer-Term Look, Download our Gold Quarterly Forecast
Get My Guide

GBP/USD Fresh Six-Month-Highs Ahead of a Busy Backdrop

In GBP/USD, there’s another factor of consideration as UK voters head to the polls for another General Election set to take place on Thursday. In anticipation of a stronger Tory showing price action in GBP/USD has been in the midst of an aggressive breakout over the past few months, coming in stark contrast to the strong sell-off that had shown through the middle portion of this year.

At this stage, prices in the pair near another fresh six-month-high that was set earlier this morning and the bullish trend appears quite overbought. But – this is where tomorrow’s FOMC can come into play, similar to last week’s NFP, as a quick flare of USD-strength could allow for pullback; which may be enough to allow for entry into bullish trend strategies ahead of the Thursday election, for those looking to get long in the GBP/USD move but who don’t want to chase whilst at fresh highs.