Euro Falls Further, USD to Fresh Highs Ahead of Heavy US Econ Calendar

- It’s a holiday in the US and UK, but European markets are on the move as it appears as though we’re heading for another round of elections in Italy. This means that we could see snap elections out of two of the most pivotal nations in Europe at some point this summer, with caretaker governments currently managing both Spain and Italy. This could keep Euro markets volatile in the near-term.

- After today, this week’s economic calendar has a heavy US focus, with high-impact items on the docket for every day of this week. But – with that said, ongoing political risk in Europe could overshadow this outlay, as markets attempt to price in risk around new themes of political uncertainty. We looked at reversal setups in the DAX and FTSE in this week’s equities forecast; and we looked at the short-side of the Euro in our FX Setups for this week.

The big push point for this week is coming from continued political risk in Southern Europe, and it now looks like we may have another round of elections in Italy at some point this summer. This now means that we have caretaker governments in both Spain and Italy, two of the largest and most important economies within the bloc; and this makes it near impossible for anything to actually get done at the EU’s June summit. This also means that we have the potential for significant European market volatility as we move into the summer. Coming into this week, we looked at reversal formations in both the German DAX and the FTSE100, each of which may be helping to mark major market tops in those respective equities indices.

This week starts with a holiday in both the US and the UK, but after today, this week’s economic calendar has quite a bit of headline risk; and there is a heavy US focus as we have high-impact USD items on the schedule for every day this week. And then two weeks from now (June 12-13), we have the next FOMC interest rate decision with markets carrying a very high probability for a hike. As has become usual, the hike is likely priced-in well-ahead of the decision, so the larger matter of importance is just how hawkish the bank might be in the second half of this year, and the data that will be revealed this week will likely help to determine just how hawkish the Fed may be in the rest of 2018. 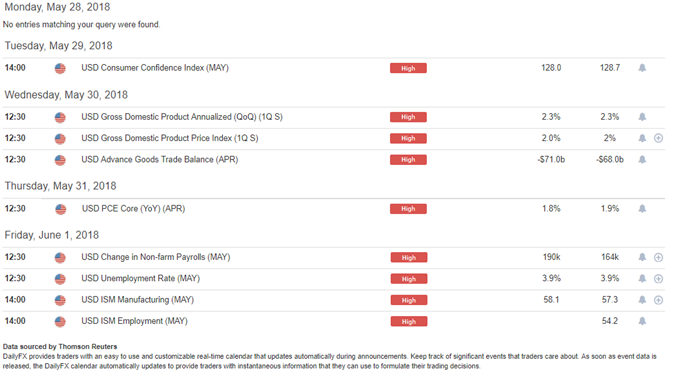 Kicking off this holiday shortened week, the US Dollar is trading at another fresh 2018 high. Prices initially gapped-lower to start the week, pulling back from a key area of resistance that started to get tested last week. But that pullback couldn’t last for long, as bulls soon returned to push DXY right back up to fresh 2018 highs.

A large part of this move appears to be Euro-related, as the single currency gapped-higher to start the week to go along with that gap-lower in DXY; and that move has been soundly reversed as bears came right back into the Euro. The driver here is one of a political nature, and the situation around Italy right now appears very fluid in nature. At this stage, it appears as though Carlo Cottarelli has been charged to produce an interim government and it seems as though his primary aim is to guide Italy towards a new election.

The bigger factor is one of anticipation: If we are to get another round of elections, this could lead to even more discord, and perhaps even a greater majority for the Five-Star Movement or the League. So there is plenty of risk involved, and we can see that being reflected in the currency. While initially gapping-higher on news that Italy’s president Sergio Mattarella rejected Eurosceptic Paola Savona as economy minister, sellers soon returned and pushed EUR/USD right back down to fresh 2018 lows. This has fast become a situation in which seemingly positive events have been mere pullbacks in the bearish trend. Will this finally find a bit of satiety this week as prices grind through a big area of long-term support?

Cable Tries to Find Footing After a Brutal Six Weeks

A couple of weeks ago, it looked as though the British Pound had finally found some element of support. In the prior month, the currency had been battered by a variety of themes: First a disappointing inflation report, and that was followed by a disappointing GDP report. Both of those items helped the Bank of England to go really dovish at the ‘Super Thursday’ rate decision earlier in the month, and collectively those factors helped to propel GBP/USD from above 1.4300 all the way down to 1.3500; all in the matter of a few weeks.

But last week brought some additional Brexit risk into the equation when Scottish Prime Minister Nicola Sturgeon pledged to re-start the drive for Scottish independence. This helped to push GBP/USD over the ledge of support, and prices soon fell-down to an area that had previously held the lows in December of last year. This area came into play on Wednesday of last week, and prices remain supported in this area.

One of the more noteworthy non-Euro moves last week was a re-emergence of strength in the Japanese Yen. This appeared around the same time that the US pulled away from the summit with North Korea, set for Singapore on June the 12th. On the US side, it appears as though plans are moving forward with continued discussions, and most indications around that scenario appear to be positive in nature.

This then begs the question of whether Yen weakness might soon return. After previously trending higher in mid-April and mid-May, the pair posed a rather stark turn-around last week to run down to a key support zone. This support zone runs from 108.62 up to 109.19, and so far that area has helped to hold the lows. This keeps the door open for top-side scenarios, looking for a re-test of the 110.00 level, followed by another test above the 111.00-handle.

This is one of our FX setups for this week, and for those looking at setups away from a strong US Dollar, this could be attractive. We had looked at the short-side of this pair in mid-April, just before that rampant Dollar strength began to show. Six weeks later and prices in NZD/USD have made a full trip from resistance to support; and as of last week, buyers appear to be helping to hold the lows in the pair.