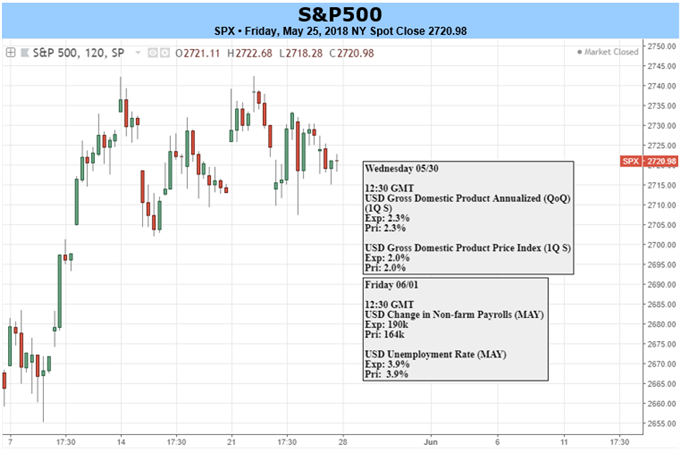 Are you looking for longer-term analysis behind the S&P, DAX or FTSE? Click here for our Trading Guides, which includes a Quarterly Forecast for Equities.

Next week marks a holiday in the US on Monday, but after that, we have high-impact economic items out of the United States every day of the week. And then two weeks later, we have the Federal Reserve rate decision for June, and there remains a very high probability of a hike at that meeting. More important to price action, however, appears to be the bank’s tolerance towards rate hikes in the second half of this year. Two additional hikes, to bring the total to four for 2018, could produce considerable pressure in the US Dollar along with a downside move in US equities. Next week’s data will be key for the bank as they approach that meeting in two weeks, and this is likely at least part of the reason for the S&P 500’s range that built-in this week.

The Dow Jones Industrial Average was a bit more volatile this week, gapping-higher to start the week and then running above 25,000 for a test of a key psychological level. That enthusiasm couldn’t hold, however, and as we wrote on Tuesday, bearish short-term strategies could be favored as a gap remained from that weekend move. That gap quickly filled on Wednesday, and prices meandered through the rest of the week. The levels of relevance here appear to be around 24,500 and 25,075. A break above this recent range opens the door for a test towards 25,370, while a breakdown below 24,500 exposes prior swing lows towards 23,175.

The DAX has spent most of the past two months in the midst of a rip-roaring rally, aided in no small part by the pullback in the Euro. That rally erased as much as 78.6% of the prior bearish drop that showed earlier in 2018, and that level was hit on Tuesday as the bullish move continued. But Wednesday brought a change of pace, and Thursday brought some more, as concerns started to grow around European political risk. This carries the potential for a deeper down-side move, and on the weekly chart we have a bearish engulfing pattern.

We have a similarly bearish formation showing in the FTSE, as this week produced a bearish pin bar after a rather aggressive reversal showed-up on Tuesday, Wednesday and Thursday. This opens the door for reversal setups in the index, and traders can look at stops above either the prior high around 7775, or the eye of the wick from the pin bar around 7900.