Euro, US Dollar Focus in the Forex Markets This Week

- This week brings a number of drivers to the FX market, with heavy emphasis on European inflation and a batch of US-related items to be released throughout the week. Out of the US, attention will be on new Fed Chair, Jerome Powell, for his first Humphrey Hawkins testimony on Capitol Hill. When Mr. Powell delivers the Semiannual Monetary Report to Congress, he will begin with prepared remarks after which the floor is open for questions. And those questions can be wide-ranging.

- The US Dollar is holding on to gains from what was a surprisingly strong week. In the week before, the Greenback perched-down to fresh three-year lows; but after a bullish engulfing candlestick formed on that Friday, strength continued for most of last week. As we open this week, there is both a bullish and a bearish case behind USD.

This Week’s Calendar is Full of Drivers with Heavy Europe, US Focus

This week’s economic calendar opens up a bit as we have a number of high-impact releases on the docket. Of particular interest will be a batch of Euro prints on Tuesday and Wednesday along with a series of US Dollar related-items spattered throughout the week. Out of the US, the big item is Mr. Jerome Powell’s Humphrey Hawkins testimony, or the ‘semiannual monetary report to Congress.’ This will take place on Wednesday and Thursday, and we’ll see Mr. Powell deliver some prepared remarks before taking questions from both sides of Congress (the House is on Wednesday, the Senate on Thursday).

The high-impact events on this week’s economic calendar are listed below, all times in Eastern. 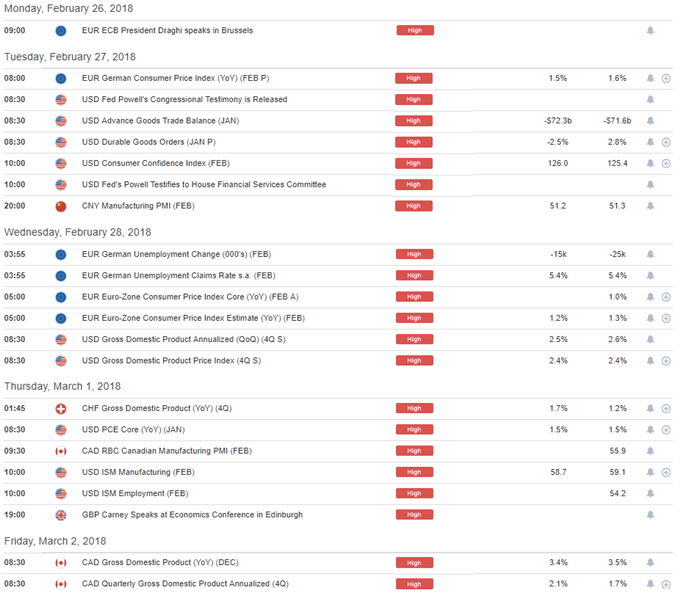 US Dollar – Bullish Continuation or Return of the Bears?

The big Forex item from last week was strength in the US Dollar. The Friday before last week saw a bullish engulfing candlestick form off of fresh three-year lows; and that strength continued for most of last week. On Friday, we looked at the initial stages of congestion after DXY tried to take out the 90.00 level, and this led to a bull pennant formation on the hourly chart.

After gapping higher and then testing the 90.00 level shortly after this week’s open, the Dollar trickled-below support to help produce fresh short-term lows. But, a bit of strength has started to show ahead of the US open, and prices are now pushing back towards prior points of short-term resistance.

US Dollar Hourly Chart: Pennant Starting to Give Way as Volatility Builds Around USD 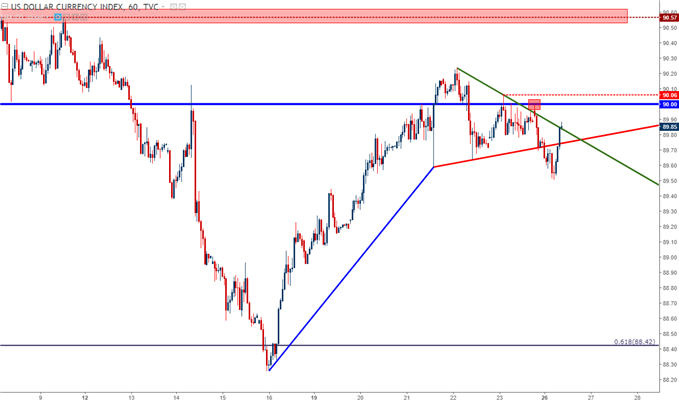 The Bearish Side of USD

The bearish argument behind the US Dollar as we open this week would be looking for continuation of the trend that’s been in place for a year now, looking at last week as a blip in the radar that can allow for short-side positioning driven by the expectation for that trend to keep going.

Last week’s rip-higher ran into a bearish trend-line projection, and last week’s swing high can help with strategizing short-side plays. Last week’s swing-high around 90.24 can be used for stop placement, while potential resistance levels inside of that can be used to look for entry. 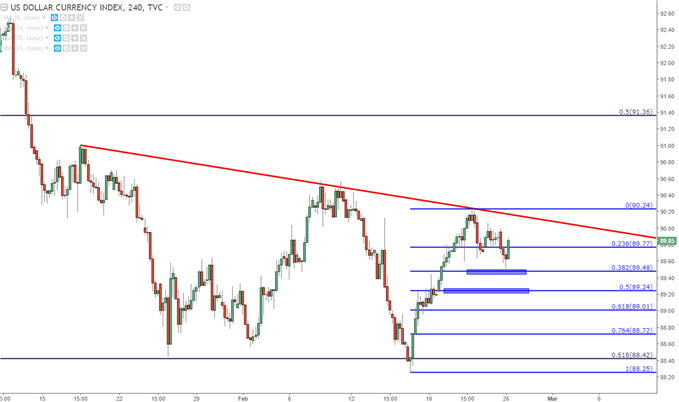 The pair that we’ve been following for short-side USD scenarios has been USD/CHF. Prices set a fresh two-year low just a couple of weeks ago, and last week brought a retracement that produced a lower-high. For those looking at bearish continuation in USD this week, the short-side of USD/CHF can remain as attractive. 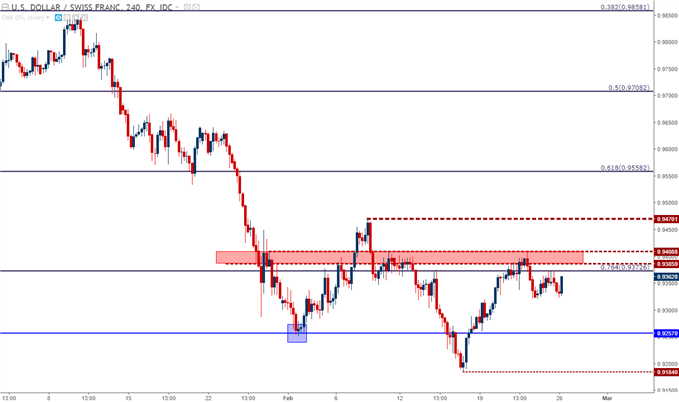 The Bullish Case for the US Dollar

Given the bearish break of the bull pennant on the hourly combined with the above four-hour chart, it might be difficult to muster a bullish view behind the Greenback. But – in markets, it’s those outlier possibilities that deserve focus and the fact that the Dollar remained bid last week is still a fact that traders need to contend with. Longer-term oversold conditions in the US Dollar can keep the short-side vulnerable to squeeze scenarios, particularly in areas as we’re in now where most signs seem to be pointing-lower on the charts.

Also – if we combine the above with the types of drivers out of the US this week, and we have to add an additional amount of uncertainty. Wednesday and Thursday bring the first real ‘getting to know you’ items around new Fed Chair, Jerome Powell. This is something markets haven’t seen yet, or even heard and anytime there’s something new in the environment you have to open to the possibility of something new taking place in price action. While this is far from a certainty, it’s at least worthy of mention.

On the below two-hour chart, we’ve added a Fibonacci retracement to last week’s bullish move in the effort of finding jump-off points for continuation. The 38.2% and the 50% retracements both come-in around interesting areas of prior inflections; and support showing here can open the door for top-side strategies in USD. 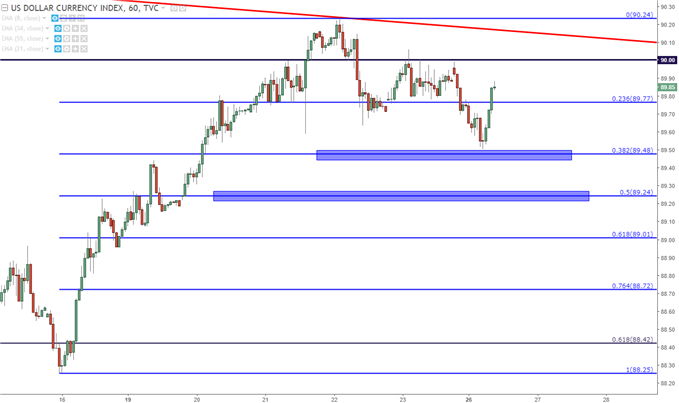 For USD-Strength Scenarios, Check out AUD/USD

While the net of USD’s price action for this month has been a lot of back-and-forth, AUD/USD has started to show tendencies of a bearish turn. This started in late-January after the pair had failed after setting fresh yearly-highs; and when bears came-back, they came back with a vengeance.

On the four-hour chart below, we’re looking at a symmetrical wedge after the early-February sell-off in the pair; and notice how the 23.6% and 38.2% retracement have helped to mark a series of recent lower-highs in the pair. 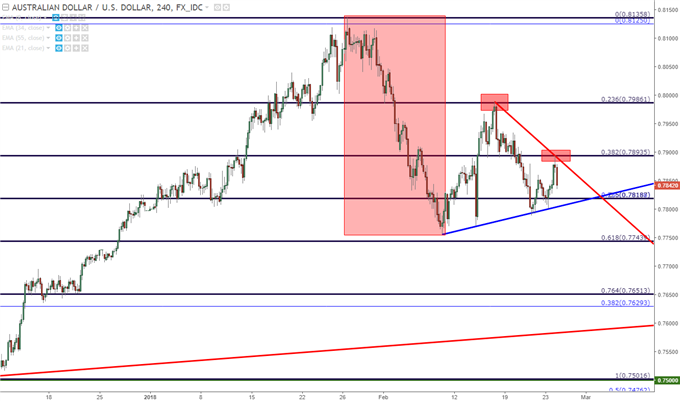 There is an X-Factor for this week across FX markets, and that’s the Euro. The Euro sees a couple of vital prints with inflation being released out of Germany on Tuesday and the Euro-Zone as a whole on Wednesday. Given that DXY is more than 57% denominated in the Euro, there is the distinct possibility that this week’s FX trends are driven by the single currency with the US Dollar just going along for the ride.

The chart itself, at least at this point, is devoid of any significant fireworks. A prior support zone is help to set short-term resistance while the ‘s2’ level that we’ve been following helped to set the lows in the overnight session. These are the same group of levels that we’ve been following for most of February, and the fact that this is the case indicates that the Euro could be somewhat of a sleeping giant of volatility should markets get the proper motivation from this week’s inflation prints. 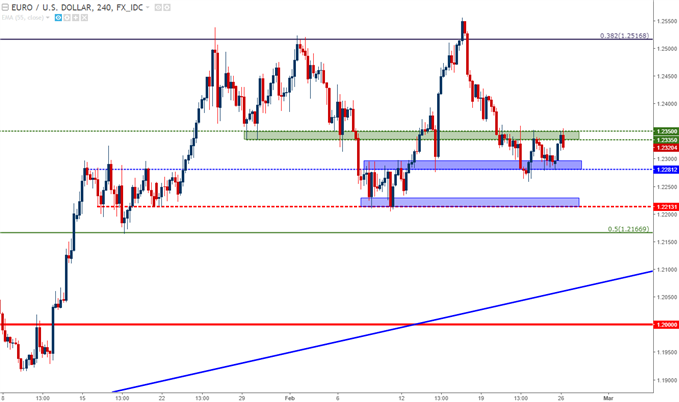 Euro Strategy Away from USD

Given that both the Euro and US Dollar are in the spotlight this week, combined with the fact that both are going through longer-term stories of strength (Euro) and weakness (USD); and traders may want to look at Euro-positioning away from the US Dollar in the effort of isolating variables.

For those looking at Euro-weakness, EUR/JPY can be attractive. The pair just set a fresh five month low on Friday, and this was a breach of a big support zone that had previously seen multiple inflections in the pair. Prices have tip-toed higher in the early portion of this week, but if we do see Euro-weakness around those inflation prints, this could lead to an extended downside move given that that big zone of support has started to give way. 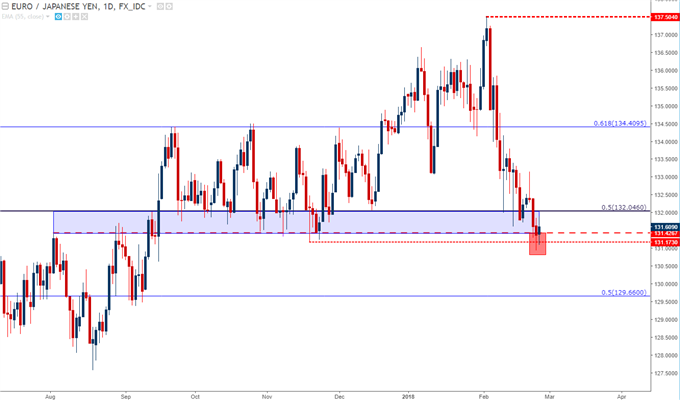 For Euro-Strength, Check out EUR/AUD

EUR/AUD has spent most of February trying to break-out to fresh two-year highs. It’s been a futile effort so far, as any trip above the prior high at 1.5773 has been thwarted by sellers. 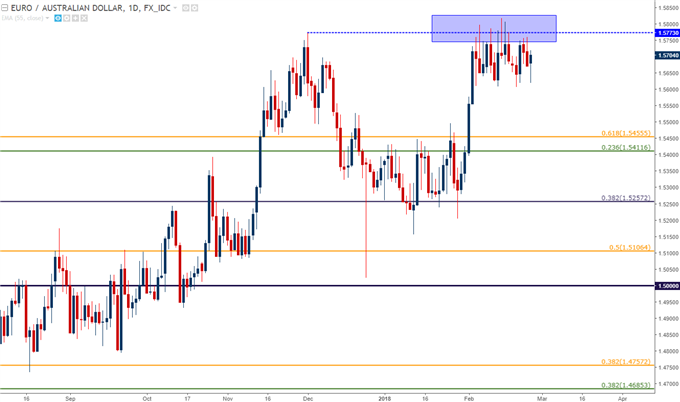 On a short-term term basis, that persistent attempt to take out those highs has produced a near-term range. The range itself doesn’t have great distance, so this may be unattractive from a pure perspective; but traders can trade the range with a prior trend-side or breakout-expectation type of bias, looking to accumulate near support with relatively tight stops; and then looking to adjust those stops on revisits to resistance with the potential for a bullish breakout to show-up. 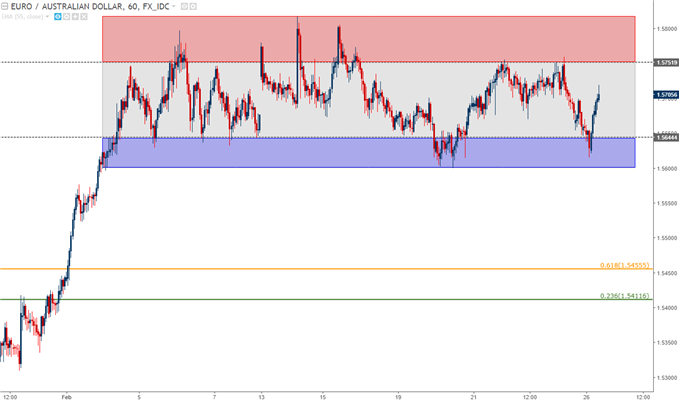