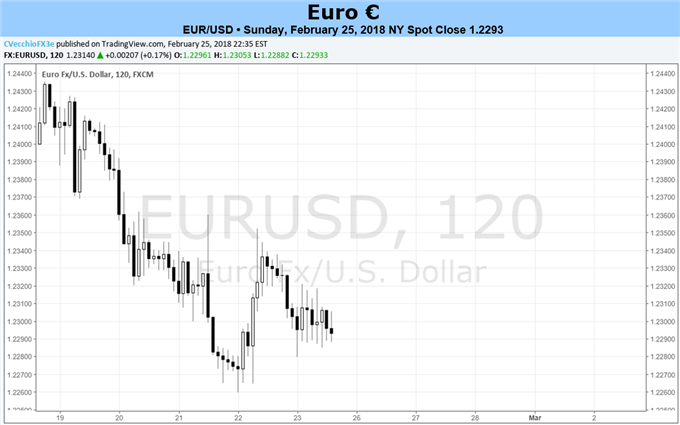 - Market participants may have gotten ahead of themselves with respect to their high expectations for Euro-zone growth in early-2018, as the Citi Economic Surprise Index has turned negative.

- Incoming inflation data for February could prove to be the defining moment for the Euro this month.

- The IG Client Sentiment Index has cooled on EUR/USD in the near-term, although the retail crowd remains net-short.

The Euro had a tough week as the calendar turned through mid-February, dropping against all but two of the major currencies. EUR/USD was the worst performing EUR-cross, dropping by -0.90%, followed by EUR/GBP, which fell by -0.51%. While no one single data release could be pointed to as the reason for broad Euro weakness, there has been a noticeable slide in how data has performed relative to expectations in general.

Indeed, it seems market participants’ expectations for Euro-zone economic strength got ahead of themselves, leaving the Euro in a situation where it may have likewise gotten too big for its britches. The Citi Economic Surprise Index, which was at +56.4 four weeks ago, entered last week at +35.7, and crashed down to -4.1 by Friday – the lowest reading since September 2016.

To an extent, the reason why data momentum may be cooling may be due to the Euro itself. The European Central Bank sees EUR/USD finishing 2018 at 1.1700, and at its current exchange rate, it’s more than 5% above the central bank’s forecast. Year-over-year, the Euro trade-weighted exchange rate is up by +9.7%, a veritable headwind for inflation.

Given that the ECB has made clear it wants to see inflation back near its +2% target on a sustainable basis before it sincerely exits all of its extraordinary, any signs that inflation is struggling could undercut speculation around the ECB removing its stimulus; a reaction that could sink the Euro.

Accordingly, as market participants are being forced to reconsider their bullish Euro bets, there is no data release in the current week – and perhaps, thus far year-to-date – than the preliminary February CPI report. Due in at +1.2% on the headline, this would be a small decline from the prior +1.3% reading in January (y/y). The core reading is due in unchanged at +1.0% (y/y). Neither points to an outcome where traders should be eager to rekindle speculation over a hawkish ECB policy turn.

Traders will need to stay cautious about the saturated state of the futures market, given that speculators are still holding a significantly large net-long Euro position. For the week ended February 20, speculators held +126.1K net-long contracts; barely a drop from the +127.3K held the week prior. Last week we said that “it will take a great deal of negativity – a change in tone by the ECB, a substantial turn in economic data – for traders to give up on their Euro bullishness.” If the preliminary February CPI report flounders, we may have arrived at the moment where Euro bulls capitulate.