- USD/CHF has tracked USD trends quite well of recent, having set a fresh two-year low in the pair as the DXY index set a new three-year low just last week. Since then, a bit of recovery has started to show and this has helped USD/CHF rally-up to a prior area of resistance.

- This opens the door for short-side setups, and an Analyst Pick has just been published for the short-side of USD/CHF.

The US Dollar extended its down-trend last week, extending the year-plus bearish trend in the Greenback. After the Dollar came into 2017 flying high on the back of the ‘Trump Trade’ or the ‘reflation trade’, gravity has set in and the Dollar has given back all of the post-election gains and then some. This theme has also happened as economic prospects have brightened throughout Europe, leading to some spectacular gains in EUR/USD over the past year. More recently, those gains have started to congest as EUR/USD began to test the 1.2500 psychological level; but all the while this has been going on, an arguably smoother trend has started to show in USD/CHF.

As we came into February, USD/CHF found support at a familiar level. The price of .9257 was the two year low in the pair, last traded at in August of 2015 during the heat of ‘China’s Black Monday’. That support was fleeting, however, as buyers came back and held prices above that level for more than two full years. When we re-engaged with that level in early-February, sellers dried up and a retracement started that saw prices in USD/CHF push all the way up to .9470.

But while this was happening, a bullish channel had formed. That bullish channel, when combined with the prior trend, gave us a bear flag formation; and when that broke-down last week as Dollar-sellers showed back-up, prices sank down to a fresh two-year low in USD/CHF at .9184. That pain trade in the US Dollar continued all the way into last Thursday night, at which point a bit of support began to show, and that theme of counter-trend USD strength has largely lasted into today’s price action.

At this point, price action in USD/CHF is testing an area of prior resistance that we’ve been following, and this opens the door for short-side strategies, targeting re-tests of prior lows. If the prior swing-high at .9470 is taken-out, the bearish setup is invalidated, making for an interesting area to investigate for initial stop placement. This could also justify a better than one-to-one risk-reward ratio down to the prior two-year low of .9257. 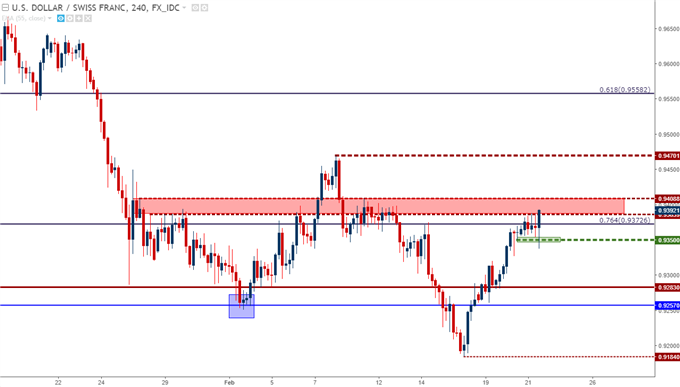