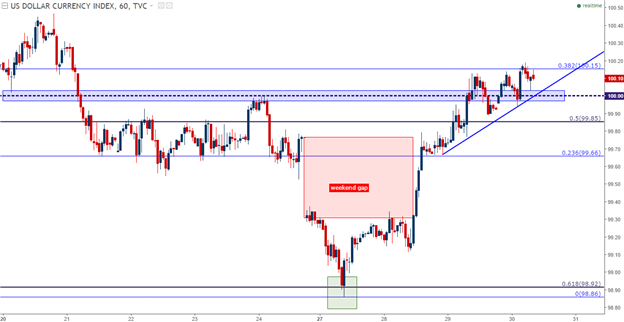 - The week of Fed-speak continues: Today brings four more Fed-speeches to the fray with Loretta Mester at 9:45 AM ET, Robert Kaplan at 11:00 AM, John Williams at 11:15 and then William Dudley at 4:30 PM. Neel Kashkari closes the week with a speech tomorrow at 10:00 AM.

- In a speech yesterday, Eric Rosengren became the first Fed member to mention the possibility of four rate hikes in 2017 (three more from here); but USD-strength was muted by more centralized-outlooks from Mr. Charles Evans and Mr. John Williams.

To open this week, we explained how 14 different Fed speeches on the calendar would likely bring some element of drive to capital markets.

In a speech yesterday, the President of the Boston Fed, Eric Rosengren, said that the Fed should hike rates three more times this year for a total of four hikes in the calendar year of 2017. This would be the first anyone has heard about a fourth hike: The Fed came into the year saying that they were expecting three; and for much of that time, markets were expecting two. Even as we came into March, the expectation for a hike at the Fed’s meeting in the middle of the month were hovering at around 30-40%, and it wasn’t until John Williams’ (President of the San Francisco Fed) speech just hours ahead of President Trump’s Joint Address to the Union that those rate hike odds for a move in March began to come-alive.

Also speaking yesterday were Charles Evans of the Chicago Fed along with another speech from Mr. Williams. Mr. Williams talked up a total of three rate hikes for this year and Mr. Evans talked up the prospect of another ‘one or two’ hikes this year; so this likely took some of the sting away from that ‘four rate hike’ statement.

The U.S. Dollar continues to build in a bullish manner on short-term charts after gapping-lower to start the week. The zone between 99.85 and 100.00 could be especially interesting for ‘higher-low’ support in the effort of bullish continuation in the U.S. Dollar.

In this week’s fundamental forecast for the Euro, we looked at the prospect of inflation in the Euro Zone finally moving the European Central Bank away from monetary accommodation in the form of QE. With the ECB’s bond buying program set to expire in December, markets have been attempting to read the tea leaves in the effort of discerning whether the ECB is ready to let QE end, and perhaps even go with an interest rate hike before too-long.

We still do get some data on this front tomorrow when Euro-Zone CPI is released, and we’ll also get German Unemployment numbers – but this morning we got German inflation and this came-in well-below expectations, printing at 1.6% versus an expectation of 1.8%.

Questions around Euro-Zone inflationary pressures combined with European political risk as we go into French elections in April could provide a bit of pressure to the Euro. And for EUR/USD, we can add that recent incline in the Greenback to see a pullback in EUR/USD.

For those that do want to look at bullish exposure in EUR/USD, the level around 1.0700 will likely be key for such an approach. This is the 50% retracement of the most recent bullish move, from the February low up to the March high. 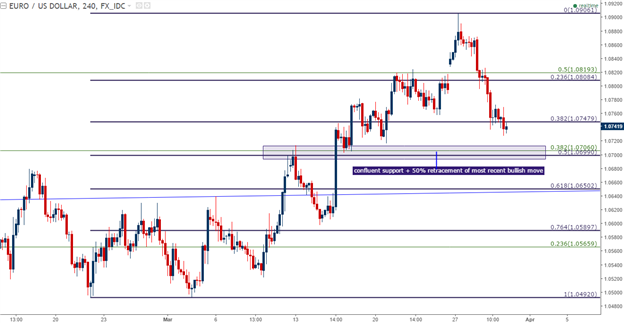 Yesterday marked the triggering of Article 50 when British PM Theresa May notified the E.U. of the U.K.’s intention to leave the bloc. For its part, the British Pound was fairly muted as no trends immediately transpired. What is interesting, however, is what happened the day before Article 50 was triggered, and this is when Mr. Ian McCafferty of the Bank of England gave commentary regarding his outlook for inflationary pressure and growth in the U.K. economy. 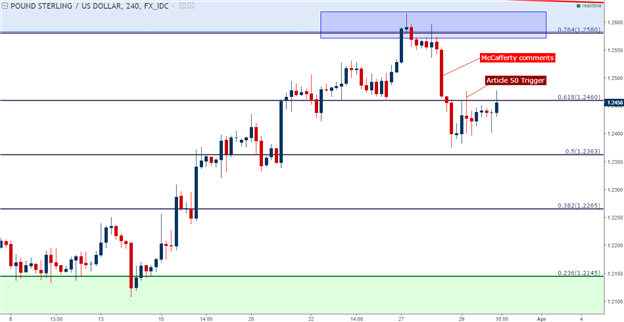 Mr. McCafferty’s outlook wasn’t very positive, and this is despite the recent run of growing inflationary pressure in the U.K. that even got a vote for a rate hike at the Bank’s last rate decision. Within the meeting minutes of that rate decision, we heard that Ms. Forbes may not be the only MPC member voting for a rate hike at future decisions; but taken from Mr. McCafferty’s comments two days ago, it would appear that he is not one of the members that’s on the fence.

The elephant in the room of the U.K. economy at the moment is inflation derived from the ‘sharp repricing’ in the British Pound after the Brexit referendum. When a currency drops 20% or more in a short period of time, companies importing and selling products in that economy will likely take notice. And given that most companies likely want to protect whatever margins they have, a rapidly falling currency will likely bring on inflation as those companies raise prices to try to offset the weaker exchange rate.

The sharp repricing happened. The British Pound fell dramatically after the Brexit referendum, but it was the ensuing dovish campaign from the Bank of England that really hit the currency, as the BoE continually pressed dovish accommodation into markets for fear of Brexit risks. With the BoE so heavy-handed on policy accommodation, there was simply no reason to want to be long GBP, and in early-October, we saw the ‘flash crash’ develop in the currency as there was a dearth of buyers.

And then in November – the BoE sparked a short-term bullish run in the Cable when they increased their inflation forecasts.

In January, we heard from the Chief Economist at the BoE, Mr. Andy Haldane, when he issued a mea culpa around the BoE’s stance around Brexit. Mr. Haldane had some interesting quotes in that speech, one of which was that the economics profession had their ‘Michael Fish moments’ around the 2008 collapse and then again around Brexit. The BoE appeared prepared for a full-scale business slowdown around Brexit that simply hasn’t happened. What has happened is that sharp repricing in the value of the British Pound, which is now building more and more inflation in the U.K. economy.

But then in February, the Bank of England made a rather puzzling move when they upgraded their expectation for growth in 2017 by a full 42% (to 2% from 1.4%); while also downgrading their inflation forecasts for the year. This provided another dose of weakness into GBP as it became just another example of where the BoE as appearing unmoved by rising inflationary forces.

But inflation in February was very strong. And then in early March, we saw that dissenting vote at the BoE’s rate decision when Ms. Forbes voted for a rate hike (and then accompanied her decision with a write-up in The Telegraph); and this gave the appearance that we might finally be seeing a shift within the BoE towards a more-hawkish outlook. The combined impact of this one-two punch sent Cable right back to resistance – that is, until Mr. Ian McCafferty spoke two days ago.

So, at this point, we have the very legitimate possibility of a bullish theme developing in GBP around inflation, with the rationale being – the stronger that inflation runs, the ‘more motivated’ the Bank of England might be to pull away dovish accommodation and, maybe even eventually investigating higher rates. The longer-term formation here is still range-bound, so for traders looking at directional stances in Cable, they’d likely want to wait for this range to be resolved before attempting to push the pair-higher: 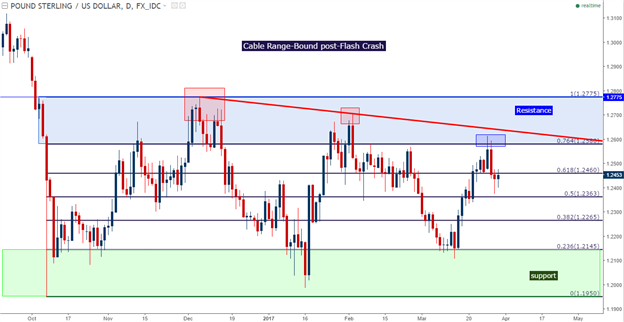