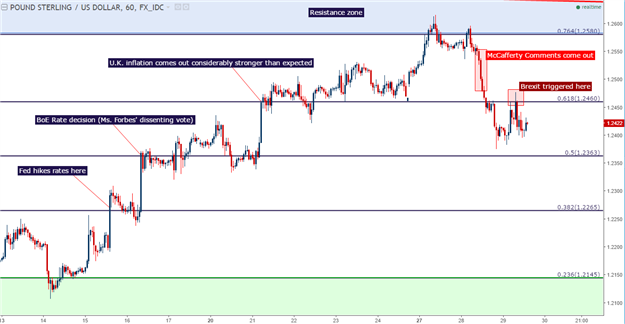 GBP/USD Technical Analysis: Despite the Drivers, the Range Still Applies

Near-term price action in Cable had grown quite bullish after the Federal Reserve’s March rate hike. After running down to test the zone around 1.2100 just ahead of that hike, prices had moved all the way-up over the 1.2600 level to open this week. In our last article, we looked at how the combination of U.S. Dollar weakness along with the recent tick-higher in U.K. inflation had contributed to the further-development of that move; and this continued in a rather consistent fashion as price action in GBP/USD exhibited a clean-run of higher-highs and higher-lows.

The premise of this move was very much driven by the prospect that the Bank of England may have to respond to these stronger inflationary forces by rolling out a series of ‘less loose’ policy options and, perhaps even eventually, looking at the prospect of a rate hike. This was very much along the lines of what Ms. Kristin Forbes was pointing out when she decided to dissent at the BoE’s most recent rate decision as she gave the first BoE vote for an actual rate hike after the Brexit referendum.

This theme faced pressure yesterday around the comments of MPC member, Mr. Ian McCafferty. Mr. McCafferty gave a very sanguine outlook towards inflationary pressures while also providing a fairly bearish outlook for forward-looking economic conditions. Mr. McCafferty appeared to be in no hurry to hike rates, and this started a pullback in that recent bullish run in the Cable that’s extended into this morning as the U.K. triggered Article 50.

So, while the headlines will likely associate this recent bout of weakness in the British Pound with the Article 50 trigger, deductively that makes little sense as the bulk of this move transpired after Mr. McCafferty allayed the expectation of near-term rate hikes and well-ahead of Article 50.

This is important because it’s that potential for ‘less loose’ policy that will likely drive GBP price action in the coming months. And on that front, we’re unlikely to get any confirmed information until either a) U.K. inflation prints continue to come-out well-above market expectations or b) the Bank of England capitulates on the idea of uber-dovish monetary policy as a proactive response to Brexit, which we’ve already seen early signs of with Ms. Forbes and the meeting minutes from the last BoE rate decision. For the second of those scenarios, we’ll likely be waiting until the next Super Thursday at the BoE to get updated inflation expectations, and that doesn’t happen until May 12th.

Longer-term price action in Cable remains in the range-bound formations that’s denominated GBP/USD price action since the ‘flash crash’ in October. Until this range breaks, there is little reason to expect as such. 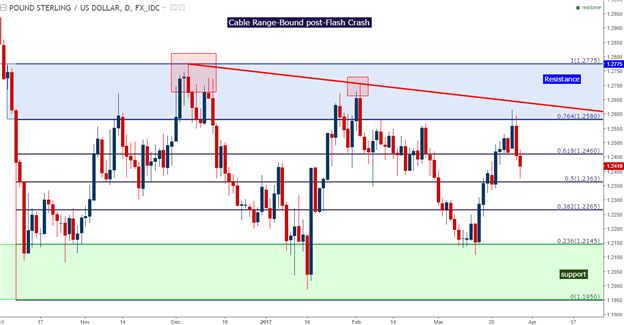 Short-term: There are setups that can be worked with on both sides of GBP/USD. For those looking to play strength into the longer-term zone of resistance around 1.2600, stops could be set below the prior swing-low around 1.2318 to look for a better than 1-to-1 risk-reward ratio. And on the bearish side, traders could look at stops above the 1.2500 psychological level accompanied with targets cast towards 1.2300, and/or 1.2250. 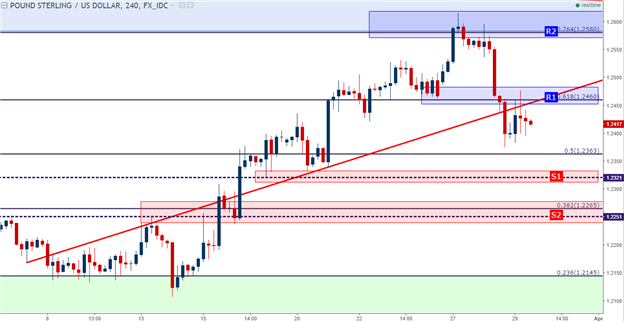