- News Tuesday that UK inflation hit 2.3% in February, up from 1.8% the prior month, sent the British Pound up sharply.

- The data increase the likelihood of an interest rate hike from the Bank of England to combat higher prices.

Consumer price inflation in the UK shot above the Bank of England’s 2% target in February for the first time since November 2013, increasing the likelihood of an interest rate rise and boosting the British Pound. The figure came in at 2.3%, above the 2.1% expected by economists and the highest since September 2013.

It was the fourth successive increase in CPI inflation, caused by the previous weakness of the currency and the prior strength of global oil prices, and leaves inflation only just below nominal wage growth. If a squeeze on real incomes translates into lower retail sales growth, it could lead to a broader economic slowdown.

Moreover, inflation is likely to rise further later this year, with 3% or even 3.5% figures possible as consumers face higher prices for food, motor fuel and other products. Many energy suppliers have recently raised their prices and sterling’s devaluation will likely to continue to have an impact, although that should be offset by the recent weakness of crude oil.

Meanwhile CPI-H, which includes a proxy for housing costs and is the Office for National Statistics’ new preferred inflation gauge, rose to 2.3% in February from 1.9% in January.

Taken together, the numbers suggest a rising threat of an interest rate increase later this year, foreshadowed by last week’s news that one member of the central bank’s Monetary Policy Committee voted for a hike at the MPC’s latest meeting. In the months to come she could well be joined by others, potentially lifting the Pound despite the approach of Brexit.

In a separate release, data showed a better than expected deficit of £1.1 billion in public sector net borrowing in February after January’s revised £11.78 billion surplus as workers completed their self-assessment tax returns. However, the figures, the first since Chancellor of the Exchequer Philip Hammond’s Spring budget, suggest a continuing improvement overall in the UK public finances. 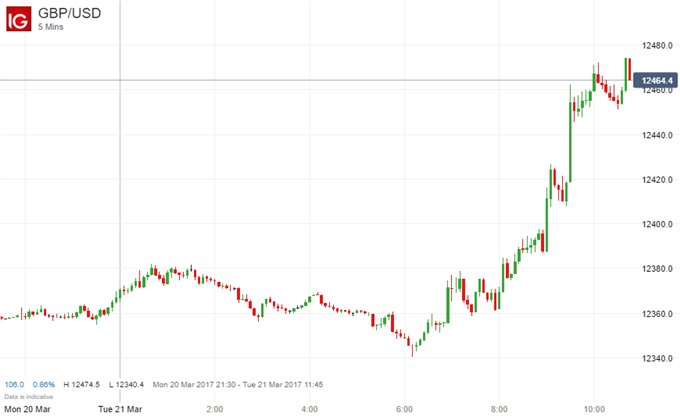