In our last article, we looked at the budding up-trend in Cable as the pair had just run-up to fresh highs after the U.K Supreme Court ruling regarding Brexit. As more certainty has been transmitted around Brexit discussions over the past few weeks, price action in GBP has firmed to propel GBP/USD up to fresh seven-week highs; leading into this morning’s Super Thursday event out of the Bank of England.

At the last Super Thursday in November, the BoE adjusted inflation forecasts higher in response to the ‘sharp repricing’ in the value of the British Pound from the Brexit referendum, and then ensuing campaign of dovish policy from the Bank of England. And while Cable started the month of October with a dearth of demand, seeing a ‘flash crash’ in the early portion of the month as there were simply no buyers in the market; November started off on a far different note as bullish price action developed in response to the BoE’s shift on inflation expectations. This kept Sterling strong throughout the month of November, as the currency was one of the few from around-the-world that was actually stronger than the U.S. Dollar throughout the month.

This morning’s Super Thursday was quite a bit different than the last. At this morning’s meeting, the Bank of England ratcheted growth expectations quite a bit higher, bumping their expectation for GDP growth this year higher by 42% (from previously expecting GDP growth of 1.4% up to 2%). But at the same time, the BoE moderated inflation forecasts lower – taking their expectation for 2017 inflation down to 2.7% from 2.8%, with 2018 unchanged at 2.6%.

The net result of these moves around expectations was Sterling weakness, as the more moderate inflation expectations could make the prospect of a potential rate hike later in the year less-likely. But of particular note is how aggressively the growth forecast for 2017 was upgraded; and this could be part of the reason that support developed in GBP/USD on the heels of this morning’s news.

On the chart below, we’re looking at the hourly setup in GBP/USD with emphasis on the bullish price action over the past three weeks. The Fibonacci retracement that’s applied on the chart can be found by connecting the high from September 22nd down to the low of January 16th; and notice that current price action is trying to dig-out support around the 50% retracement of this move. Just below this zone of support is another interesting zone around the 38.2% retracement of the same move, showing at 1.2418. This level had provided two rather rigid bounces, and had previously set resistance just after Theresa May’s Brexit speech. This can be a novel area to investigate for stop placement on bullish, top-side approaches. 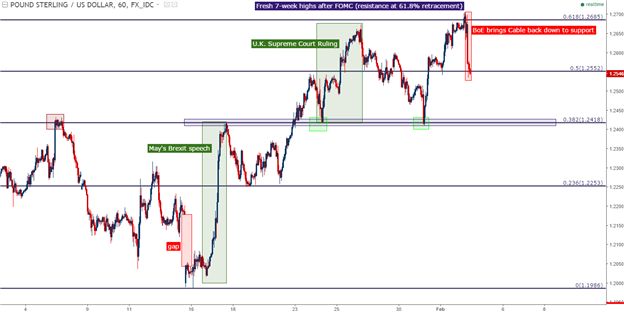