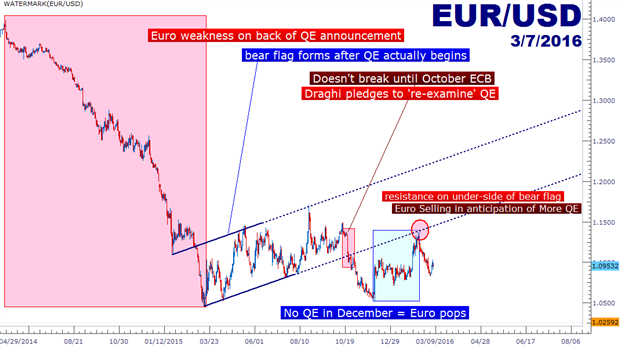 EUR/USD Awaits the Next Central Bank Salvo from the ECB

- The European Central Bank meets on Thursday, and again, many are expecting some type of action out of the bank. EUR/USD is selling-off ahead of this rate decision, but the bigger question is whether the ECB will actually deliver an increase to QE at this meeting.

- The primary source of strength in global markets at the moment appears to be hope for Central Banks to do more. February 11th marks the lows in many equity indices, and this was the start of day two of Ms. Yellen’s Congressional Testimony. Markets construed that testimony very dovishly with rate expectations priced-out of the market for the remainder of the year. But will the Fed deliver? They meet next Tuesday and Wednesday, with the announcement on Wednesday afternoon.

The Euro Awaits Draghi, Thursday at 8:30 AM ET: This has become somewhat of a pattern; an upcoming ECB meeting is seeing traders price-in the expectation for even more action from the European Central Bank, with the hope being that this will finally be the move that helps the Euro-zone move away from the deflationary tendencies that have ravaged the continent in the post Financial-Collapse environment.

We had looked at the background going into this ECB decision in last Friday’s article, Prepare to Usher in Another Wave of Central Bank Volatility, and with the Bank of Japan and the Federal Reserve meeting next week, traders and investors should brace for increasing volatility.

After fear permeated markets in August and September of last year, calm was restored as Central Banks offered a soothing message to investors: The Fed backed off of rate hikes with the ‘hawkish hold’ in September, and followed that no-hike decision in September with multiple comments of support in October. Also in October, the European Central Bank pledged to ‘re-examine’ QE, and even the Bank of Japan was largely thought that to go for another increase or extension to their program. It was this sense of Central Bank support that pulled the world back from the ledge in October and November, and this is what eventually led to an environment stable enough for the Fed to have hiked rates in December. This is the ‘feedback loop’ that we’ve been discussing of late, in which the Fed appears to be responding to stock prices. When prices go down, the Fed displays a dovish stance. When prices go up, they get hawkish again, and that causes fear which brings prices back down…

But December brought a far different tune: We saw the European Central Bank avoid increasing their QE program as many had hoped and instead just cut the deposit rate deeper into negative territory, and the Bank of Japan pulled back as well. This led to the initial signs of risk aversion in the last two weeks of 2015, and that led to an onslaught of ‘risk-off’ to start 2016. And that theme of fear pretty much was the predominant theme across markets until the second week of February when Ms. Yellen spoke in front of Congress. In that testimony, she gave a less-evasive answer towards negative rates than she had the day prior, alluding to the fact that this may be a policy option for the Fed should global weakness persist. Since then, we’ve seen rate hike expectations get priced out of the market for the remainder of the year, highlighting a largely dovish take on the current stance of the Fed. 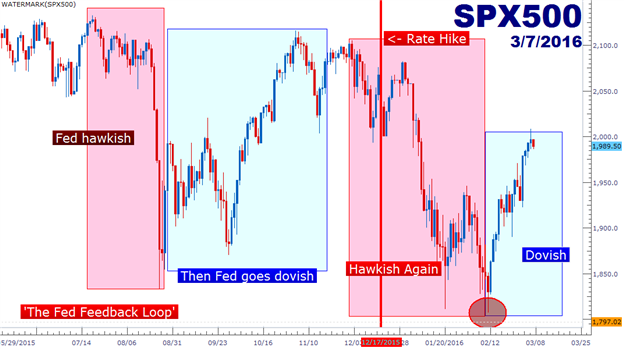 On the morning of day two of Ms. Yellen’s Congressional Testimony, stocks were sitting near lows while risk aversion was showing in pretty much every market on Earth. But as Ms. Yellen assuaged the fears of Congress, risk assets began showing signs of life as markets began to hope that the Fed would not continue hiking while much of the world sits in a precarious position. We had identified this dislocation towards the end of the year, noting that the combined pressures of a major and prolonged sell-off in commodities, combined with continuing pressure in China while the Fed looks to raise rates were likely going to be too much for the global economy to bear.

It didn’t take long for those fears to hit. But now with stock prices moving higher again on the back of hopes for Central Banks to keep doing what they’ve been doing (more loose monetary policy), can investors and traders actually depend on them to deliver this time, unlike what happened in December?

Or perhaps more worrying, are we getting to a stage where those same Central Bank tools are beginning to deliver diminishing marginal returns?

The Bank of International Settlements, or BIS, which is often considered the Central Bank for Central Banks, had some comments on this topic over this weekend. The BIS warned of a ‘gathering storm’ in the global economy as Central Banks are running out of monetary-policy options. They alluded to the growing possibility of wide-spread negative rates as Central Banks search for any ways to stoke growth amid a threating backdrop of falling prices and slowing growth.

They essentially point out that, despite the numerous cannons and bazookas worth of liquidity that have been directed at global markets in the post-Financial Collapse world, growth still remains lackluster and asset prices remain elevated. Doing more of the same, which may not even be possible considering that many Central Banks are already carrying stretched balance sheets, may not bring more favorable results.

December seemed like it could’ve been a turning point in the fact that Central Banks did not opt for the increased-liquidity policies that had become the norm. The ECB and BoJ avoided increasing their QE programs while the Fed hiked and warned markets of even more oncoming hikes. This pressure was too much for the global economy to bear, and Central Banks appeared to have pulled back from their designs of ‘less loose’ policy.

The big question now is whether these Central Banks will follow-thru with these hopes for ‘more loose’ policy, and whether or not markets will cheer these announcements in the same way that we’ve become accustomed to.

The ECB meets on Thursday and many are expecting an increase to the ECB’s QE program. Since that February 11th low in stock prices, we’ve also been seeing EUR/USD move lower ahead of this March ECB meeting. Notice on the chart below how the most recent trend-line (in purple) has now come-in as new resistance. The price zone from 1.0940-1.0950 has a couple of different Fibonacci retracement levels, so traders can use this to plot a short approach. Let price action break below to prove that bears will be able to push price action through this support, and then look to get short on resistance in the same vicinity as old support. 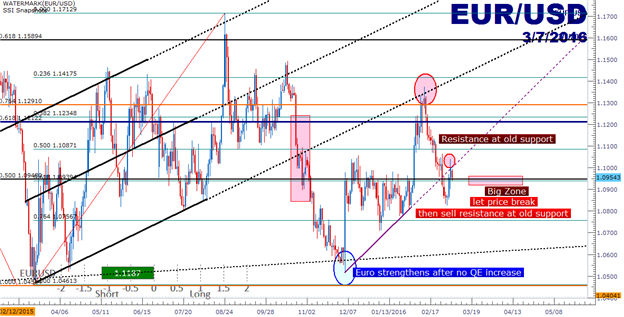 The week after, we hear from the Bank of Japan and then the Fed. The big sticking point for next week will be how aggressively the Fed is looking to hike rates for the remainder of the year.

Should the Fed take on a hawkish-stance, similar to what they had taken in August/September of last year when they didn’t hike but warned that hikes were coming; we can see risk aversion come right back into markets as it becomes even more obvious that the days of 2011’s QE-driven asset price gains are further in the rear-view mirror.

Until then, investors can seek the safe harbor of Gold, and as we can see from the past couple of months, many are directing capital flows towards as we see increasing odds of even more fast and loose monetary policy from these major central banks.

For now, hope reigns supreme. The next week-and-a-half will tell us if that hope is unfounded.