The ECB’s Fireworks Turn Out to be Mere Sparklers

- The European Central Bank meeting this morning was largely disappointing, and the Euro is rallying in record-fashion on extremely high volume. Today is the largest volume day in EUR/USD on FXCM records.

- Sentiment flipped very quickly on the back of this morning’s news, with retail traders moving to a net short EUR/USD position. We now furnish real-time SSI on our updated DailyFX site.

- With a pivotal NFP report ahead, traders should exercise extreme caution, as this morning highlighted a dearth of liquidity across markets, and this is a huge risk for the remainder of the month.

Today has been a wild ride across markets, and it started off with a rather dramatic bang. Like most traders around the world, I was cozied up to my terminal awaiting the ECB statement to drop at 7:45, as usual, when something very strange began to happen. The Euro started running… and this wasn’t just a mere pre-announcement positioning-type of move, no. This was as if something big had just happened, yet we were still 8 full minutes from the expected release. EUR/USD had spiked ~50 pips in less than two minutes, and EUR/JPY had moved up by 60 really very quickly. You can almost detect my befuddlement in the below tweet at 7:38 AM ET this morning:

As Euro prices continued to ascend, the following few minutes brought out a rumor that a major financial publication (who we will not name out of professional courtesy) had prematurely published a report stating that the European Central Bank ‘had’ left the deposit rate unchanged. ‘Had,’ being a key word there – as in the past tense of ‘does.’ So, this pretty much looked like a leak, not too dissimilar from the leak that we had in August of the July FOMC minutes. We discussed that ordeal in the market talk piece on August 20th. By this time, at approximately 7:40, EUR/USD was higher by more than 130 pips from the low only three minutes earlier.

But at 7:45 AM ET, the ECB statement was finally released (which felt like an eternity as price action was surging higher), and we found out that the European Central Bank DID actually cut the deposit rate; so the leak was wrong. But the deposit rate was only cut by 10 basis points, which when taken with the continued deflationary pressures being seen throughout Europe combined with the previous assurances from Mr. Draghi that the ECB will do ‘whatever it must,’ came in on the disappointing side of expectations. So, we saw Euro initially spike down as news that the deposit rate was cut, but then it ran right back up as the ‘only 10 basis points’ part of the report permeated through markets. Price on EUR/USD ran as high as 1.06899 during the 7:45 candle, and as low as 1.05168; amounting to a range of a whopping 173.1 pips in a single minute while this release was coming out. 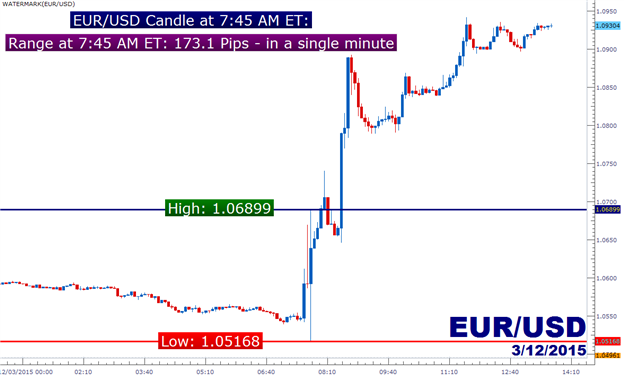 As you can tell from the above chart, the volatility did not stop at 7:45, and still hasn’t as of this writing seven hours after the ECB statement was released.

Mario Draghi took the podium at 8:30 AM, and largely disappointed markets. After Mr. Draghi’s multiple that the ECB would do ‘whatever it must,’ only two weeks ago, followed by a threatening warning signal last week, expectations were high for a massive increase to the bank’s stimulus program over the current €60 Billion per month allotment.

But there was no increase to the ECB’s bond buying program announced this morning; merely an extension that runs until March 2017. The only big delivery today from the ECB was the 10 basis point deposit rate cut, which judging by price action thus far, has been a massive disappointment. Right now EUR/USD is over 435 pips off of this morning’s lows. Even while writing this article, EUR/USD has run higher by another 30 pips and, frankly, there is no end in sight with such aggressively strong price action as we’ve seen no indications yet of slowing down.

But the carnage hasn’t been contained to just the currency world, the DAX (GER30) is down by 5.5% since the release at 7:45 this morning, and the S&P has traded lower by almost 2.5%. Stocks are selling off heavily because that hope of a bigger QE package out of Europe had stoked inflation and growth expectations. Because this morning’s news came out on the disappointing side, we’re now seeing some of those bets behind the ‘looser for longer’ theme beginning to come out of the market.

Perhaps more troubling – this morning’s announcement may indicate bigger problems brewing in the EU. If the ECB was not able to get enough support to increase the bond buying program right now, as deflation is showing up in even the established, major economies within the Euro-bloc, what is going to happen further down-the-road if inflation continues to disappoint? And will it be too late at that point? While nobody knows for certain, if this morning’s disappointment was any indication, the result probably won’t be pretty as the European Union continues to grapple with social, economic and political issues that can all question the long-term viability of the Union. When we combine that with border closings and a migrant crisis, there are a significant set of risks ahead for the continent.

But this is not without precedent. The ECB has disappointed before only to come back to the table with something significant, as we had recounted last week in the article, The ECB Fires a Warning Signal, but Will They Deliver in December? The answer there was a definitive ‘no,’ as we are seeing today; but in May of last year, Mr. Draghi had announced that the ECB would investigate QE and get back to markets at their next meeting in June. In June, they largely disappointed, very similarly to today. EUR/USD rallied from juts above 1.3500 pre-release to 1.3700 later in the month. But in July, the ECB unleashed a cannon of stimulus, and this announcement is what led to that run of ~3000 pips that lasted until March of this year. 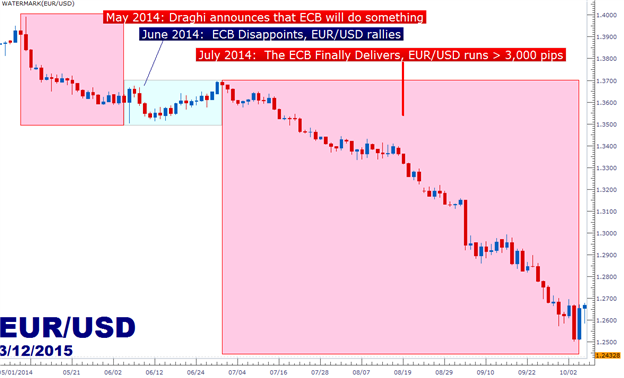 So, this type of disappointment is not without precedent, and the ECB may be just warming up for something bigger in the early portion of next year. But they also may be nearing a point in which political support for enhancing the program isn’t strong enough to do anything larger. We don’t know yet, and the coming months will likely show the fault lines amongst various European politicians as they discuss the matter in the media.

But for traders with significantly shorter-term views, the Euro is extremely strong right now, and shorting here or setting up short positions can be daunting. For those that do want to take a longer-term view on a short position, let EUR/USD continue to rip through these levels of resistance. The longer-term bear-flag that was established through much of this year could offer a very requisite level of resistance to look towards should this strength continue. The initial break of this flag after the October ECB announcement was one of the two methods that we recommended to watch for trend-themes in Euro.

But for now, the Euro is putting in a record-like run on the back of the heaviest volumes that we have on records for FXCM. We’ve seen SSI flip very quickly, as David Rodriguez had outlined this morning, so short positions should be aware. This is a rocket ship right now, and this may continue for a bit. Markets will likely be watching data out of Europe very carefully moving forward, with the hope or expectation for an increase to the bond buying program in the coming months.